We know sound waves are longitudinal fluctuations in the pressure of the air (or other medium) in which the sound is traveling. This is a fluctuation above and below normal atmospheric pressure and is measured in pascals (\(\text{Pa}\)), the standard unit of pressure. If you tried to report an average value of the fluctuation you would get zero since the pressure varies from above to below normal atmospheric pressure. We could just give the (maximum) amplitude of the fluctuation but what is usually done is to report the rms value which is the square root of the average of the squares of the amplitude. By first squaring the amplitude and then taking an average and then a square root you have a kind of average value that is not zero. In the chart below the root mean square (\(\text{rms}\)) variation in pressure from normal atmospheric pressure (in pascals \(\text{Pa}\)), the sound intensity level (\(SIL\) in \(\text{dB}\)) and the intensity (\(I\) in \(\text{W/m}^{2}\)) are given for several sounds.

Both sound intensity (\(\text{W/m}^{2}\)) and sound intensity level (\(\text{SIL}\)) are numbers that can be measured precisely in the laboratory (objective). The human ear, however, is an imperfect measuring instrument. We hear better at a mid-range of frequencies than we do at very low or very high frequencies. The Loudness Level (\(L_{L}\)) scale is a subjective measurement of loudness. This scale is arrived at by asking real humans to compare the loudness of different notes and an average is taken for many people (subjective). The units of the Loudness Level are the phon.

Notice there is a dip in all the curves between \(1000\text{ Hz}\) and \(5000\text{ Hz}\) indicating we are more sensitive to these frequencies and this is true for all loudness readings. For example suppose we perceive a sound at \(4000\text{ Hz}\) to be \(45\text{ phons}\) (labeled by a blue X in the diagram). The chart shows that at this loudness and frequency the \(\text{dB}\) reading in the laboratory is actually around \(36\text{ dB}\) (dotted line to the \(\text{SIL}\) axis). So we perceive a sound of \(36\text{ dB}\) (measured in the lab) as being much louder (\(45\text{ phons}\)) if it occurs at \(4000\text{ Hz}\). Most other animals have a similar curve allowing them to hear better in a certain frequency range although the dip is usually much more narrow and does not go as low as for humans. Many animals can hear frequencies above and below what humans can hear, but we can hear much softer sounds in this range of frequencies than almost any other animal, owls being an exception. Your cat or dog can hear higher frequencies than you can but you can hear softer sounds in the \(1000\text{ Hz}\) to \(5000\text{ Hz}\) range.

This improved ability to hear softer sounds in the \(1000\text{ Hz}\) to \(5000\text{ Hz}\) range is not surprising once you realize these are important frequencies for human speech; our hearing mechanism is built to hear human voices better than sound with much higher or much lower frequencies. This greater sensitivity around \(3500\text{ Hz}\) is due to the tube resonance of the auditory canal (see chapter 12 for tube resonance and chapter 10 for a picture of the auditory canal). 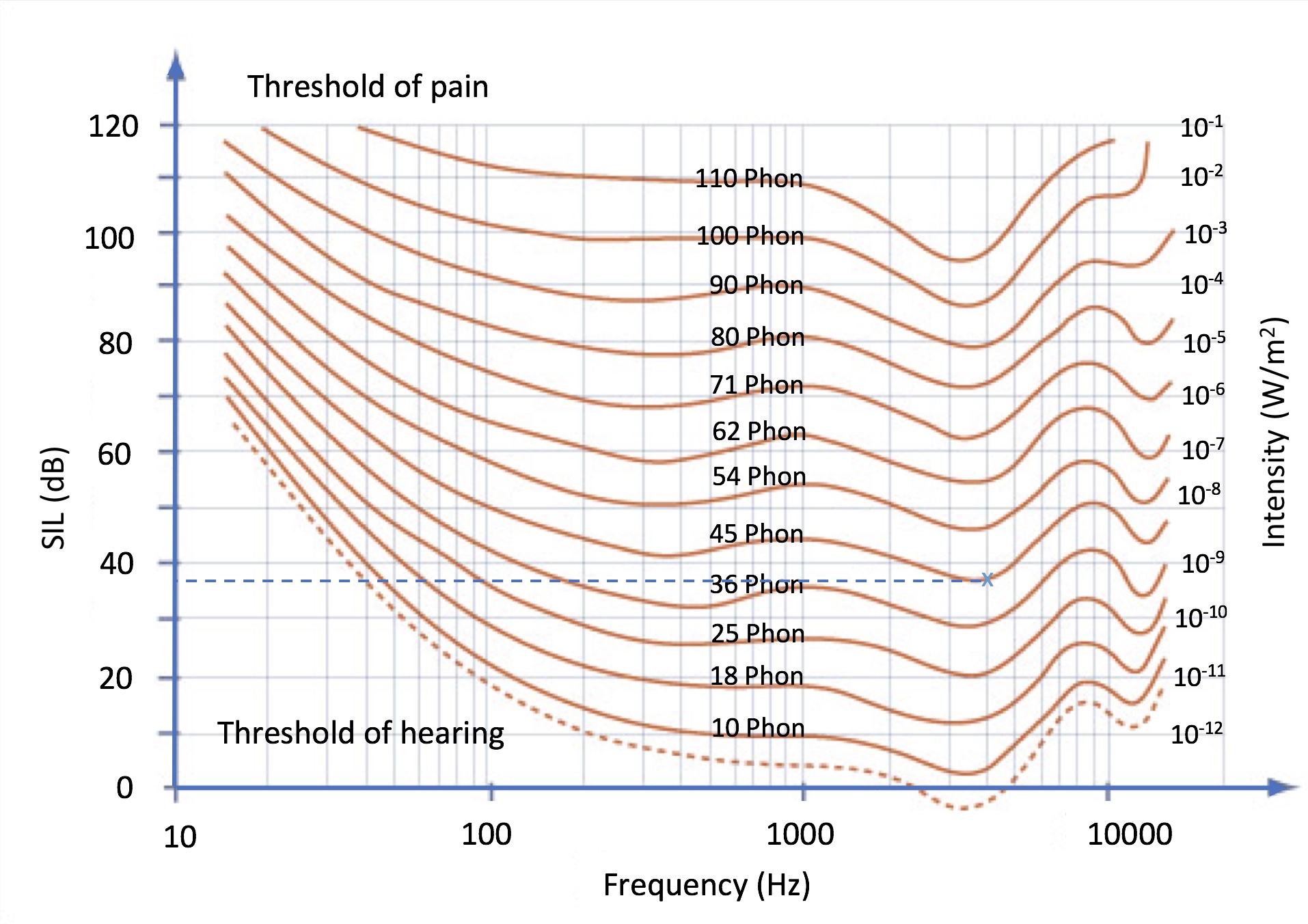