Suppose we took the components of our square wave (above) and instead of plotting the sine function we just make a bar graph of the amplitude and the frequency number. The result is called a Fourier Spectrum and is a kind of short hand for the waveform. Instead of drawing the complicated square wave we can simply list the amplitude and frequency number for each component as shown below: 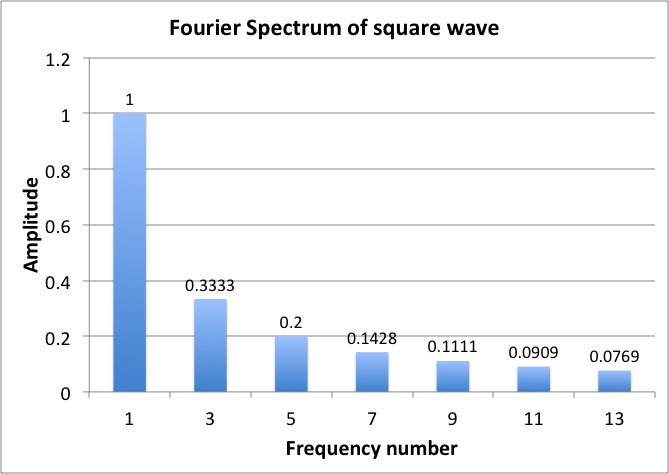 The process of breaking down a waveform into its component sine and cosine waves (the reverse process from Fourier synthesis) is called Fourier Analysis. Fourier analysis and synthesis can be done for any type of wave, not just sound waves. Generally you don't get a nice bar graph like the one above but you get something similar; a graph that tells you how much of each component sine wave is present for each frequency in the sound sample. There are various programs that will do this (for example Audacity is a free sound analysis program we will use to analyze sound waves) and even some smart phone apps (for example SignalScope or oScope for the iPhone) which will show the Fourier spectrum of a sound wave. The Fourier spectrum shows which frequencies are present and the relative strength of each frequency. The lowest frequency present is called the fundamental frequency. The following examples show the waveform (what you would see on an oscilloscope) along with the Fourier spectrum for several different instruments:

As mentioned above, if you use Audacity or a smartphone app (as in the above YouTube example) to measure the Fourier spectrum of a complex sound wave the graph is a bit messier than the bar chart shown above for the square wave. This is because the Fourier analysis process is limited in accuracy by the number of samples taken during the sampling process. We will not go into the details of Fourier analysis here but below are the Fourier spectrums, measured by Audacity, of the four sounds in the previous simulation:

If we go back to the components of the square wave in the bar graph in this section, you will notice that we can reproduce the square wave with just a few numbers from the graph (we really only need the amplitudes since the frequency numbers are just a sequence of whole numbers- odd whole numbers for the square wave). If we want to store a picture of the wave we would need a lot of disk space on our computer. If instead we store the numbers (amplitude and frequency number) and reconstruct the wave from these components when we need it we can keep the same information in much less disk space. As we will discuss later, the various file formats used to compress pictures, sound and movies (JPG, MPEG, etc.) are based on this idea and are in fact versions of the Fourier analysis.

You will also notice from the simulations and exercises that for the square wave, the more terms that are included in the Fourier series the more the wave looks like a square wave. A pure sine wave is smooth and has no specific time location, no start or end. Because of this smoothness and unspecific time only one term is required in the Fourier Series to describe it. The square wave, however, has a very sharp edge at a specific time. This requires many frequencies in the Fourier Series (technically an infinite number to make a perfectly sharp edge). When short pulses of sound such as clicks, cymbal crashes and percussion strikes are Fourier analyzed they show a large number of frequencies and the shorter the sound pulse, the more frequencies are present. This is an example of the uncertainty principle which says there is a trade off in what you know about when a sound occurs and what you know about the frequencies that are present in the sound. For the sine wave you can know a lot about frequency (it has exactly one number representing frequency) but not much about when it occurs. For a cymbal crash you can know more about when it occurs but at the cost of having to worry about many frequencies. The time/frequency uncertainty principle is only one of several found in physics but is the only one we need for understanding sound.