Recall that speed of a wave on a string is determined by the density and tension; \(v=(T/\mu )^{1/2}\) where \(T\) is the tension in the string in Newtons and \(\mu\) is the mass per length in kilograms per meter). We also know that once the speed is fixed, frequency (in Hertz) and wavelength (in meters) are inversely proportional; \(v=f\lambda\). So the three parameters that determine the frequencies of a string are tension, density (mass per length) and length. The density of a string is determined by thickness and mass; a thick, heavy string is more dense so waves travel more slowly.

For standing waves on a string the ends are fixed and the string does not move. Places where the sting is not vibrating are called nodes. This limits the wavelengths that are possible which in turn determines the frequencies since the speed is fixed and \(v=f\lambda \). The lowest frequency is called the fundamental or first harmonic. For a string, higher frequencies are all multiples of the fundamental and are called harmonics or partials. The more general term overtone is used to indicate frequencies greater than the fundamental which may or may not be harmonic. This can be a bit confusing because for strings there are only harmonics and the second harmonic is the first overtone, etc. The various harmonics (overtones) are also called the normal modes of vibration of the string. 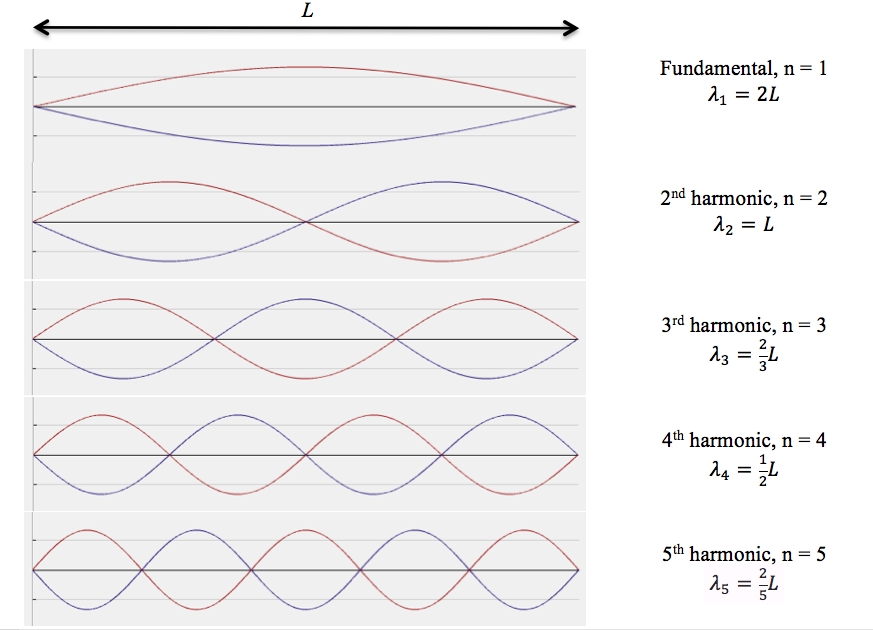 Notice that the higher harmonics have nodes in other locations besides just at the ends. In between two nodes is a region where the vibrations are a maximum. These are called anti-nodes. The fundamental has one anti-node the 2nd harmonic has two anti-nodes.

Once the string density and tension are chosen the speed is fixed and the frequencies will depend on the wavelength as shown in the following table. Notice that the harmonics are all multiples of the fundamental.

In Chapter 4 we defined resonance to be the case when the amplitude of vibration got larger because the driving frequency matched the natural frequency. Here we see there are many natural frequencies. This means there are many resonance frequencies. For a string these are all harmonics (whole number multiples) of the fundamental. In a real string that is plucked or bowed, it is often the case that several of these resonance frequencies are present at the same time. This means that musical instruments usually produce not only a fundamental, but also harmonics that give the instrument its timbre.