There are probably an infinite number of ways to connect a string to a resonating body to form a musical instrument and any number of body shapes. Here is Wikipedia's list of stringed instruments with links to information about each one. There are also several variations in how the string is excited and how the string vibration is coupled to the body of the instrument. It is also possible to turn the vibrations into an electronic signal for amplification, as we will see later.

Stringed instruments have strings with string harmonic resonances connected to a surface which has additional overtones, some of which are not harmonic. Most stringed instruments also have a hollow body with an opening (called the f hole or sound hole in a violin and some guitars) so there are air resonances associated with the body cavity; the Helmholtz resonances we saw in Chapter 4 and mentioned above. The shape of the hole developed over time by trial and error to provide the most sound as explained in this article.

It is this combination of string, surface and Helmholtz resonances that make each type of instrument, and in fact each instrument unique. A primary difference between expensive violins such as a Stradivarius build in the late 1600s, early 1700s (worth millions of dollars) and a cheaply made modern violin is that the resonance frequencies of the Stradivarius are more distinct, have a larger amplitude and are closer to the frequencies of the notes played by the string. These resonances make it easier to reach a given note and the note being played sounds louder. (It should be noted, however, that blind listening tests can rarely distinguish between a Stradivarius and a well made modern instrument selling for tens of thousands of dollars.)

For most stringed instruments the bridge transmits vibrations from the string to the body of the instrument (electrical pickups will be discussed later). Many guitar and violin bridges are carved with interesting shapes. This makes them more flexible so that they are closer to the resonance frequencies of the string and body. This also means, however, that they can act as filters since they do not transmit some frequencies as easily. Some bridges are slightly rounded so that the length of the string changes slightly as the string vibrates. This will also affect the frequencies emitted by the instrument. In the picture on the left below the bridge of a double bass is the light colored piece. On the right is the bridge of a modern guitar. 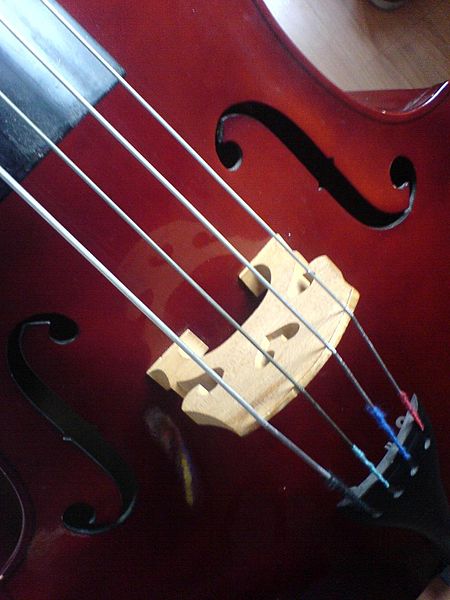 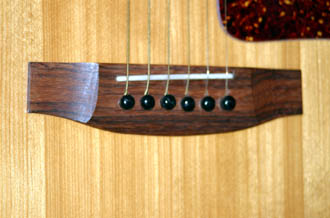 One problem that occurs for some stringed instruments, particularly the cello, is an unwanted resonance of the bridge, string, and body called a wolf tone. The result is an unpleasant, wavering note. For certain notes, energy from the string causes a resonance in the bridge and body that feeds back into the string, making the string hard to control. Beginning performers often have more trouble controlling these unwanted resonances than experienced musicians. Various design changes have been tried to avoid this problem but it is very difficult to construct an instrument with resonances only where desired and no others. 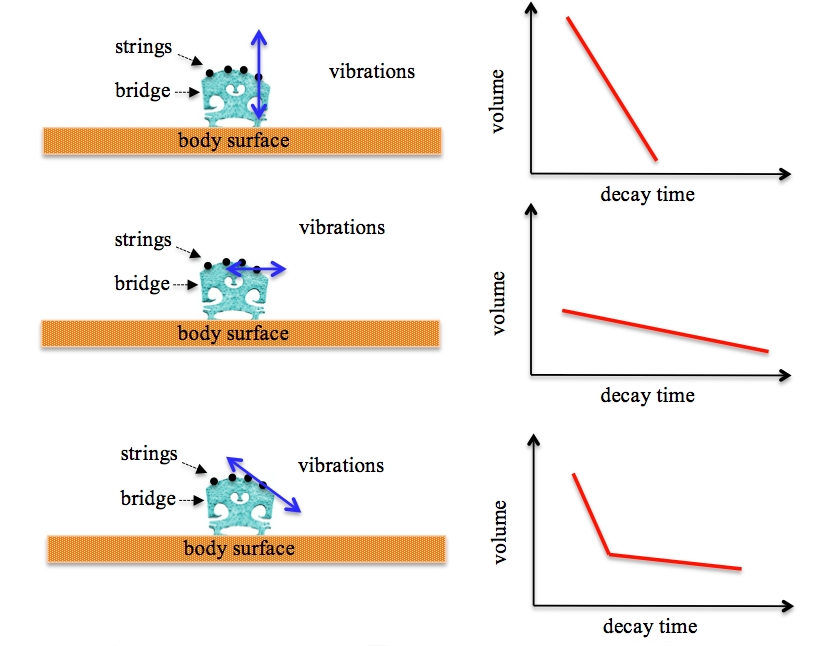 The top surface of most stringed instruments is smooth and flat but guitars, violins and other instruments have reinforcing bars on the inside, that strengthen the top and carry vibrations from the bridge area to the rest of the surface. For guitars this is called guitar bracing, for violins the reinforcing bars are called bass bars. Instrument makers generally try to construct these so that they do not cause unwanted resonances while reinforcing desired frequencies in the instrument but this is largely a trial and error process. The knowledge gained from this process has been handed down over many generations and there are at least half a dozen major bracing styles for guitars with many small variations of these. The following picture shows the bracing inside a guitar. 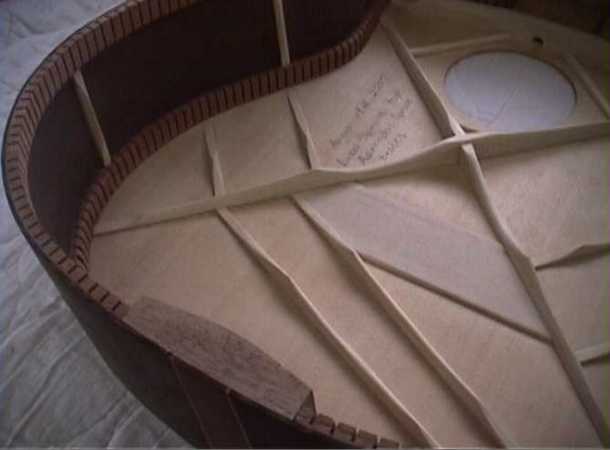 In the schematic below the cross section of a violin is shown. The bass bar runs the length of the violin and the sound post connects the top to the bottom surface. Notice that bass bar and sound post are positioned so that as the bridge rocks back and forth due to vibration of the strings the bridge will transmit energy to both the bass bar and the sound post. The asymmetric location of the sound post also means the top surface is more likely to vibrate with the left side out of phase with the right side (left side going up at the same time the right side is going down). This affects the Helmholtz resonances of the cavity inside.

Another factor that affects the sound of a string instrument is the material of which it is constructed and the finish. More expensive guitars and violins are made from wood that is picked to be very dense and have very uniform and fine grain. The more uniform the wood grain the less likely there will be an unwanted resonance. It has been claimed that the famous Stradivarius violins have a special sound in part because the wood was treated with special chemicals. The process of how they were made was a secret that was lost hundreds of years ago and has not been replicated.

Strictly speaking keyboard instruments such as the piano, harpsichord and clavichord are classified as percussion instruments because there is a mechanism that strikes or plucks the string. In the clavichord, developed in the 15th century, a small metal piece called the tangent hits the string (sometimes two strings) when a lever is pressed by the performer. The harpsichord was developed in about a century later and uses a quill (originally from the feather of a bird) called the plectrum to pluck one or two strings when the key is pressed. A spring mechanism moves the plectrum out of the way while the mechanism returns to its starting point (see Wikipeda for details).

The piano was developed in the early 1700s This instrument overcame several limitations of the earlier harpsichords and clavichords. Because it was significantly louder it was originally called the 'piano forte' (forte is Latin for loud). Below is a very simplified diagram of the mechanism of the strike action of the piano (more details can be found in this animation of a piano mechanism). When the key is pressed a series of levers acts to throw the hammer upward so that it hits the string. The back check keeps the hammer from bouncing back and striking the string twice. As long as the key is held down another set of levers keeps the damper off the string.

The clavichord, harpsichord and piano sound different in large part because the strings are set into vibration by different mechanisms. As we saw above, the initial shape of the string when it is plucked or struck determines which harmonics are more present. For the piano the harmonic that has an anti-node where the hammer strikes is dampened out because the hammer contact prevents the string from vibrating at that location, forming a temporary node. The piano also has a number of other innovations that give it a distinct sound. The mechanism of the piano allows the hammer to strike the strings at a different angle depending on how hard the key is pushed. The surface of the hammer is made of felt and different regions have slightly different stiffnesses of felt. So pushing a key harder not only causes the hammer to strike harder, it also causes a stiffer part of the hammer to strike the string, giving a louder sound and activating other harmonics.

Pianos also have multiple strings for some notes the piano plays. The treble pitches have three identical strings, the tenor range uses two strings, and the bass notes have only one string. There may be more than \(230\) strings used to produce the usual 88 notes on a piano. For treble notes all three strings are usually struck by the hammer but when the left foot petal is held down the hammer shifts so that only two strings are struck. In this case the third is activated by vibrations traveling from the other two through the frame that holds the strings. Since the strings can vibrate in different directions at the same time, transmitting energy at different rates and to different resonances in the piano body, the sound of a piano is much richer than instruments that sound only one string at a time. In the first picture below the strings are all moving up at the same time. In the second picture the third string is moving down while the other two are moving upwards. In the third picture the third string is moving in a direction perpendicular to the motion of the other two strings. Obviously there can be other combination of vibrations.

The piano also plays a larger range of notes than the harpsichord or clavichord. To archive the high notes the tension must be very high in the strings, as much as \(1000\text{ N}\) for some strings. To withstand these forces the strings in a piano are attached to a cast iron frame. For strings under this much tension even slight displacements from equilibrium (when the hammer strikes the string) cause a significant change in the tension. This means that striking the note harder changes the pitch slightly because the string is stretched more. The effect is greater on higher harmonics because a higher harmonic has more bends along the length of the string, increasing the tension even more. The result is that the overtones are no longer exactly harmonic.

A second problem for a stringed instrument that plays very low notes is that for a given string density and tension, the strings have to be unreasonably long to play the lowest notes. In order to shorten the length of string needed for low notes the strings are made more dense by wrapping them either once or twice. Even with these adjustments a grand piano is quite large. Upright pianos put the strings into layers so that more strings can be packed into a smaller space. The wires shown below are double wrapped piano wires. 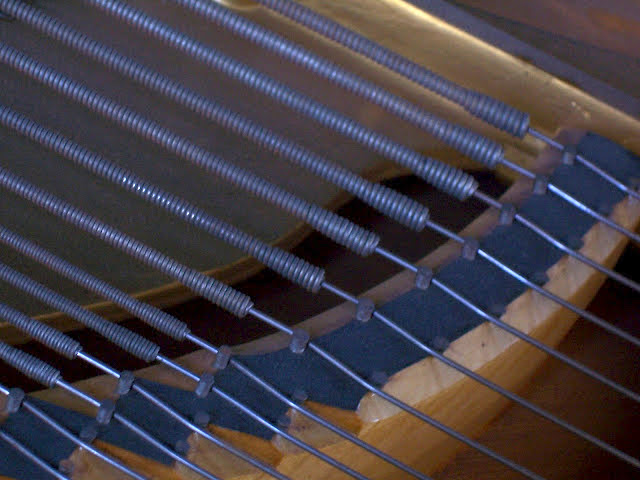 As with all stringed instruments the body of the piano acts as a resonator to amplify the sound of the vibrating strings (of course, at the cost of having the string vibrate for less time so that conservation of energy is obeyed). Pianos have a soundboard attached to the frame that holds the strings. Much like guitar bracing, the soundboard also has bracing that helps transmit the sound through the entire surface. The top of the piano serves two purposes. One is to reflect sound from the soundboard out towards the audience. The piano top also has resonant modes, just like those of a guitar or violin body that affect the frequencies being transmitted.

Strings have harmonic resonances at multiples of the fundamental frequency. The bridge of a stringed instrument transmits these harmonics to a surface that has its own resonance frequencies which are usually not harmonic. The surface can move more air than a string and so acts to amplify the sound of the string (at the expense of a shorter vibration time for the string). If the instrument has a hollow body the Helmholtz resonances of the cavity contribute to the frequencies that are present. The particular combination of string, surface and body cavity resonances give each individual instrument its timbre.