The distinct sounds that make words spoken in a particular language are called phonemes. Different languages often use distinct phonemes. We learn how to make these distinctive sounds very early in life by imitating the sounds around us. People who learn to speak a different language as adults often have an accent because they are using the phonemes they learned for their first language instead of the correct phonemes used by a native speaker. Phonemes in English can be grouped into five categories; plosives, fricatives, pure vowels, diphthongs and gliding consonants. A sixth category involving nasal sounds is sometimes included in this list.

As mentioned in the previous section, frequencies emphasized by the vocal formants play a role in each type of phoneme. In much the same way that attack frequencies for a musical instrument affect the identification of a musical sound by the ear-brain system, how the formant frequencies are initiated and terminated affect the way they are heard. For example plosive consonants are formed when the air flow through the vocal system stops completely. Examples in English would include the letters 'p', 't', and 'b'. The sounds 'g' as in 'gun' and 'k' as in 'kick' are also included as plosives. Changing the way the air stops or starts can affect the transient frequencies at the beginning and end and this changes the perceived sound. For example the sounds of the letters 'p' and 'b' have basically the same formants but different initial plosives.

Fricatives (sometimes also called sibilants) are another variation in sound in addition to the formant that has to do with the way it is produced. Examples are 'f', 'v', 'th' (as in 'thin'), 'th' (as in 'these'), 's', 'z', 'sh', and 'zh' (as in 'measure'). These sounds include frequencies that are caused by air turbulence in the mouth, in addition to the frequencies created by the vocal cords.

Most vowels are phonemes created by the action of formants on the vocal cord frequencies. For some vowels or vowel combination and for some consonants the sound changes while being made. In the case of diphthongs, two sounds are put together with a glide connecting them. Examples in English are found in the words 'eye', 'hay', 'boy', 'low', and 'cow'. A similar sort of thing happens for the gliding consonants which can further be broken down into semivowels such as 'w' and 'y' and liquids such as 'l' and 'r'. In all of these cases the formants change during the creation of the sound.

A final category of phonemes are the nasal sounds. For these phonemes the nasal cavities are used to change the vocal formants to produce sounds such as 'm', 'n' and 'ng' (as in English).

The following diagram show a picture of the recorded sound wave and corresponding spectrogram for the phrase "SAY BITE AGAIN" spoken normally. 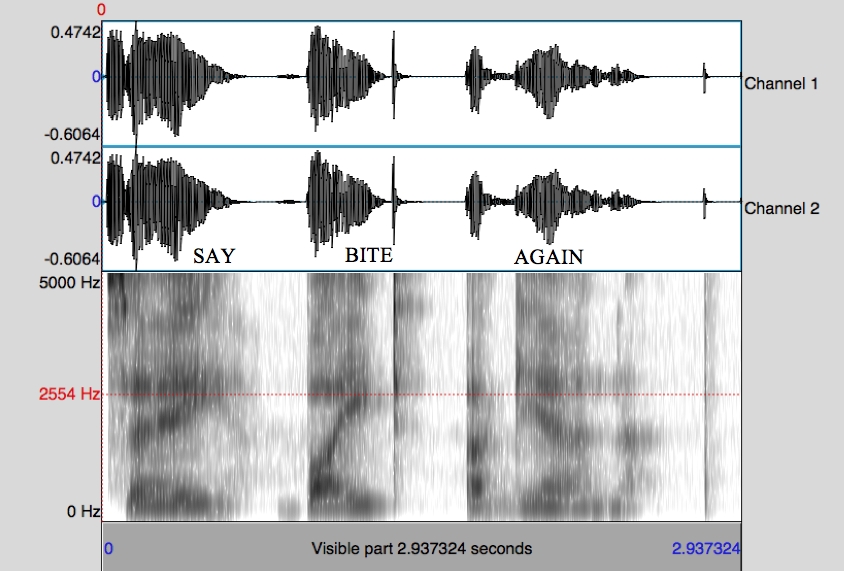 Here is a sound file of "SAY BITE AGAIN" spoken so that the phonemes are separated in time. 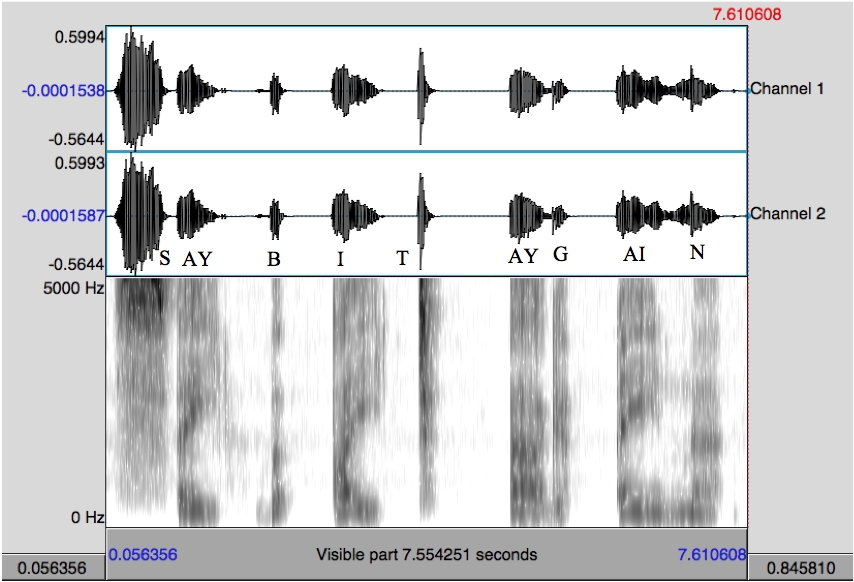