Seems simple enough; start with a note at a given frequency, apply the multiplication rules to get the other notes in the scale. So multiplying by \(2\) gives a note an octave higher, multiplying by \(3/2\) a note in between, and so forth. What could go wrong?

As music became more complicated, musicians started to want to switch keys during the piece of music. When a musician changes key they are essentially starting with a different note (say \(\text{B}\) at \(496.67\text{ Hz}\) in the Pythagorean scale) and using an octave based on that new starting point. But starting on a different note and applying the rule to generate the scale results in new notes which are not close to previous notes (it almost works in the Pythagorean scale but not in the Just temperament). If you have a musical instrument, say a piano, set up so that the notes correspond to a Just scale based on \(\text{F}\) (the key of \(\text{F}\)) for example, changing to a key of \(\text{B}\) isn't possible unless you add extra strings to the piano because there are new frequencies in the key of \(\text{B}\). The new notes also do not harmonize with the old notes. To maintain the Just scale requires a different instrument, one tuned differently for each key you want to play in (or many extra strings).

This problem gets worse when you try to generate notes an octave above or below the initial octave using the rules; the higher octave doesn't harmonize with the lower octave if they are generated using the rules. Notes an octave above should be twice the frequency of the note in the lower octave but using the formula to generate the note doesn't give a frequency twice that of the lower octave. For singing and even violins, which can make any desired frequency (within a given range), this isn't a problem because the performer can just shift the note a little so that it sounds right. But for the piano, organ, flute and stringed instruments with frets this is a big problem because the notes are determined by the construction of the instrument and cannot be changed without re-tuning it. So it appears there is a choice between making instruments so they harmonize well in one octave and scale but not another; or have different instruments for each octave and each scale; or re-tune the instrument every time you want to change scales or octaves.

A scale system that tries to correct for the problem of being able to play in any key is called a temperament. The chosen starting note of a scale is called the tonic and a musical fifth consists of the tonic and the fifth note of the scale.

Johann Sebastian Bach was the musician who managed to get the world to pay attention to alternative scales by writing music (this was in the 1700's) specifically to sound good for instruments tuned a certain way. Eventually most western cultures adopted the even-tempered scale (some other cultures did not which is why, for example, music from India often sounds very different than western music). Because the ratios between frequencies are not exactly \(3:2\) or \(5:4\) you can often hear chords where there is beating and dissonance. The chords also do not sound as pure as Pythagorean tuning because they are not exactly harmonic however the greater flexibility to change keys and to (almost) harmonize over several octaves makes equal temperament a useful compromise. Below is a diagram of the frequencies of various scale systems (temperaments).

Modern musical scales in western culture are different in one other way from older classical music. At the time of Bach the scales were based on the note \(\text{A}\) being about \(415\text{ Hz}\). In Handel's time the frequency of \(\text{A}\) was \(422.5\text{ Hz}\) and today it is \(440\text{ Hz}\). This gradual shift upward was made possible by stronger materials for pianos and guitars which could withstand the greater tension in tighter strings.

As mentioned previously, the constraints of making a piano with a wide range of notes but is not too large requires using strings that are dense and under a great deal of tension. This makes them slightly nonlinear, meaning that the overtones are not exactly harmonic. If the piano was tuned in a precise mathematical way (using any of the scale systems) these an-harmonic overtones would not sound well when two notes an octave apart are played. What is generally done is to tune the piano by ear so that it sounds correct, starting with low notes and working up to higher pitches. The result of this process is that, for a modern piano, low notes are slightly flat (lower) while high notes are slightly sharp (higher). The figure below (called a Railsback curve) shows the difference from perfect tuning of a modern piano. 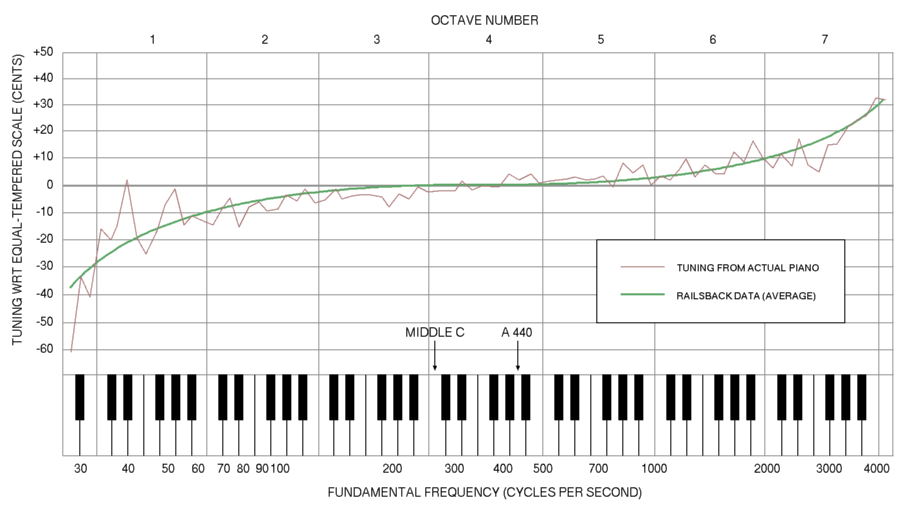