Our perception of distance and direction also strongly affects our experience in a concert hall. We determine the distance to a sound source in part by how loud it is. Part of our clues about distance also come from reverberation. If there is little or no reflected sound it is difficult to determine how far way a sound source is.

In addition to reverberation our ear-brain hearing system uses four other methods to determine the direction and distance to a sound source. The distance between your ears is about \(15\text{ cm}\), causing as much as a \(0.4\text{ millisecond}\) delay for sounds coming from one side. If a sound arrives at the left ear a little before the right ear we perceive the sound as coming from the left. This time delay gives us clues about left and right but does not help us distinguish front from back or up from down. It works best for short wavelengths of sound that have to travel around our head to reach the other ear.

Our ear/brain system is also capable of detecting phase difference in some special cases. Recall from Chapter 3 that the phase of a wave tells us when it starts relative to some arbitrary starting time. If the phase of the peaks in the sound wave arriving at the left ear is slightly ahead of the phase of the peaks arriving at the right ear our ear-brain system interprets the sound as coming from the left. Notice this is different from a time lag between ears; phase differences can be detected even for a continuous tone that does not start or stop. This ability occurs most prominently for sounds below \(1500\text{ Hz}\). The picture below shows a difference of phase between a wave going to the right ear and a wave going to the left ear. 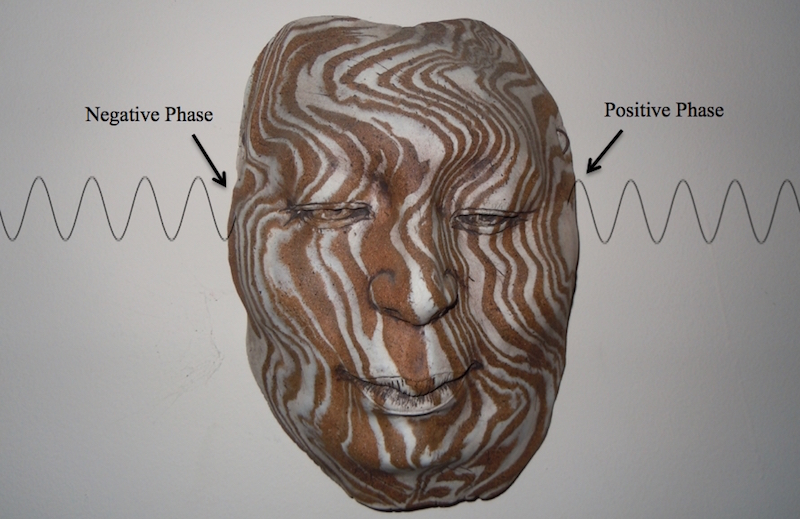 For higher frequencies we may be able to detect slight intensity differences of sounds coming from different directions. Frequencies between \(2\text{ kHz}\) and \(3\text{ kHz}\) have wavelengths that are larger than your head so they diffract (see Chapter 7) around your head, making the time delay negligible. But the intensity difference still provides a clue about direction. If the left ear perceives a louder sound we experience the sound as coming from the left.

For humans our left-right determination of sound direction is stronger than our ability to determine whether sound is coming from above or below. This has the practical result that sound from speakers in a concert hall which are too far apart in the horizontal direction do not sound right; we are not easily fooled into thinking the sound is coming from the center of the stage where the performers are. Because our up-down discrimination is not so refined we are less bothered by speakers hanging overhead. For the most part we tend to perceive the sound as coming to us from the front even when the speakers are above us.