Positive charges (protons) repel each other as do negative charges (electrons). Unlike charges (electrons and protons) attract. Most material contains equal amounts of positive and negative charge because of the strong attraction between protons and electrons. However, you can demonstrate this attractive electric force by rubbing various things like plastic and fur together. For example, the clothes in your dryer will stick together when they come out because in the process of tumbling, some electrons get rubbed off onto one piece of clothing from another. The piece of clothing that loses electrons has too few electrons and is positive. The article of clothing that picked up the electrons is now negative. So the two pieces stick together. These are electrical forces and have nothing to do with magnetism.

An aurora (for example the aurora borealis (norhtern polar lights) or the aurora australis (southern polar lights)) is an interesting example of the force on moving charges. Positive charged particles come streaming in from outer space but may interact with the earth's magnetic field if they are moving in the right direction. At the equator they cut across the magnetic field of the earth and so are deflected into orbiting bands of particles called the Van Allen radiation belts. At the poles the charges are moving parallel to the field and so are not deflected. When they hit the upper atmosphere they give off energy in the form of light as they collide with air molecules and slow down. It is this light that forms the auroras borealis and australis. 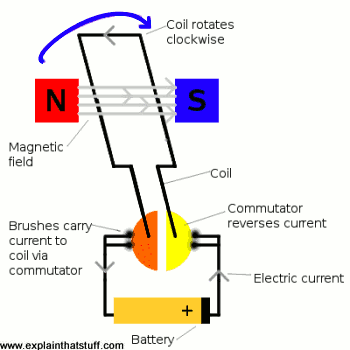 In the picture on the left, above, current flows from the battery at the bottom up the right side of the coil (black wire; real motors have hundreds of turns but the drawing only shows one for clarity). As the current passes the south end of the magnet (blue) it feels a downward force. The current continues across the top of the coil and comes downward past the north end of the magnet (red) where it feels an upward force. The current then returns to the battery. The upward force on the left half of the coil and the downward force on the right half of the coil cause the coil to rotate \(180\text{ degrees}\). What keeps it going on around? Once the left side has flipped around to the right (and the right side to the left) notice that the current will still be going up on the right and down on the left. The commutator has reversed the current flow. So the coil continues to rotate in the same direction (blue arrow). See if you can follow the sequence in the animation on the right.