A loudspeaker takes an electronic signal and turns it back into sound. How does a speaker reproduce sound from an electrical signal? We know from the previous chapter that the current flow in a coil of wire will produce a magnetic field. This electromagnet will attract or repel other magnets as if it were an ordinary magnet. One difference, however, is that we can easily reverse the polarity of the electromagnet by changing the direction of current flow. An oscillating current in the coil will result in an oscillating force if the coil is near a permanent magnet. This is the basis of a dynamic speaker. A coil surrounded by a permanent magnet is attached to a cone made of cardboard, plastic or other flexible material. When an oscillating electrical signal flows through the coil there is an oscillating force on the coil and cone. This makes the cone vibrate back and forth, producing sound waves in the air next to the cone.

Dynamic speakers have two basic designs depending on the range of sound frequencies being reproduced. Bass speakers or woofers have large, flat cones attached to the coil and are designed to produce low frequencies. A sketch and cutaway picture are shown below. The voice coil is attached to the cone or diaphragm. Electrical signals enter from the leads and go through thin wires which are glued to the spider, a lightweight flexible support system for the coil. Oscillating current in the voice coil causes an alternating magnetic force between the coil and the permanent magnet. This alternating force on the coil is transmitted to the cone which causes air to vibrate, creating sound.

Tweeters are designed similarly to bass speakers but have a small (2 cm to 5 cm), dome shaped vibrating part in place of the cone. Because they are smaller and lighter they are better able to produce higher frequencies. In both types of speakers the permanent magnet does not move. This is because magnets are heavy; if the permanent magnet was attached to the cone instead of the coil, the extra inertia would keep the cone from responding to fast variations in the signal.

It is also possible to make an electrostatic speaker that uses electrical forces, rather than magnetic forces. For this type of speaker, a thin sheet of flexible plastic (a diaphragm) with a metallic coating is suspended between two thin metal screens or grids. There is a small air gap between the grids and the plastic sheet. The sheet is charged by an external source and the oscillating signal is sent to the grids. The oscillating voltage between the grids causes the diaphragm to vibrate, producing sound. This is exactly the opposite process that occurs in an electrostatic microphone, described previously. An advantage of the electrostatic speaker is that it is very light and so responds very well to high frequencies. Another advantage is that, unlike a magnetic speaker where the sound comes from a small area, the area of the diaphragm can be quite large. The large area constitutes a less localized sound source making the sound seem more natural.

The idea of a speaker system is to try to trick the ear-brain system into perceiving the sound as if it were the original performance. Because we have an ear-brain system that incorporates sound from two ears, most sound recording and reproduction is in stereo which means two separate sound tracks are used. Sound is recorded from two or more microphones and mixed into two tracks which have slightly different sound. When the final recording is played back these tracks are fed to two separate speakers with the listener sitting somewhere between them. One potential problem with a two speaker system is phase. If the speakers are wired incorrectly, the left speaker can be out of phase with the right speaker causing destructive interference between the two sound sources. Some stereo systems have jacks for the speaker cables so that it isn't possible to connect them incorrectly. But if you are using free wires to connect your speakers you should connect them one way, listen to the sound, then reverse the leads to one of the speaker cabinets and listen again. The correctly wired case will sound louder, particularly for lower notes.

It is difficult to make a single speaker that can reproduce all frequencies equally well. To overcome this limitation bass and tweeters are often combined. The most common design is to have a pair of speaker boxes with one bass and one tweeter in each box. This requires a crossover circuit that separates the incoming signal into high frequencies (which go to the tweeter) and low frequencies (which go to the bass). Other designs have a third speaker to handle mid-range frequencies and a three-way crossover. Because low frequency sound has very large wavelengths it is difficult for the ear-brain system to accurately identify where the source is located. Modern speaker arrangements exploit this fact by having a single bass speaker (called a woofer or subwoofer) but a set of two mid-range tweeters to maintain the stereo effect. Modern speaker systems also often add two more speakers that are placed behind the listener to provide artificial reverberation. As we discussed in Chapter 17, our experience of sound direction depends to some degree on reverberation so that adding speakers behind the listener with a slight delay adds depth to the perception of sound from a stereo system.

Free-standing speakers do not sound very good, particularly for lower frequencies. When the speaker cone moves forward to produce a compression, the back side of the cone produces a rarefaction (a low pressure region). As the speaker vibrates compressions and rarefactions on the front side are exactly out of phase with the rarefactions and compressions coming from the back of the speaker. When sound from the back combines with sound from the front, the waves are out of phase and tend to cancel due to destructive interference as seen in the first figure on the left, below. This is very similar to the problem of the drum body that we saw in the previous chapter. The effect is more noticeable for lower frequencies which have longer wavelengths. This is especially a problem for the electrostatic speaker which typically does not have an enclosure and so does not produce low frequencies well. 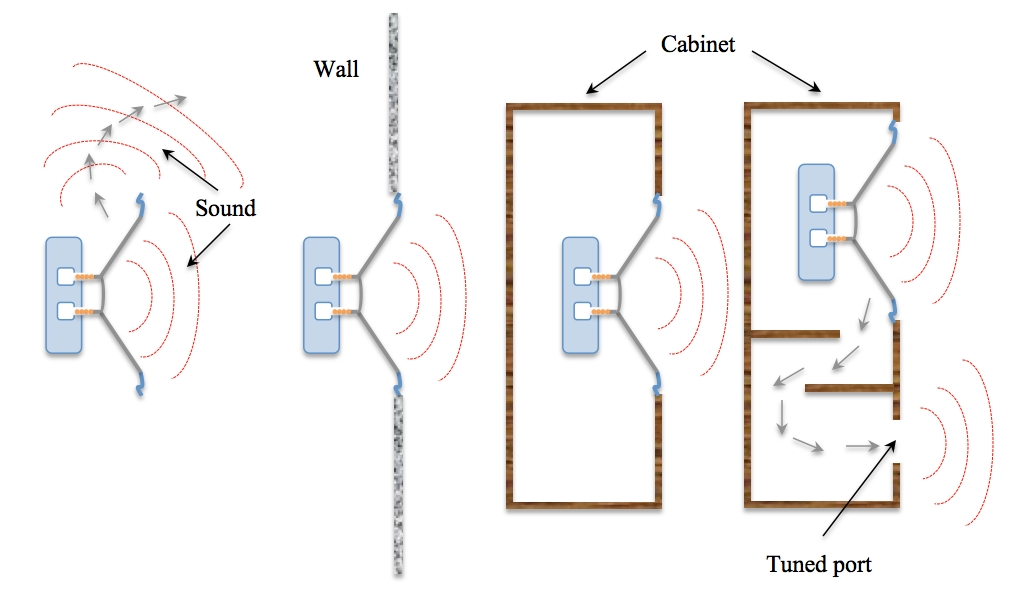 There are several potential solutions to the problem of destructive interference between the back and front of the speaker. If the speaker is mounted in a wall or ceiling the sound from the back is trapped and cannot cancel sound from the front. This arrangement is called an infinite baffle and is shown in the second figure above. A second solution is to put the speaker in a box or speaker cabinet which has sound absorbing material inside so that the wave from the back is again trapped. This is shown in the third figure above. A third solution is to cause the sound from the back of the speaker to travel an extra half wavelength before it recombines with waves from the front. This is done by making a hole in the front of the speaker cabinet (sometimes called a bass reflex port or bass port or tuning port) and putting barriers inside the cabinet so that the sound has to travel an extra distance in order to exit as shown in the figure on the right, above. Obviously this extra distance can't be exactly half a wavelength for all the different wavelengths being produced but it can be arranged to emphasize a frequency range, typically lower notes where the destructive interference of a free standing speaker is more noticeable.

Another way of explaining how a bass port works is to think of the bass port as an opening to an enclosed volume of air. As we saw in Chapters 4 and 16, the opening will make a Helmholtz resonance frequency possible which depends on the size of the speaker cabinet. Choosing the right sized cabinet will reinforce certain low frequency notes in the music, giving a better bass response.