We start by creating a diagram for the first object of interest. In Figure \(\PageIndex{2a}\), object A is isolated (circled) and represented by a dot. 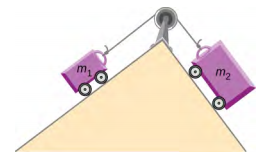