To describe locations of points or vectors in a plane, we need two orthogonal directions. In the Cartesian coordinate system these directions are given by unit vectors \(\hat{i}\) and \(\hat{j}\) along the x-axis and the y-axis, respectively. The Cartesian coordinate system is very convenient to use in describing displacements and velocities of objects and the forces acting on them. However, it becomes cumbersome when we need to describe the rotation of objects. When describing rotation, we usually work in the polar coordinate system. 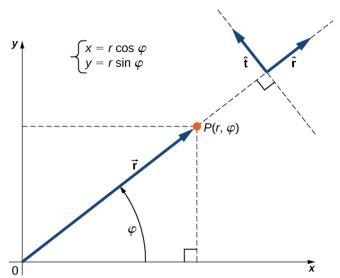 For the silver coin, the coordinates are 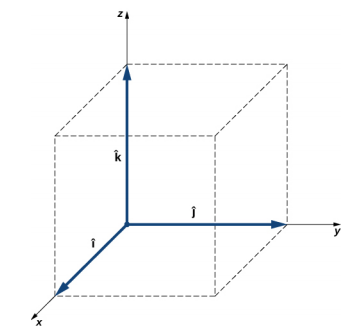 If we know the coordinates of its origin b(xb, yb, zb) and of its end e(xe ye, ze), its scalar components are obtained by taking their differences: Ax and Ay are given by Equation 2.13 and the z-component is given by

Magnitude A is obtained by generalizing Equation 2.15 to three dimensions:

This expression for the vector magnitude comes from applying the Pythagorean theorem twice. As seen in Figure 2.22, the diagonal in the xy-plane has length \(\sqrt{A_{x}^{2} + A_{y}^{2}}\) and its square adds to the square Az2 to give A2. Note that when the z-component is zero, the vector lies entirely in the xy-plane and its description is reduced to two dimensions. 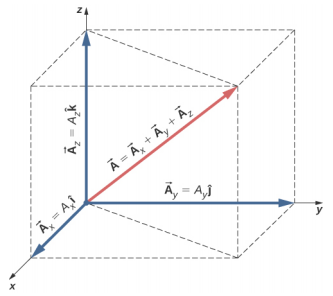 Figure \(\PageIndex{7}\): A vector in three-dimensional space is the vector sum of its three vector components.

Takeoff of a Drone We substitute these components into Equation 2.19 to find the displacement vector:

We substitute into Equation 2.21 to find the magnitude of the displacement: