Dynamic Force Spectroscopy (DFS) is a method used to measure binding properties of biomolecules. The main idea behind DFS is to measure the force it takes to manipulate (ie stretching, twisting, pushing, etc) a biomolecule or biomolecular complex. The term 'spectroscopy' refers to the interaction of matter and radiation. However, dynamic force spectroscopy doesn't use light and matter interactions directly so the term can be misleading.

The three most common apparatuses used for DFS are the atomic force microscope (AFM), optical tweezers, and a biomembrane force probe. Details of each of these tools are outlined below. In theory, each of these probes acts as spring with a spring constant K, where measured displacements can easily be converted to forces (Hooke’s Law).

Each of these techniques allows forces to be measured on the pico-Newton (pN) scale, which is small enough to measure the breaking of a single hydrogen bond. Therefore, it logically follows that the probes used in DFS methods are also very sensitive to interactions with the surface of interest. For example, when an AFM tip approaches a sample, electrostatic forces begin acting on the tip when the separation distance is still a few microns. As the tip comes within nanometers of the sample, Van der Waals forces, capillary forces, chemical potential, solvation forces, and even magnetic forces become prominent. These weak forces eventually sum to an attractive force that causes the tip to contact the sample. The adhesive strength between the probe and the sample is what is ultimately measured when the probe is pulled away from the sample, also known as the rupture force. The rupture force is the force required to break apart the interaction being investigated, in the units of Newtons. Depending on the sample of interest, non-specific binding, ligand-receptor binding, DNA hybridization, and cell surface interactions can cause strong adhesion. Even as the tip is being pulled away from the sample, protein unfolding, entropic elasticity, or other conformational changes allow the tip and the sample to continue interacting until the connection is completely broken.

AFM was originally designed for high-resolution imaging of surfaces, but now is also well known by scientists as the most common method for dynamic force spectroscopy. The AFM cantilever is usually made out silicon or silicon nitride. The canitilever is about 200 microns long, and the very tip (the probe in DFS) has a radius of usually 5-50 microns. Below is an example of the experimental setup for the AFM. Forces as low as 10pN have been measured by use of an AFM. Forces below this amount are nearly impossible to measure with this technique for reasons such as thermal noise and hysteresis of the piezoelectric material.

Figure 1: Atomic Force Microscope Experimental Design. Block diagram of atomic-force microscope using beam deflection detection. As the cantilever is displaced via its interaction with the surface, so too will the reflection of the laser beam be displaced on the surface of the photodiode. Image used with permission (Public Domain).

In DFS experiments the tip is moved towards the sample until adhesion occurs, and then retracted until the surfaces loose contact. A piezoelectric controller moves the cantilever, but a laser reflecting off of the cantilever onto a photodectecor measures the actual displacement of the tip. The displacement of the cantilever is directionally proportional to the interaction force, according to Hooke’s law (F=Kx). The spring constant K, is different for each AFM tip so this value must be calibrated before beginning AFM experiments. Measurements are repeated hundreds of times in order to generate a distribution of rupture force as a function of the logarithm of the loading rate. Loading rate corresponds the velocity at which force is applied to the molecule of interest.

The speed at which the tip is pulled away from the sample, how long the tip is in contact with the sample, and how much time lapses before the tip re-contacts the surface all impact the measured rupture force. This allows for much flexibility in experimental design. Altering such variables can provide information on the viscoelastic properties of the sample, adsorption rates for binding, and even re-folding rates of proteins. Beads coated with a molecule of interest can also be attached to the cantilever to study biomolecular interactions such as ligand/receptor binding forces.

Optical Tweezers, also known as an optical force trap, is a strongly focused laser beam that can trap and move particles of dielectric material. Beads on the scale of nanometers to micrometers are often used in biophysical experiments with optical tweezers. The trap works by using the principles underlying simple fundamental laws of Physics. We know that light exerts force on matter (Maxwell’s Laws and Lorentz force) and thus carries linear momentum quantified as plank’s constant multiplied by the wave number, \(\rho = \hbar K\). Since momentum is always conserved, an object that changes the momentum of the light also experiences an equal and opposite change in momentum. A balance between the scattering forces (reflected light) and refracting forces holds an object in the center of beam, just downstream of the laser focus. An illustration of these principles is provided below. See laws of reflection and refraction for more detail. If the bead is displaced from the center of the trap, the scattering force becomes stronger from the direction of the displacement and therefore returning the object to the center of the beam. This restoring force of the trap works much like an optical spring. The farther from center an object gets, the stronger the restoring force.

Figure 2: Ray optics explanation (unfocused laser). When the bead is displaced from the beam center (right image), the larger momentum change of the more intense rays cause a net force to be applied back toward the center of the laser. When the bead is laterally centered on the beam (left image), the resulting lateral force is zero. But an unfocused laser still causes a force pointing away from the laser. image used with permission (CC-BY R.koebler).

Optical tweezers are used in many biological applications to manipulate objects and measure forces on the pN scale. By attaching single molecules to a bead, the forces acting on the molecules under various conditions can be measured and used to model their physical behavior. For example, optical tweezers have been used to study molecular motors such as kinesin, myosin, or RNA polymerase. The proteins are fixed to a glass bead at a fixed position and operate on a molecule (for example, an RNA strand) attached to bead trapped in the optical tweezers. As the motor functions, the bead becomes displaced from the center of the trap and the force required to move the molecule can be determined from this displacement. Such experiments provide insight into not only the forces produced by these various molecular motors, but also into the advance kinetics of how they function. Examples of other types of experimental setups using optical tweezers in provided below. Note that multiple optical traps can be used in the same experiment. 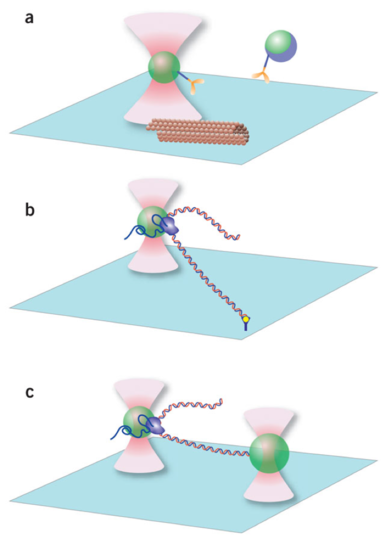 The physical and thermodynamic properties of DNA have also been widely studied by optical tweezers experiments. Single strands of DNA can be attached to a bead and manipulated in the optical trap. Scientists have measured the elasticity of DNA and the forces required to break DNA apart. Additionally, DNA-protein interactions and the kinetics of DNA binding proteins can be studied as well.

Optical traps are used to measure forces of molecules. As stated early, position is directly proportional to force (Hooke’s Law). After the trapping beam passes through the sample, it is directed to a quadrant photo diode (QPD) position detector. If the bead moves off center from the beam, then the illumination pattern on the QPD position detector also changes. The QPD position detector measures an arbitrarily scaled voltage that must be calibrated to the specific experimental set up. The calibrated voltage outputs from the QPD directly correspond to the distance the bead has moved from the trap center and therefore force. 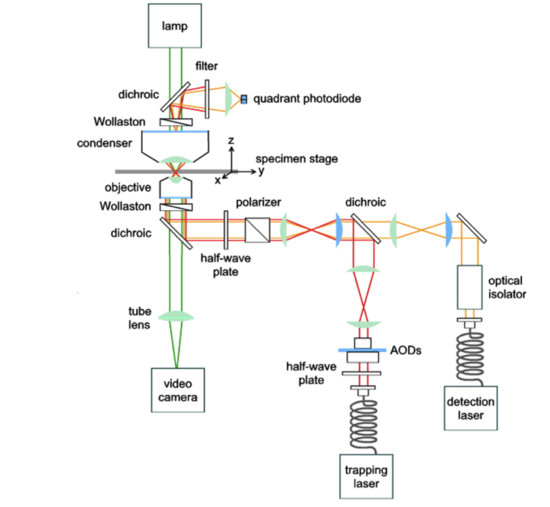 The biomembrane force probe is a technique that measures axial displacement of a streptavidin-coated bead attached to the pole of a micropipette pressurized red blood cell. The amount of suction on the red blood cell determines the membrane tension, which can be modeled once again as a spring. That is the elastic stiffness of the transducer, K, is proportional to membrane tension. Because the tension can be adjusted by changing the hydrostatic pressure in the micropipette, this technique allows for the measurement of a very large range of forces. An illustration of this technique is provided below. A streptavidin-coated bead is covered with ligands of interest and the red blood cell it is attached to simply act as a force transducer. The streptavidin-coated bead interacts with the complementary receptors, biotin, on the surface of a target such as a living cell, another bead, or a vesicle attached to another micropipette. As the two pipettes are pulled away from each other, the force of the ligand-receptor interactions can be measured.

As with AFM techniques, the rupture force measured using a biomembrane force probe depends on many variables. The study of how the interaction changes will pulling speed, v, and how long the two surfaces are allowed to interact allows scientist to from a dynamic force spectrum of the bond. Rupture force distributions of a bond at different loading rates are used to determine the dynamic force spectra of the interaction. The slopes obtained in the dynamic force spectra correspond to a given barrier (\(\Delta E\)) in the energy landscape of the bond. The energy landscape refers to the energy barriers of the system to go from a bound to unbound state.