Single Molecule Tracking (SMT), also known as Single Particle Tracking (SPT) or Single Dye Tracking (SDT), refers to a class of non-invasive techniques that involve direct spatial observation of individual molecular or particle entities as a function of time. Though precise experimental methods may vary depending on the demands of different applications, SMT generally relies upon high resolution imaging of a nanoscopic reporter (i.e. probe) that is stably attached to a biomolecule of interest. Unlike ensemble techniques such as fluorescence recovery after photobleaching (FRAP), SMT can be used to probe nanoscale heterogeneities and dynamic processes that may otherwise be obscured in data that has been averaged across numerous measurements from many molecules over time. Biophysical applications for SMT have expanded extensively since the development of organic dye reporters in the early to mid-1990’s, as well as in response to the continual advancement of super-resolution imaging systems. Due to its high resolution and real-time observational capabilities, SMT has proven especially valuable for observing the spatiotemporal dynamics of biological processes both in vitro and in vivo [1-3].

During SMT experiments, reporters (i.e. labels) are used to observe molecules of interest. Per terminology coined by Clausen and Lagerholm [1], reporters are generally each comprised of two parts: a ‘specificity’ module that can reliably target the biomolecule of interest, and a ‘label’ module that allows for direct visualization (see Figure 1). Except in cases of autofluorescent molecules, reporters are often attached using biochemical means (e.g. bioconjugation of labeled antibodies). To ensure high specificity and to reduce the likelihood of reporters influencing the behavior of a targeted biomolecule, a 1:1 reporter-biomolecule binding ratio is commonly treated as ideal. Reporter size must also be taken into consideration; while small reporters are less likely to influence native biomolecule properties and behaviors, large particles tend to produce higher signal-to-noise ratios during observation. Bearing in mind that the type of reporter used can have a significant impact on the limiting resolution and overall accuracy of a SMT experiment, it is extremely important that appropriate probes are chosen to meet the demands of the study being conducted. The following three subsections contain information on customary types of reporters used in SMT [1, 2]. 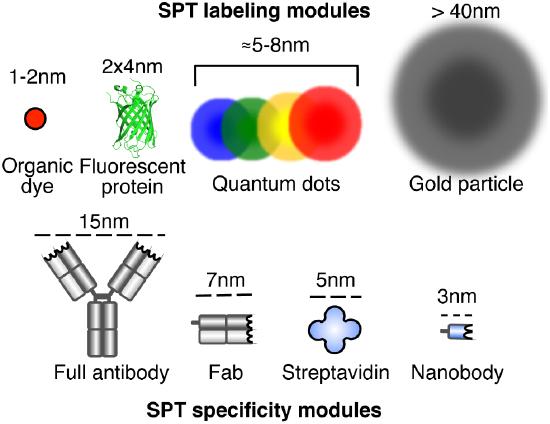 Non-fluorescent particles such as gilded nanoparticles and polystyrene beads were among the earliest developed probes for SMT. The spatial coordinates of gold or gold-covered nanoparticles with diameter sizes no smaller than 40 nm can be readily determined with nanometer precision using enhanced differential interference contrast microscopy (DICM). Benefits of non-fluorescent reporters include, high photostability, temporal resolution, and optical performance, but at the cost of limited mobility. For smaller gold particles (less than 40 nm in diameter), complex visualization methods such as photothermal heterodyne imaging, which takes advantage of the effect of heated particles on the refractive index of its local environment, have been shown to locate reporters within a positional accuracy of 20 nm and a tracking rate of 30 Hz in living cells [1, 3].

Organic fluorescent dyes are extremely versatile in that they can be easily conjugated with high specificity to a variety of biomolecules such as lipids, proteins, and DNA. With effective diameter sizes that range between 1 – 2 nm, organic fluorescent dyes are advantageous because they are less likely to perturb the functionality of the molecules being studied. Moreover, they are amenable to multi-color SMT, a variation of SMT where multiple dyes are simultaneously visualized by use of optical filters that separate emission spectra, and can be used to signal multi-particle interactions using techniques such as Förster Resonance Energy Transfer (FRET). The major disadvantages of using organic fluorescent dyes are poor photostability and small absorption cross-sections. Together, these factors affect SMT experiments by restricting image collection times to only a few seconds before photobleaching and result in poorer localization precision. Overall, ideal fluorophores are relatively small in size, exhibit robust photostability, have high extinction coefficient values and quantum yields, emit signals with little intensity fluctuation in the timescale of the events being observed, are excitable by light with wavelengths within the visible range of the electromagnetic spectrum, and can be stably conjugated to the biomolecule of interest.

Quantum dots (QDs) are semiconductor nanocrystals with size-dependent emission wavelengths that result from quantum confinement effects. With inorganic cores ranging from 4 – 10 nm in diameter, QDs can be rendered biocompatible using surface-functionalization techniques that extend the diameter of the particles to sizes up to 10 – 30 nm. When compared to non-fluorescent and fluorescent labels, QDs offer a model compromise between having particles small enough so as not to markedly affect the biomolecule of interest, yet still exhibiting the superior optical properties required for high resolution localization and tracking. Namely, QDs have been found to emit two to three orders of magnitude more photons before photodissociation, in addition to exhibiting extinction coefficient values up to ten times larger than organic dye counterparts. The most challenging aspect of using QDs tends to be controlling the number of biomolecules attached to a single reporter at any time, although new strategies for reducing QD size and synthesis of monovalent particles are continually being developed. QDs can also be technically challenging to deliver into the cytoplasmic domains of living cells and tend to produce blinking emission signals. Like conventional fluorescent dyes, they can be used for multi-color SMT [1, 5].

The conventional output of a SMT experiment is a time series of hundreds of thousands of digitized images where the reporter is detected as a visible diffraction pattern that is the convolution of the particle shape with the point spread function (PSF) of the optical system. Fitting and deconvolution of this function allows for particle localization with sub-pixel resolution, often with the center of the reporter particle taken as coincident with the centroid of the PSF. For diffraction patterns that appear as concentric rings, the intensity profile of the central ring (i.e. Airy disk) can be fit to a 2D spatial Gaussian described by Eqn. 1:

Where I0 is the intensity at the center of the disk and w is the PSF. The full-width-at-half-maximum (FWHM) of the function ultimately determines the positional accuracy of a measurement and can be related to the wavelength of the excitation light, λ, as well as the numerical aperture of the microscope objective, NA, as described in Eqn. 2:

The diffraction limit of light prevents resolution of two particles separated by a distance less than the FWHM, which tends to be approximately 250 nm for visible light at a NA of 1.3 [1]. When particles are separated by a distance longer than the FWHM, the objects are detected as discrete, visible diffraction patterns that can individually be described usin ﻿﻿g the equations provided above. Consequently, it is necessary for reporters to be present in very dilute concentrations when performing SMT and only a small number of biomolecules can be investigated at any given time [1]. Even though resulting diffraction patterns are popularly fitted to a Gaussian distribution during analysis, a number of algorithms exist to provide more accurate approximations specific reporters and experimental set-ups [6].

Once a reporter has been localized in each snapshot, its position can be traced across multiple frames to estimate the spatial trajectory of the particle as it was observed over time (see Figure 2). The mean square displacement (MSD) is frequently measured with respect to time lag to inform diffusion studies whereas trajectory steps can be further analyzed to distinguish the type(s) of motion observed (e.g. anomalous diffusion, confined motion, directed motion). This process of localization and reconstruction is arduous when performed manually or with heavy user involvement, so several computer algorithms have been developed over recent years to facilitate accurate localization and unbiased tracking of particles during SMT data analysis [1]. Figure 2: SMT performed by Dahmane, Rubinstein and Milhiet [7]. A red fluorescent antibody label was attached to a protein and localized with sub-pixel resolution by analyzing the diffraction-limited image of the emission, for which the corresponding intensity distribution was approximated as a 2D Gaussian function with a position precision (FWHM), σ. Trajectory was tracked by marking the displacement of the protein between frames in chronological order (frames taken at 3 and 21 seconds shown here). During analysis, measurements of the MSD over time were compared to trends associated with known types of diffusion to classify the mode of motion. The green emission corresponds to another labeled protein (tracking not shown here).

Images for SMT are acquired using highly sensitive, low-noise cameras. Acquisition rates can range between 10 – 40000 Hz, depending on experimental conditions and restrictions imposed by the type of reporter being observed [1]. SMT can be performed using a variety of experimental configurations. Examples of widely used types of SMT are described in the following three sections:

Two-dimensional (2D) SMT is common for probing samples that are fixed to a planar surface or compartmentalized within the plasma membrane of a cell. For these studies, wide-field illumination is preferred to enable parallel detection of multiple reporters and, in effect, rapid data acquisition. Total Internal Reflection Fluorescence (TIRF) microscopy (see Figure 3) , which illuminates samples using an evanescent wave generated by focusing a laser beam on the back focal plane of an object, has been found to provide excellent signal-to-noise ratios when used to excite reporter molecules in close proximity to the excitation plane. TIRF microscopy is highly suitable for cell membrane studies as the basal membrane is often in contact with the underlying glass surface, but less applicable when targeting reporters located in the bulk cytoplasmic region of a cells. For visualizing interior reporters, other advanced illumination methods such as Highly Inclined and Laminated Optical (HILO) Sheet Illumination and Light Sheet Fluorescence Microscopy (LSFM) have been demonstrated as effective methods [1].

Figure 3: TIRF schematic diagram. An evanescent wave is used to excite fluorophores located in the region of the cell membrane in contact with the supporting glass slide [6].

Early forms of three-dimensional (3D) SMT utilized confocal microscopy to record a series of confocal image stacks along the axis normal to the basal plane of a sample, but were limited to very slow dynamic processes using this method. For tracking faster phenomena, alternative methods such as two-photon excitation – a method that relies upon an orbital scanning scheme combined with a feedback loop to locate particles in 3D – have been developed. The most straightforward approach monitors changes in the PSF during wide-field illumination, which undergoes subtle shifts when displacing in the z-direction (i.e. above and below the focal plane). Other approaches, not unlike in the case of 2D SMT, rely on complex illumination methods such as LSFM [1].

Multi-Color SMT can be performed to simultaneously observe co-localized fluorescent reporters by using appropriate filters to distinguish particles by their characteristic emission spectra. Filters are often coupled with additional measures such as alternating excitation lasers to reduce cross-talk between fluorescent signals. Given their narrow emission spectra, QDs are usually ideal for these applications. High-speed Hyperspectral Microscopy (HSM) – a technique that uses a scanning single laser to excite a diffraction-limited volume of a sample at a given time – has been shown capable of performing SMT with up to eight species of QDs. However due to technical limitations of standard fluorescence microscopy set-ups, only up to three kinds of reporters are routinely observed over the course of a single experiment [1, 4].

With its unique capacity to observe dynamic biological interactions and behaviors with high spatiotemporal resolution, SMT has emerged as an invaluable tool for investigating a multitude of biological and biophysical phenomena. Early studies focused on elucidating descriptions of nonergodic transport and biomolecular motility, but applications have since expanded to encompass a wide range of topics. Processes that have been studied using SMT include, but are not limited to the following: