In this introductory model of the particle nature of matter we focus primarily on the force that acts between two atoms or molecules. We make extensive use of the relation of force to the potential energy describing the interaction between two atomic sized particles. Initially we assume the particles are electrically neutral, but we will see how to take this into account a little later in the chapter. The next two models will use the basic ideas established here to help us develop a much deeper understanding of both bond energy and thermal energy.

The particle model of matter that we introduce is the familiar picture of matter as composed of atoms and molecules. Our particle model for ordinary matter is simple and universal. It is not restricted to a particular kind of matter, but encompasses all ordinary matter. That is what makes this model so useful. Of course, being very general, it can’t predict many of the details that depend on the “particulars”, but it can predict many of the universal properties. 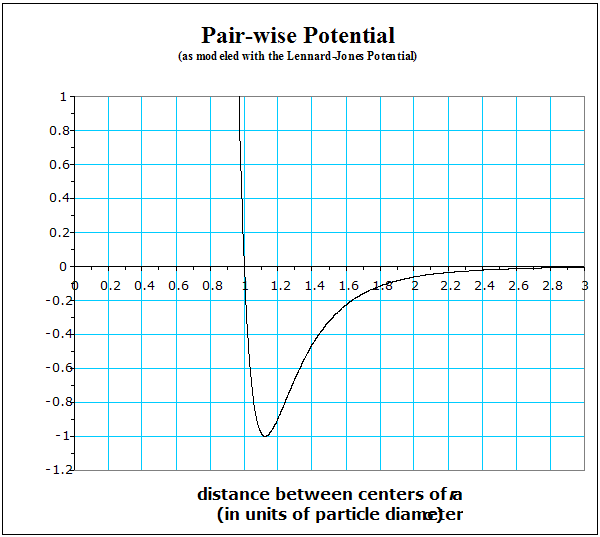 The PEpair-wise PE curve shown has the typical shape of almost all atomic-size pair-wise potentials. It has a simple mathematical form, so is useful for that reason alone. This particular shape describes rather well the interaction between the atoms of the noble elements (He, Ne, etc) in all their phases. Note that the equilibrium separation occurs at a slightly larger separation distance than one particle diameter, designated by the lower-case Greek sigma, s. If these particles acted like billiard balls, there would be a little space between them, even when they were as close as they “wanted” to get to each other.

It is customary, much to many beginners’ consternation, to define the zero of PEpair‑wise to be the value the PE has when the particles are separated by a great difference. Also notice how steep the curve gets as the particles begin to get closer than the equilibrium separation. Remember, a steep PE curve means a strong force, which is repulsive in this case. We will frequently return to this graph.

Meaning of the Model Relationships

1) All “normal” matter is comprised of tiny particles (atoms and molecules) that move around in perpetual motion, attracting each other when they are a little distance apart, but repelling upon being squeezed into one another.

This is a slightly paraphrased quote from Nobel Laureate Richard Feynman in which he stated that if all scientific information were to be lost, these would be the most valuable ideas to pass on to future generations.

2) The part about the particles attracting and repelling each other is most easily visualized in terms of the slope of the pair-wise potential energy acting between the two particles. Be sure you review the previous chapter if you need to so that the relationship between force and PE ( |F| = |d(PE)/dr| ) is absolutely clear to you. There is no point in going any further, if you are still stumbling over this relationship.

4) When there are many particles, the phase (s, l, g) of those particles depends on their total energy. At sufficiently high total energy, the particles are unbound and in the gas phase. At sufficiently low energy the particles are in the liquid or solid phase and are bound. The average particle-particle separation in the bound state is approximately equal to the separation corresponding to the minimum of the pair-wise potential energy. In the unbound state it is much greater than the separation corresponding to the minimum PE.

One common mistake that many students make is to attempt to ascribe macroscopic properties (like solid, liquid, gas) to the interaction of only a small number of particles using PEpair-wise. The macrostate of matter, whether it is in a solid, liquid or gas phase, for example, is due to the simultaneous interactions of something like 1025 pair-wise interactions if we have a mole of the substance. These ideas are not easy, so be patient. Initially, try to imagine a solid at very low temperatures. Each particle “wants” to be at the right distance with respect to all of its neighbors. If there is a way for the system to “get rid” of its energy (by giving it to some colder system, for example), it will continue to settle down and reduce its thermal energy. Eventually, all the random motion comes to a stop (if we can keep cooling the sample) and the particles find their “magic” places, each near the “bottom” of the PEpair-wise with each of each neighbors.

Now, imagine we start adding energy to the sample. All the particles begin acting like little spring-masses, oscillating back and forth around their equilibrium positions. Eventually they move sufficiently far, so that some “jump” out of where they are “supposed to be.” Particles at or near the surface might even leave the sample if their vibrations get vigorous enough. Picturing what happens when a substance melts, i.e., turns from a solid to a liquid, is difficult, even for the experts. Don’t worry about picturing that transition. But you can imagine continuing to add energy until all the particles, even 1023 particles, have sufficient energy to separate far apart from each other, causing them to be in the gas phase. Recall what value all ~1025 pair-wise potentials will have, if all particles are separated by many particle diameters. So, what is the bottom line here at this point in our making sense of all this? Without getting into a lot of detail, it should make sense to you that at some sufficiently low temperature, everything will be a solid and at some sufficiently high temperature, everything should be a gas. That is plenty for right now.

6) Each particle in a solid or liquid oscillates in three dimensions about its equilibrium position as determined by its single-particle potential.

OK, so here is where we are attempting to make our mental picture a little clearer regarding what is happening to a single particle (which could be an atom or a tightly bound-together molecule) when it finds itself somewhere in the middle of similar particles in a solid or liquid. It really is acting like it is attached to a bunch of springs with all of its neighbors (and nearby neighbors). But here is the “really neat” thing. No matter how complicated the actual chemical bonds are, and no matter how many there are, or in what directions they point, they all add up to exactly what would happen if you had only three (that’s right, only three) little springs of exactly the right strength, one going out in each of the three x, y, and z directions of the three-dimensional space we seem to occupy in this universe (at least on our scale and on the scale of atoms and molecules). So the picture you want to get into your head is something like that shown below, remembering that the spring constant of the springs can be different in the three directions. 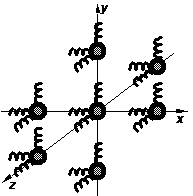 We will come back to this picture shortly when we make more sense of thermal energy.

But, what about the bond energy? Well, it really does depend on the real bonds, the real chemical bonds. However, we can develop reasonable estimates in terms of the well depths of the pair-wise interactions for the bond energy that work for practically all pure substances. Carrying out the analysis to make sense of bond energy and to make sense of thermal energy is what the next two models are about.