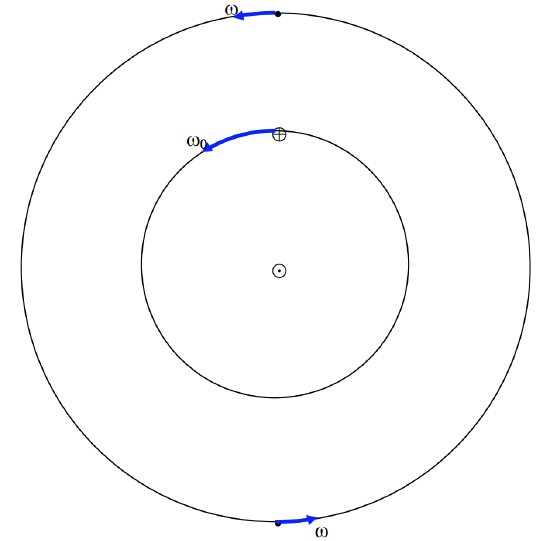 Equation \ref{8.4.1} enables us to calculate \(p\) given \(a\). The more interesting problem is to calculate \(a\) given \(p\). Thus, you are searching for asteroids near the opposition point one night, and a new planet swims into your ken. (That’s from a poem by Keats, by the way.) You see that it is moving retrograde with respect to the stars by so many arcseconds per hour. Assuming that it is moving in a circular orbit, what is the radius of its orbit? The quick answer, of course, is to look at figure \(\text{VIII.6}\), but you can also keep your hand at high-school algebra in by inverting Equation \ref{8.4.1} to obtain On elimination of \(α\) from Equations \ref{8.4.3} and \ref{8.4.4}, we find that the planet is at a stationary point when its angular distance from the opposition point is given by

On inversion of this Equation (do it!), we find that the heliocentric distance of a planet which reaches it stationary point at an angular distance \(ε\) from the opposition point is 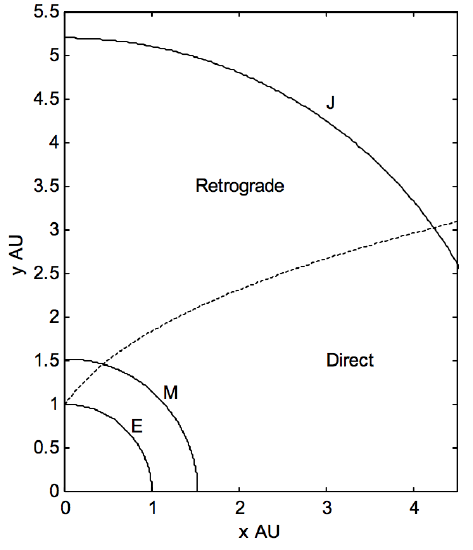 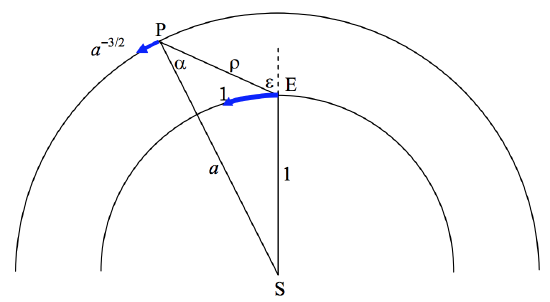 and this is the required proper motion. In this Equation, geometry shows that

The more interesting and practical problem, however, is that you have observed an asteroid at an angular distance \(ε\) from the opposition point, and it is moving at an angular speed \(p\) relative to the starry background. (We’ll count \(p\) as positive if the proper motion is direct – i.e. if the asteroid is moving eastward relative to the stars. The sign of \(ε\) does not matter.) You are going to have to invert Equation \ref{8.4.10}. I am not sure if this can easily be done algebraically, so your challenge is to write a computer program that will return a numerically given \(p\) and \(ε\) as input data. It can be done, but I shall not pretend that it is easy.

I have written my own Fortran program to invert Equation \(\ref{8.4.10}\), using Newton-Raphson iteration, and here are the answers it gives me.

My computer failed to do example number 3! In other words, given a proper motion of \(−15"/\text{hr}\) and an opposition distance of \(40^\circ\), it could not tell me the heliocentric distance!

If you carry out the same analysis for inferior planets, you will find that the Equations that correspond to Equations 8,4,10-12 are as follows:

This is the same as Equation \ref{8.4.11}, except that, for an inferior planet, \(ε\) is the elongation from the Sun and there are two solutions for \(α\), one acute and the other obtuse. As Galileo announced: Cynthiae figuras aemulatur mater amorum.

The Equation that corresponds to Equation \ref{8.4.12} is

which differs slightly from Equation \ref{8.4.12} As an exercise, you might like to convince yourself – either from the Equations or just from the geometry of the situation − that the proper motion relative to the stars of any inferior planet in a circular orbit at greatest elongation is independent of the radius of the orbit. What is this proper motion in arcsec per hour?

Summary. The graphs and Equations in this section will enable an estimate to be made of the radius of the orbit of an asteroid to be estimated from a single night’s observation of its proper motion and angular distance from the opposition point (superior asteroid) or from the Sun (inferior asteroid). The assumptions made are that Earth and asteroid are in coplanar circular orbits. While this is not the case for many asteroids, it is a reasonable approximation for most of the asteroids at least in the main belt. However, there are some combinations of \(p\) and \(ε\) for which a solution cannot be obtained, and, for inferior asteroids, there are always two possible solutions.