You can feel the heat transfer from a fire and from the Sun. Similarly, you can sometimes tell that the oven is hot without touching its door or looking inside—it may just warm you as you walk by. The space between the Earth and the Sun is largely empty, without any possibility of heat transfer by convection or conduction. In these examples, heat is transferred by radiation. That is, the hot body emits electromagnetic waves that are absorbed by our skin: no medium is required for electromagnetic waves to propagate. Different names are used for electromagnetic waves of different wavelengths: radio waves, microwaves, infrared radiation, visible light, ultraviolet radiation, X-rays, and gamma rays. Figure \(\PageIndex{1}\): Most of the heat transfer from this fire to the observers is through infrared radiation. The visible light, although dramatic, transfers relatively little thermal energy. Convection transfers energy away from the observers as hot air rises, while conduction is negligibly slow here. Skin is very sensitive to infrared radiation, so that you can sense the presence of a fire without looking at it directly. (credit: Daniel X. O’Neil)

The energy of electromagnetic radiation depends on the wavelength (color) and varies over a wide range: a smaller wavelength (or higher frequency) corresponds to a higher energy. Because more heat is radiated at higher temperatures, a temperature change is accompanied by a color change. Take, for example, an electrical element on a stove, which glows from red to orange, while the higher-temperature steel in a blast furnace glows from yellow to white. The radiation you feel is mostly infrared, which corresponds to a lower temperature than that of the electrical element and the steel. The radiated energy depends on its intensity, which is represented in the figure below by the height of the distribution.

Electromagnetic Waves explains more about the electromagnetic spectrum and Introduction to Quantum Physics discusses how the decrease in wavelength corresponds to an increase in energy. All objects absorb and emit electromagnetic radiation. The rate of heat transfer by radiation is largely determined by the color of the object. Black is the most effective, and white is the least effective. People living in hot climates generally avoid wearing black clothing, for instance. Similarly, black asphalt in a parking lot will be hotter than adjacent gray sidewalk on a summer day, because black absorbs better than gray. The reverse is also true—black radiates better than gray. Thus, on a clear summer night, the asphalt will be colder than the gray sidewalk, because black radiates the energy more rapidly than gray. An ideal radiator is the same color as an ideal absorber, and captures all the radiation that falls on it. In contrast, white is a poor absorber and is also a poor radiator. A white object reflects all radiation, like a mirror. (A perfect, polished white surface is mirror-like in appearance, and a crushed mirror looks white.)

Figure \(\PageIndex{3}\): This illustration shows that the darker pavement is hotter than the lighter pavement (much more of the ice on the right has melted), although both have been in the sunlight for the same time. The thermal conductivities of the pavements are the same.

Gray objects have a uniform ability to absorb all parts of the electromagnetic spectrum. Colored objects behave in similar but more complex ways, which gives them a particular color in the visible range and may make them special in other ranges of the nonvisible spectrum. Take, for example, the strong absorption of infrared radiation by the skin, which allows us to be very sensitive to it. The rate of heat transfer by emitted radiation is determined by the Stefan-Boltzmann law of radiation: Skin is a remarkably good absorber and emitter of infrared radiation, having an emissivity of 0.97 in the infrared spectrum. Thus, we are all nearly (jet) black in the infrared, in spite of the obvious variations in skin color. This high infrared emissivity is why we can so easily feel radiation on our skin. It is also the basis for the use of night scopes used by law enforcement and the military to detect human beings. Even small temperature variations can be detected because of the \(T^4\) dependence. Images, called thermographs, can be used medically to detect regions of abnormally high temperature in the body, perhaps indicative of disease. Similar techniques can be used to detect heat leaks in homes Figure \(\PageIndex{5}\), optimize performance of blast furnaces, improve comfort levels in work environments, and even remotely map the Earth’s temperature profile.

All objects emit and absorb radiation. The net rate of heat transfer by radiation (absorption minus emission) is related to both the temperature of the object and the temperature of its surroundings. Assuming that an object with a temperature \(T_1\) is surrounded by an environment with uniform temperature \(T_2\) the net rate of heat transfer by radiation is \[\dfrac{Q_{net}}{t} = \sigma e A(T_2^4 - T_1^4),\] where \(e\) is the emissivity of the object alone. In other words, it does not matter whether the surroundings are white, gray, or black; the balance of radiation into and out of the object depends on how well it emits and absorbs radiation. When \(T_2 > T_1\), the quantity \(Q_{net}/t\) is positive; that is, the net heat transfer is from hot to cold.

Take-Home Experiment: Temperature in the Sun

What is the rate of heat transfer by radiation, with an unclothed person standing in a dark room whose ambient temperature is \(22.0^oC\). The person has a normal skin temperature of \(33.0^oC\) and a surface area of \(1.50 \, m^2\). The emissivity of skin is 0.97 in the infrared, where the radiation takes place.

We can solve this by using the equation for the rate of radiative heat transfer.

The Earth receives almost all its energy from radiation of the Sun and reflects some of it back into outer space. Because the Sun is hotter than the Earth, the net energy flux is from the Sun to the Earth. However, the rate of energy transfer is less than the equation for the radiative heat transfer would predict because the Sun does not fill the sky. The average emissivity (e) of the Earth is about 0.65, but the calculation of this value is complicated by the fact that the highly reflective cloud coverage varies greatly from day to day. There is a negative feedback (one in which a change produces an effect that opposes that change) between clouds and heat transfer; greater temperatures evaporate more water to form more clouds, which reflect more radiation back into space, reducing the temperature. The often mentioned greenhouse effect is directly related to the variation of the Earth’s emissivity with radiation type (see the figure given below). The greenhouse effect is a natural phenomenon responsible for providing temperatures suitable for life on Earth. The Earth’s relatively constant temperature is a result of the energy balance between the incoming solar radiation and the energy radiated from the Earth. Most of the infrared radiation emitted from the Earth is absorbed by carbon dioxide \((CO_2)\) and water \((H_2O)\) in the atmosphere and then re-radiated back to the Earth or into outer space. Re-radiation back to the Earth maintains its surface temperature about \(40^oC\) higher than it would be if there was no atmosphere, similar to the way glass increases temperatures in a greenhouse. Figure \(\PageIndex{6}\): The greenhouse effect is a name given to the trapping of energy in the Earth’s atmosphere by a process similar to that used in greenhouses. The atmosphere, like window glass, is transparent to incoming visible radiation and most of the Sun’s infrared. These wavelengths are absorbed by the Earth and re-emitted as infrared. Since Earth’s temperature is much lower than that of the Sun, the infrared radiated by the Earth has a much longer wavelength. The atmosphere, like glass, traps these longer infrared rays, keeping the Earth warmer than it would otherwise be. The amount of trapping depends on concentrations of trace gases like carbon dioxide, and a change in the concentration of these gases is believed to affect the Earth’s surface temperature.

The greenhouse effect is also central to the discussion of global warming due to emission of carbon dioxide and methane (and other so-called greenhouse gases) into the Earth’s atmosphere from industrial production and farming. Changes in global climate could lead to more intense storms, precipitation changes (affecting agriculture), reduction in rain forest biodiversity, and rising sea levels.

Heating and cooling are often significant contributors to energy use in individual homes. Current research efforts into developing environmentally friendly homes quite often focus on reducing conventional heating and cooling through better building materials, strategically positioning windows to optimize radiation gain from the Sun, and opening spaces to allow convection. It is possible to build a zero-energy house that allows for comfortable living in most parts of the United States with hot and humid summers and cold winters. 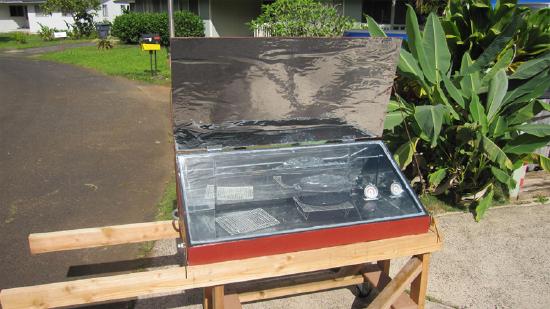 Figure \(\PageIndex{7}\): This simple but effective solar cooker uses the greenhouse effect and reflective material to trap and retain solar energy. Made of inexpensive, durable materials, it saves money and labor, and is of particular economic value in energy-poor developing countries. (credit: E.B. Kauai)

Conversely, dark space is very cold, about \(3K (-454^oF)\), so that the Earth radiates energy into the dark sky. Owing to the fact that clouds have lower emissivity than either oceans or land masses, they reflect some of the radiation back to the surface, greatly reducing heat transfer into dark space, just as they greatly reduce heat transfer into the atmosphere during the day. The rate of heat transfer from soil and grasses can be so rapid that frost may occur on clear summer evenings, even in warm latitudes.

The cost of energy is generally believed to remain very high for the foreseeable future. Thus, passive control of heat loss in both commercial and domestic housing will become increasingly important. Energy consultants measure and analyze the flow of energy into and out of houses and ensure that a healthy exchange of air is maintained inside the house. The job prospects for an energy consultant are strong.

Problem Solving Strategies for the Methods of Heat Transfer

emissivity
measure of how well an object radiates

greenhouse effect
warming of the Earth that is due to gases such as carbon dioxide and methane that absorb infrared radiation from the Earth’s surface and reradiate it in all directions, thus sending a fraction of it back toward the surface of the Earth

Stefan-Boltzmann law of radiation
\(\frac{Q}{t}=σeAT^4\), where σ is the Stefan-Boltzmann constant, \(A\) is the surface area of the object, \(T\) is the absolute temperature, and \(e\) is the emissivity