Whenever we look into a mirror, or squint at sunlight glinting from a lake, we are seeing a reflection. When you look at this page, too, you are seeing light reflected from it. Large telescopes use reflection to form an image of stars and other astronomical objects. The law of reflection is illustrated in Figure \(\PageIndex{1}\), which also shows how the angles are measured relative to the perpendicular to the surface at the point where the light ray strikes. We expect to see reflections from smooth surfaces, but Figure \(\PageIndex{2}\) illustrates how a rough surface reflects light. Since the light strikes different parts of the surface at different angles, it is reflected in many different directions, or diffused. 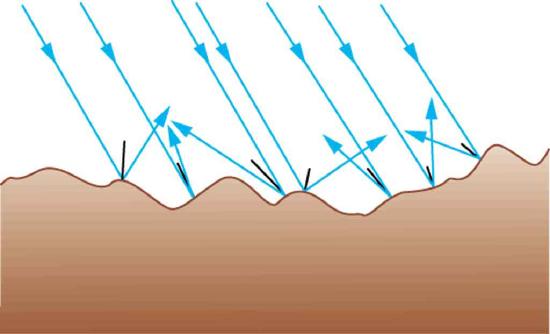 Figure \(\PageIndex{2}\): Light is diffused when it reflects from a rough surface. Here many parallel rays are incident, but they are reflected at many different angles since the surface is rough. Figure \(\PageIndex{3}\): (left) When a sheet of paper is illuminated with many parallel incident rays, it can be seen at many different angles, because its surface is rough and diffuses the light. (right) A mirror illuminated by many parallel rays reflects them in only one direction, since its surface is very smooth. Only the observer at a particular angle will see the reflected light. Figure \(\PageIndex{4}\): Moonlight is spread out when it is reflected by the lake, since the surface is shiny but uneven. (credit: Diego Torres Silvestre, Flickr)

Definition: THE LAW OF REFLECTION

When we see ourselves in a mirror, it appears that our image is actually behind the mirror. This is illustrated in Figure \(\PageIndex{5}\). We see the light coming from a direction determined by the law of reflection. The angles are such that our image is exactly the same distance behind the mirror as we stand away from the mirror. If the mirror is on the wall of a room, the images in it are all behind the mirror, which can make the room seem bigger. Although these mirror images make objects appear to be where they cannot be (like behind a solid wall), the images are not figments of our imagination. Mirror images can be photographed and videotaped by instruments and look just as they do with our eyes (optical instruments themselves). The precise manner in which images are formed by mirrors and lenses will be treated in later sections of this chapter Figure \(\PageIndex{5}\): Our image in a mirror is behind the mirror. The two rays shown are those that strike the mirror at just the correct angles to be reflected into the eyes of the person. The image appears to be in the direction the rays are coming from when they enter the eyes.

Take a piece of paper and shine a flashlight at an angle at the paper, as shown in Figure \(\PageIndex{5a}\). Now shine the flashlight at a mirror at an angle. Do your observations confirm the predictions in Figure \(\PageIndex{3}\)? Shine the flashlight on various surfaces and determine whether the reflected light is diffuse or not. You can choose a shiny metallic lid of a pot or your skin. Using the mirror and flashlight, can you confirm the law of reflection? You will need to draw lines on a piece of paper showing the incident and reflected rays. (This part works even better if you use a laser pencil.)

mirror
smooth surface that reflects light at specific angles, forming an image of the person or object in front of it