Compared to an adult, a smaller displacement will move a toddlers center of gravity outside the base of support. Image adapted from A man and a toddler take a leisurely walk on a boardwalk by Steve Hillibrand via Wikimedia Commons.

The center of gravity of a person’s body is above the pivots in the hips, which is relatively high compared to the size of the support base formed by the feet, so displacements must be quickly controlled. This control is a nervous system function that is developed when we learn to hold our bodies erect as infants. For increased stability while standing, the feet should be spread apart, giving a larger base of support. Stability is also increased by bending the knees, which lowers the center of gravity toward the base of support. A cane, a crutch, or a walker increases the stability of the user by widening the base of support. Due to their disproportionately large heads, young children have their center of gravity between the shoulders, rather than down near the hips, which decreases their stability and increases the likelihood of reaching a tipping point.[2] 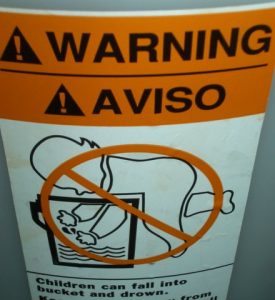 Warning label on a bucket indicating the danger of children falling into a bucket and drowning. This danger is caused by the inherent instability of the toddler body. Image Credit: GodsMoon via Wikimedia Commons.