As discussed at the end of subsection 11.2.4, our goal now is to find an equation for magnetism that, unlike the Biot-Savart law, will not end up being a dead end when we try to extend it to nonstatic situations.6 Experiments show that Gauss' law is valid in both static and nonstatic situations, so it would be reasonable to look for an approach to magnetism that is similar to the way Gauss' law deals with electricity. 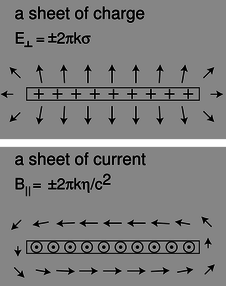 How can we do this? Figure a, reproduced from page 664, is our roadmap. Electric fields spread out from charges. Magnetic fields curl around currents. c / The definition of the circulation, \(\Gamma\).

We break the edge into tiny parts \(\mathbf{s}_j\), and for each of these parts, we define a contribution to the circulation using the dot product of \(d\mathbf{s}\) with the magnetic field:
\[\begin{equation*} \Gamma = \sum \mathbf{s}_j\cdot\mathbf{B}_j \end{equation*}\]

The circulation is a measure of how curly the field is. Like a Gaussian surface, an Ampèrian surface is purely a mathematical construction. It is not a physical object.

In figure b/2, the field is perpendicular to the edges on the ends, but parallel to the top and bottom edges. A dot product is zero when the vectors are perpendicular, so only the top and bottom edges contribute to \(\Gamma\). Let these edges have length \(s\). Since the field is constant along both of these edges, we don't actually have to break them into tiny parts; we can just have \(\mathbf{s}_1\) on the top edge, pointing to the left, and \(\mathbf{s}_2\) on the bottom edge, pointing to the right. The vector \(\mathbf{s}_1\) is in the same direction as the field \(\mathbf{B}_1\), and \(\mathbf{s}_2\) is in the same direction as \(\mathbf{B}_2\), so the dot products are simply equal to the products of the vectors' magnitudes. The resulting circulation is

But \(\eta s\) is (current/length)(length), i.e., it is the amount of current that pierces the Ampèrian surface. We'll call this current \(I_{through}\). We have found one specific example of the general law of nature known as Ampère's law: What direction is the current in figure e?

Based on how \(\ell\) entered into the derivation in example 13, how should it be interpreted? Is it the total length of the wire?

Surprisingly, we never needed to know the radius of the solenoid in example 13. Why is it physically plausible that the answer would be independent of the radius?

Example 13 shows how much easier it can sometimes be to calculate a field using Ampère's law rather than the approaches developed previously in this chapter. However, if we hadn't already known something about the field, we wouldn't have been able to get started. In situations that lack symmetry, Ampère's law may make things harder, not easier. Anyhow, we will have no choice in nonstatic cases, where Ampère's law is true, and static equations like the Biot-Savart law are false.

Here's an informal sketch for a proof of Ampère's law, with no pretensions to rigor. Even if you don't care much for proofs, it would be a good idea to read it, because it will help to build your ability to visualize how Ampère's law works. First we establish by a direct computation (homework problem 26) that Ampère's law holds for the geometry shown in figure f/1, a circular Ampèrian surface with a wire passing perpendicularly through its center. If we then alter the surface as in figure f/2, Ampère's law still works, because the straight segments, being perpendicular to the field, don't contribute to the circulation, and the new arc makes the same contribution to the circulation as the old one it replaced, because the weaker field is compensated for by the greater length of the arc. It is clear that by a series of such modifications, we could mold the surface into any shape, f/3.

Next we prove Ampère's law in the case shown in figure f/4: a small, square Ampèrian surface subject to the field of a distant square dipole. This part of the proof can be most easily accomplished by the methods of section 11.4. It should, for example, be plausible in the case illustrated here. The field on the left edge is stronger than the field on the right, so the overall contribution of these two edges to the circulation is slightly counterclockwise. However, the field is not quite perpendicular to the top and bottoms edges, so they both make small clockwise contributions. The clockwise and counterclockwise parts of the circulation end up canceling each other out. Once Ampère's law is established for a square surface like f/4, it follows that it is true for an irregular surface like f/5, since we can build such a shape out of squares, and the circulations are additive when we paste the surfaces together this way.

By pasting a square dipole onto the wire, f/6, like a flag attached to a flagpole, we can cancel out a segment of the wire's current and create a detour. Ampère's law is still true because, as shown in the last step, the square dipole makes zero contribution to the circulation. We can make as many detours as we like in this manner, thereby morphing the wire into an arbitrary shape like f/7.

What about a wire like f/8? It doesn't pierce the Ampèrian surface, so it doesn't add anything to \(I_{through}\), and we need to show that it likewise doesn't change the circulation. This wire, however, could be built by tiling the half-plane on its right with square dipoles, and we've already established that the field of a distant dipole doesn't contribute to the circulation. (Note that we couldn't have done this with a wire like f/7, because some of the dipoles would have been right on top of the Ampèrian surface.)

It is vitally important to realize that these equations are only true for statics. They are incorrect if the distribution of charges or currents is changing over time. For example, we saw on page 598 that the changing magnetic field in an inductor gives rise to an electric field. Such an effect is completely inconsistent with the static version of Maxwell's equations; the equations don't even refer to time, so if the magnetic field is changing over time, they will not do anything special. The extension of Maxwell's equations to nonstatic fields is discussed in section 11.6.

◊ Figure g/1 shows a wire with a circular Ampèrian surface drawn around its waist; in this situation, Ampère's law can be verified easily based on the equation for the field of a wire. In panel 2, a second wire has been added. Explain why it's plausible that Ampère's law still holds.

◊ Figure h is like figure g, but now the second wire is perpendicular to the first, and lies in the plane of, and outside of, the Ampèrian surface. Carry out a similar analysis.

◊ This discussion question is similar to questions A and B, but now the Ampèrian surface has been moved off center.

◊ The left-hand wire has been nudged over a little. Analyze as before.

◊ You know what to do.