Most of us are familiar with the more obvious properties of magnets and compass needles. A magnet, often in the form of a short iron bar, will attract small pieces of iron such as nails and paper clips. Two magnets will either attract each other or repel each other, depending upon their orientation. If a bar magnet is placed on a sheet of paper and iron filings are scattered around the magnet, the iron filings arrange themselves in a manner that reminds us of the electric field lines surrounding an electric dipole. All in all, a bar magnet has some properties that are quite similar to those of an electric dipole. The region of space around a magnet within which it exerts its magic influence is called a magnetic field, and its geometry is rather similar to that of the electric field around an electric dipole – although its nature seems a little different, in that it interacts with iron filings and small bits of iron rather than with scraps of paper or pith-balls.

The resemblance of the magnetic field of a bar magnet to the electric field of an electric dipole was sometimes demonstrated in Victorian times by means of a Robison Ball-ended Magnet, which was a magnet shaped something like this:

The geometry of the magnetic field (demonstrated, for example, with iron filings) then greatly resembled the geometry of an electric dipole field. Indeed it looked as though a magnet had two poles (analogous to, but not the same as, electric charges), and that one of them acts as a source for magnetic field lines (i.e. field lines diverge from it), and the other acts as a sink (i.e. field lines converge to it). Rather than calling the poles “positive” and “negative”, we somewhat arbitrarily call them “north” and “south” poles, the “north” pole being the source and the “south” pole the sink. By experimenting with two or more magnets, we find that like poles repel and unlike poles attract.

In truth a magnetic field has no sources and no sinks. This is even expressed as one of Maxwell’s equations, div \(\textbf{B} = 0\), as being one of the defining characteristics of a magnetic field. The magnetic lines of force always form closed loops. Inside a bar magnet (even inside the connecting rod of a Robison magnet) the magnetic field lines are directed from the south pole to the north pole. If a magnet, even a Robison magnet, is cut in two, we do not isolate two separate poles. Instead each half of the magnet becomes a dipolar magnet itself.

All of this is very curious, and matters stood like this until Oersted made an outstanding discovery in 1820 (it is said while giving a university lecture in Copenhagen), which added what may have seemed like an additional complication, but which turned out to be in many ways a great simplification. He observed that, if an electric current is made to flow in a wire near to a freely suspended compass needle, the compass needle is deflected. Similarly, if a current flows in a wire that is free to move and is near to a fixed bar magnet, the wire experiences a force at right angles to the wire.

From this point on we understand that a magnetic field is something that is primarily associated with an electric current. All the phenomena associated with magnetized iron, nickel or cobalt, and “lodestones” and compass needles are somehow secondary to the fundamental phenomenon that an electric current is always surrounded by a magnetic field. Indeed, Ampère speculated that the magnetic field of a bar magnet may be caused by many circulating current loops within the iron. He was right! – the little current loops are today identified with electron spin. 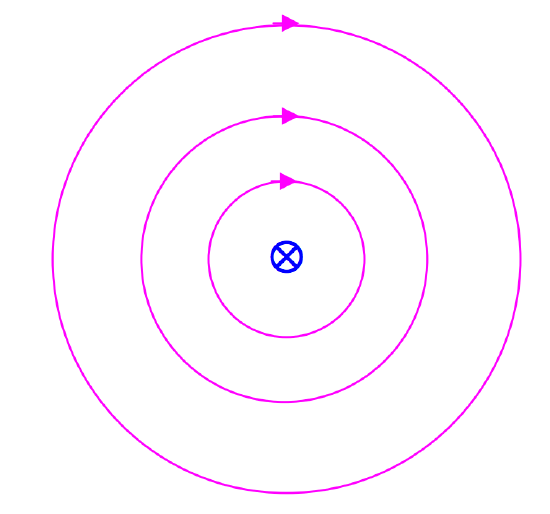