We now consider the scenario shown in Figure \(\PageIndex{1}\). Here a wave arriving from the left along a lossless transmission line having characteristic impedance \(Z_0\) arrives at a termination located at \(z=0\). The impedance looking into the termination is \(Z_L\), which may be real-, imaginary-, or complex-valued. The questions are: Under what circumstances is a reflection – i.e., a leftward traveling wave – expected, and what precisely is that wave? 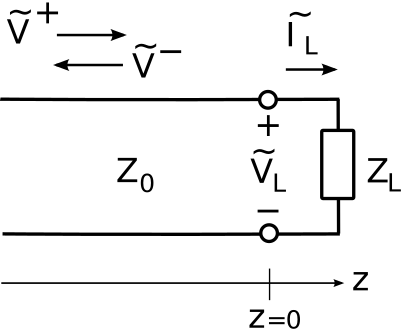 If the terminating impedance is equal to the characteristic impedance of the transmission line, then there is no reflection.

Note also that \(\Gamma\) is not the ratio of \(I_0^-\) to \(I_0^+\). The ratio of the current coefficients is actually \(-\Gamma\). It is quite simple to show this with a simple modification to the above procedure and is left as an exercise for the student.

The voltage reflection coefficient \(\Gamma\), given by Equation \ref{m0084_eGamma}, determines the magnitude and phase of the reflected wave given the incident wave, the characteristic impedance of the transmission line, and the terminating impedance.

We now consider values \(\Gamma\) that arise for commonly-encountered terminations.

Open Circuit. An “open circuit” is the absence of a termination. This condition implies \(Z_{L} \rightarrow \infty\), and subsequently \(\Gamma \rightarrow+1\). Since the current reflection coefficient is \(-\Gamma\), the reflected current wave is 180◦ out of phase with the incident current wave, making the total current at the open circuit equal to zero, as expected.

Short Circuit. “Short circuit” means \(Z_L = 0\), and subsequently \(\Gamma = −1\). In this case, the phase of \(\Gamma\) is 180◦, and therefore, the potential of the reflected wave cancels the potential of the incident wave at the open circuit, making the total potential equal to zero, as it must be. Since the current reflection coefficient is \(−\Gamma = +1\) in this case, the reflected current wave is in phase with the incident current wave, and the magnitude of the total current at the short circuit non-zero as expected.

Other Terminations. Any other termination, including series and parallel combinations of any number of devices, can be expressed as a value of \(Z_L\) which is, in general, complex-valued. The associated value of \(|\Gamma|\) is limited to the range 0 to 1. To see this, note: