Quarter-wavelength sections of transmission line play an important role in many systems at radio and optical frequencies. The remarkable properties of open- and short-circuited quarter-wave line are presented in Section 3.16 and should be reviewed before reading further. In this section, we perform a more general analysis, considering not just open- and short-circuit terminations but any terminating impedance, and then we address some applications.

Quarter-wave lines play a very important role in RF engineering. As impedance inverters, they have the useful attribute of transforming small impedances into large impedances, and vice-versa – we’ll come back to this idea later in this section. First, let’s consider how quarter-wave lines are used for impedance matching. Look what happens when we solve Equation \ref{m0091_eQWII} for \(Z_0\): \[Z_0 = \sqrt{Z_{in}(\lambda/4) \cdot Z_L } \label{m0091_eQWZ0} \] This equation indicates that we may match the load \(Z_L\) to a source impedance (represented by \(Z_{in}(\lambda/4)\)) simply by making the characteristic impedance equal to the value given by the above expression and setting the length to \(\lambda/4\). The scheme is shown in Figure \(\PageIndex{1}\).

Design a transmission line segment that matches \(300~\Omega\) to \(50~\Omega\) at 10 GHz using a quarter-wave match. Assume microstrip line for which propagation occurs with wavelength 60% that of free space.

The line is completely specified given its characteristic impedance \(Z_0\) and length \(l\). The length should be one-quarter wavelength with respect to the signal propagating in the line. The free-space wavelength \(\lambda_0=c/f\) at 10 GHz is \(\cong 3\) cm. Therefore, the wavelength of the signal in the line is \(\lambda=0.6\lambda_0\cong 1.8\) cm, and the length of the line should be \(l=\lambda/4 \cong 4.5\) mm.

It should be noted that for this scheme to yield a real-valued characteristic impedance, the product of the source and load impedances must be a real-valued number. In particular, this method is not suitable if \(Z_L\) has a significant imaginary-valued component and matching to a real-valued source impedance is desired. One possible workaround in this case is the two-stage strategy shown in Figure \(\PageIndex{2}\). In this scheme, the load impedance is first transformed to a real-valued impedance using a length \(l_1\) of transmission line. This is accomplished using Equation \ref{m0093_eZ} (quite simple using a numerical search) or using the Smith chart (see “Additional Reading” at the end of this section). The characteristic impedance \(Z_{01}\) of this transmission line is not critical and can be selected for convenience. Normally, the smallest value of \(l_1\) is desired. This value will always be less than \(\lambda/4\) since \(Z_{in}(l_1)\) is periodic in \(l_1\) with period \(\lambda/2\); i.e., there are two changes in the sign of the imaginary component of \(Z_{in}(l_1)\) as \(l_1\) is increased from zero to \(\lambda/2\). After eliminating the imaginary component of \(Z_L\) in this manner, the real component of the resulting impedance may then be transformed using the quarter-wave matching technique described earlier in this section.

A particular patch antenna exhibits a source impedance of \(Z_A = 35+j35~\Omega\). (See “Microstrip antenna” in “Additional Reading” at the end of this section for some optional reading on patch antennas.) Interface this antenna to \(50~\Omega\) using the technique described above. For the section of transmission line adjacent to the patch antenna, use characteristic impedance \(Z_{01}=50~\Omega\). Determine the lengths \(l_1\) and \(l_2\) of the two segments of transmission line, and the characteristic impedance \(Z_{02}\) of the second (quarter-wave) segment.

Although quarter-wave matching techniques are generally effective and commonly used, they have one important contraindication, noted above – They often result in structures that are large. That is, any structure which employs a quarter-wave match will be at least \(\lambda/4\) long, and \(\lambda/4\) is typically large compared to the associated electronics. Other transmission line matching techniques – and in particular, single stub matching (Section 3.23) – typically result in structures which are significantly smaller.

The impedance inversion property of quarter-wavelength lines has applications beyond impedance matching. The following example demonstrates one such application: Figure \(\PageIndex{3}\): Use an inductor to decouple the DC input power from the RF output signal at the output of a common-emitter RF amplifier

Transistor amplifiers for RF applications often receive DC current at the same terminal which delivers the amplified RF signal, as shown in Figure \(\PageIndex{3}\). The power supply typically has a low output impedance. If the power supply is directly connected to the transistor, then the RF will flow predominantly in the direction of the power supply as opposed to following the desired path, which exhibits a higher impedance. This can be addressed using an inductor in series with the power supply output. This works because the inductor exhibits low impedance at DC and high impedance at RF. Unfortunately, discrete inductors are often not practical at high RF frequencies. This is because practical inductors also exhibit parallel capacitance, which tends to decrease impedance. 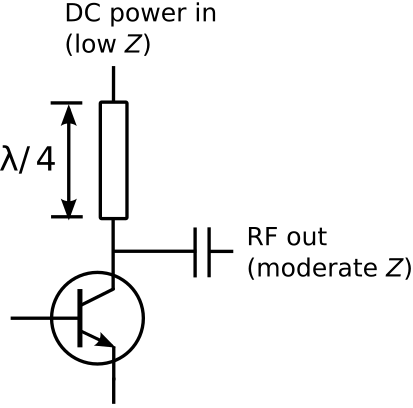