Heat engines do not include electrical and chemical engines (such as muscles). The Carnot theorems don’t apply to them. The name Carnot is French, so it is pronounced “Car-no” rather than “Car-not”.

1. Expand at constant T = T1 from A to B, decreasing pressure. Absorb heat q1 from high-temperature heat bath.

2. Expand even more, adibatically, from B to C, decreasing pressure still more.

4. Contract even more, adibatically, increasing pressure still more, until system comes back to original state A.

(This problem is stolen from a GRE Physics test.)

b. The entropy of the hot reservoir decreases.

c. The entropy of the system increases.

e. The efficiency of the cycle is independent of the working substance.

Suppose a quasistatic Carnot cycle is executed with a working substance of steam rather than ideal gas. Furthermore, suppose that the cycle straddles the liquid-vapor coexistence curve, so that when the working substance is at a high volume and low pressure it is steam, but when it is at a low volume and high pressure it is liquid water. Then the (p, V) diagram of the cycle resembles the following: 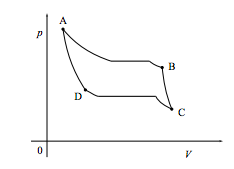 a. Explain the significance of the flat portions of the isotherms.

c. Below is a list of properties of the Carnot cycle executed with an ideal gas. Which of these properties remain true for our liquifying Carnot cycle?

ii. The adiabats BC and DA are described by pVγ = constant.

iii. The work done is the area enclosed by the cycle.