If you did the mini lab or played with one of the Fourier analysis apps you should have detected a different Fourier spectrum for instruments or voices that were different, even when they were playing the same note. According to Fourier, complex waveforms can be constructed from combinations of sine waves. It is these additional frequencies that are the main property that give a musical tone its timbre. As shown in the graphs below, we can tell a trumpet from a trombone, even when they play the same note because there are different frequencies present. These variations in frequency change the waveform (top two graphs which can be seen with an oscilloscope) and the Fourier spectrum (lower two graphs which can be determined from a Fourier analysis).

Below the Fourier analysis of each of the above waveforms using the program Audacity. Notice that the fundamental frequency (the lowest frequency) is the same for both instruments (around \(230\text{ Hz}\)) so they are playing the same note, even though they will sound different. 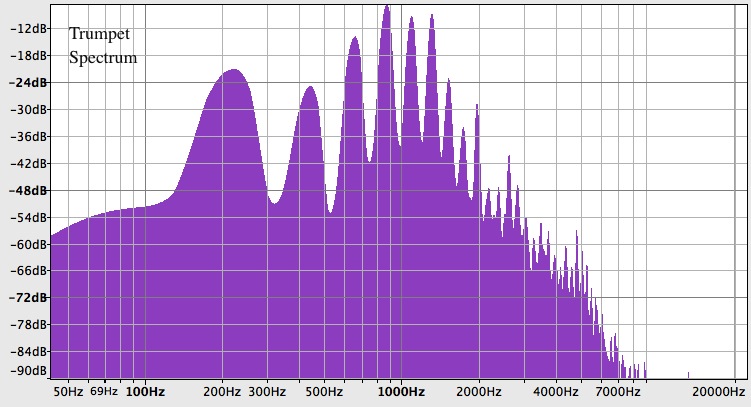 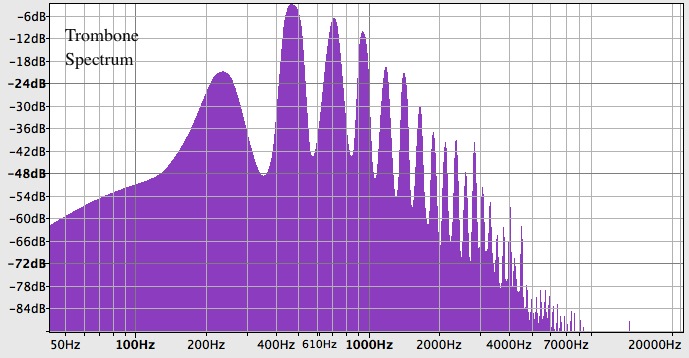 The French mathematician Fourier discovered that you could build any repeating waveform by adding enough sine and/or cosine waves. This is called Fourier synthesis. It is also possible to analyze a repeating waveform to find out how much of each frequency is present. This is called Fourier analysis. For a repeating wave the extra frequencies present are all multiples of the fundamental and are called harmonic frequencies. The timbre of a musical instrument depends on the amount of each harmonic that is present.