The following are a few pictures of nodal lines by Thomas Erndl from a web site with a discussion and collection of nodal surfaces for guitars and violins. Notice that they are similar to other cases of surfaces (in the simulation and videos above) but because of the shape of the guitar and irregular thickness of the surface, the nodal patterns are not exactly symmetric. 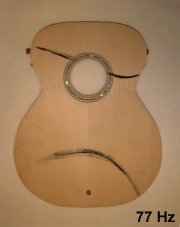 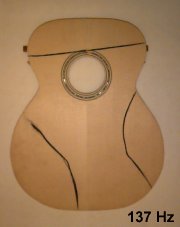 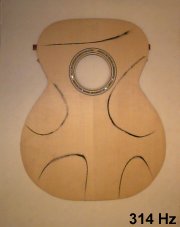 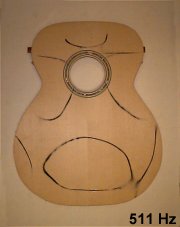 As was the case for a string, surfaces have many different resonance frequencies. For the string these other resonances are all multiples of the fundamental. However if you look carefully at the Chladni patterns of the plate and the guitar and violin you will notice that these resonance frequencies are not harmonics (multiples) of the fundamental. These higher frequencies are called overtones to distinguish them from harmonics. Strings and tubes (discussed in the next chapter) have overtones that are harmonic while surfaces typically do not. The rectangular plate simulation shows that a few of the overtones are multiples of the fundamental frequency but most are not. We also saw in the simulation that some modes are degenerate, meaning two different sets of mode numbers have the same frequency.

The Chladni plate resonance frequencies tend to be sharp or high Q-factor resonances, as are the circular and rectangular modes in the various simulations linked from this page. Because the bodies of most musical instruments do not have symmetric shapes and are not of uniform thickness (due to supporting structures inside), the resonances of musical stringed instruments are not sharp. As mentioned in Chapter 4 on resonances, the Q-factor is a measure of how wide the resonance curve is. In general, stringed instruments have surfaces with low Q-factor, in other words, broad resonance curves. The trade off is that, as previously mentioned, a low Q-factor also means more oscillations before being damped out. This means the sound will last longer before dissipating.

There is a second way to see the vibrational modes of a surface, called holographic interferometry. In the chapter on wave behavior we found that if two waves arrive at a point and are out-of-phase they undergo destructive interference and cancel out. If they are in-phase they interfere constructively. Suppose we reflect laser light off of the vibrating surface of a guitar into a camera. Now shine a second, reference laser beam directly into the camera. If the reflected beam comes off a surface that has moved half a wavelength (at the instance the camera shutter opens) the two beams will be out of phase and not expose the film. If the surface has moved a whole wavelength (or two or three, etc.) the reflected beam will be in-phase with the reference beam and expose the film. The result is a contour map of the deflections of the surface from equilibrium.

In the following picture (from the BBC report In Pictures: Stringed Theory) the concentric lines show regions where the guitar surface is vibrating in and out. The center of each region of concentric circles is where the movement is a maximum. A dark center indicates movement that is out of phase (inward) from a center that is light colored (outward). It is also possible to make successive pictures into a video of the surface as it changes over time. 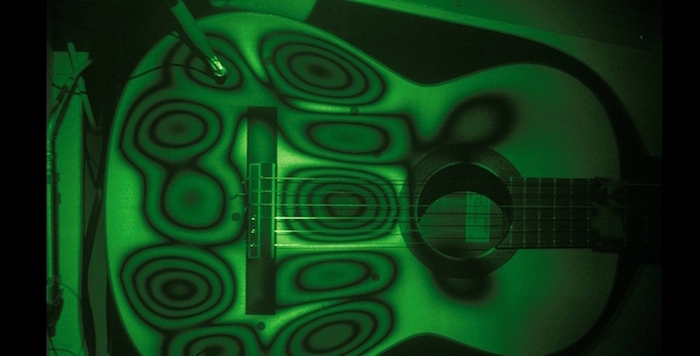