Probably the earliest instruments were simple flutes. The earliest known flute comes from Europe and is dated at about \(35,000\) years old. Other woodwind instruments include the clarinet, oboe, bassoon and saxophone families of instruments.

In woodwind instruments (as in all instruments) there is something that vibrates to create sound and a resonating body which selects a fundamental frequency and overtones and amplifies them. From the above discussion we know that the tube itself is the resonating body. What creates the initial vibration? In the clarinet and saxophone family of instruments a single reed, clamped to a mouthpiece vibrates to create the initial sound. Most reeds, shown on the left, below, are made from a type of cane plant. 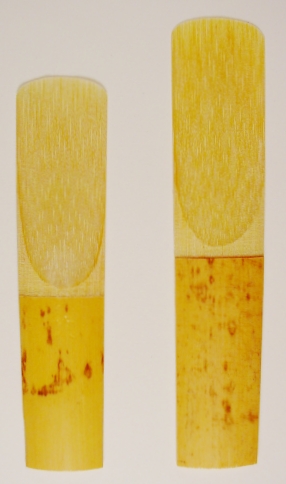 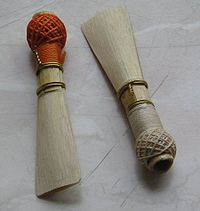 On the right above is a picture of a double reed. This is the vibrating device for oboes, bassoons and bagpipes. In most reed instruments the reed or double reed is clamped in the mouth so that the mouth can change the frequencies being produced. The adjustment of the performer's mouth to correctly produce the initial sound is called embouchure. Even with this control, however, a reed mouthpiece without the instrument sounds basically like a duck call (and in fact many duck calls are based on a simple reed). Most reed instruments are blown closed, meaning that the air flowing past the reed tends to force it shut after which it springs open due to its own stiffness.

There does not appear to be anything that vibrates on a flute but we know vibrations are the source of all sound. So what vibrates? Most flutes have a sharp edged hole called a fipple that splits a stream of air. Initially the air stream goes into the flute cavity. As pressure builds up the stream will suddenly shift to flow to the outside of the flute. When the air pressure inside drops the stream re-directs back into the cavity. It is this back and forth motion of the air (which occurs very rapidly) that is the source of vibration for a flute. The sound produced (before resonance with the body of the flute) is called an edge tone.

Other kinds of flutes, including pan flutes and the modern orchestral flute, have a hole across which the musician blows. The edge of the hole acts the same way as the edge of a fipple with air first going into the flute, then building up pressure to make the flow go out. This rapid back and forth air flow causes the vibration that makes the initial sound. The picture on the right, below, shows an air stream being divided by a sharp edge. Notice the turbulent pattern generated as air first goes above and then below the edge. 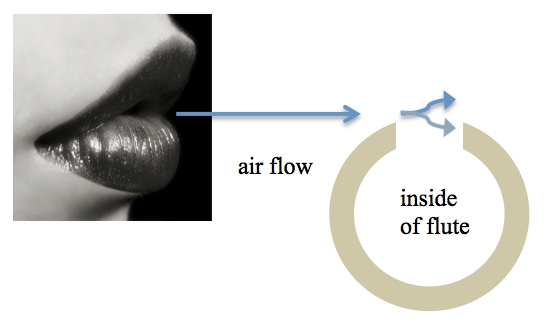 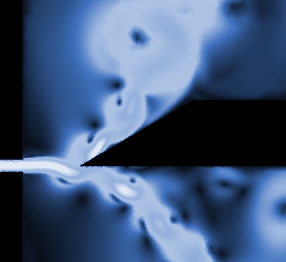 One way to change the fundamental frequency of a tubed instrument is to put holes in the tube which can be closed or opened with the fingers. As shown in the figure below, a hole allows a displacement anti-node of air to occur at the hole location, changing the resonant frequency. Flutes, clarinets and saxophones all use this method to change the fundamental frequency being played.

There are several problems with putting holes in a tube to get different resonant frequencies. The size of the hole affects the shape of the wave inside the tube which changes the overtones that are present. The result is small errors in pitch that vary with the range and volume of the notes being played. Early flutes and recorders from the Renaissance had holes of varying size to correct for these errors. Modern flutes have hole sizes that get slightly larger at the end furthest from the fipple which give more uniform changes in pitch. By using mechanical keys to cover the holes the hole size can be adjusted for sound quality rather than convenience of the performer. Covering and opening holes also changes the amount of impedance mismatch between inside and outside the instrument, so that different notes may sound slightly louder or softer, depending on the fingering.

A second problem for tube instruments with holes is that the human hand is of finite size. For a longer tube this becomes problematic; a normal hand cannot reach the hole locations necessary to make a specific note. Most modern instruments use levers called keys attached to pads on springs to cover holes that are further away than can be reached by a normal sized hand. A second reason to use keys is that more holes can be used. Human hands can only cover ten holes at one time because we only have ten fingers. To be capable of playing all \(12\) notes of an octave some keys are normally closed unless pressed to open them.

Flutes tend to have uniform diameter along their length but other wind instruments do not. The diagrams below show the difference in cross sectional shape between a flute, clarinet and saxophone. Bassoons are shaped more like a flute (the same cross section along the length) whereas oboes are more shaped like a saxophone with an increasing diameter and a bell on the end. Notice that the saxophone and oboe are flared along their entire length, the clarinet is flared only at the end and the flute has no flaring. As discussed above, the flaring changes the impedance mismatch between waves inside the instrument and sound transmitted away from the instrument. Notice that the lengths are different for these instruments as well. Not shown in the cross section diagram of the flute is the cork which provides an adjustable end to the left of the mouth (or embouchure) hole of the flue. The cork allows the resonances inside the flute to be tuned so that reflections from cork end reinforce sound generated at the embouchure hole. 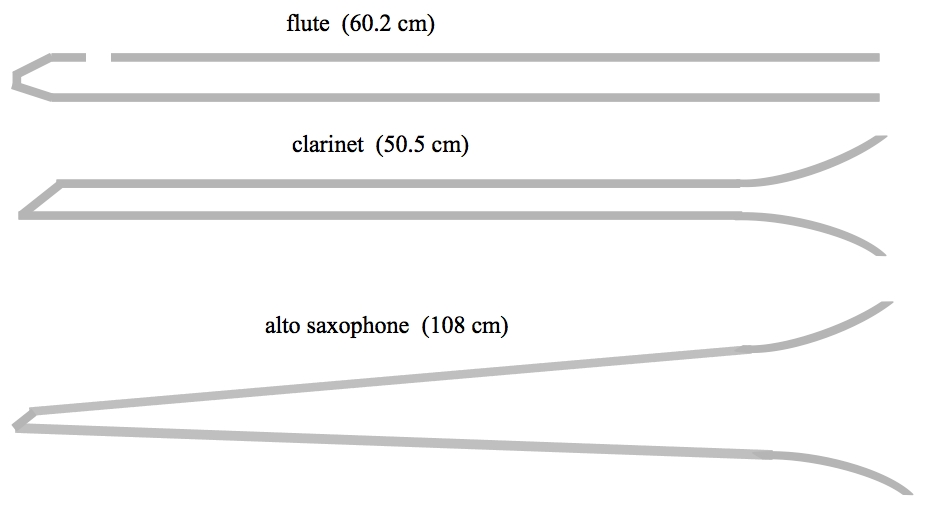 What effect does the changing diameter have on the simple standing waves that we saw for a tube with constant diameter? The result, shown in the graphs below, is that the wave amplitudes are squeezed a little bit. Compare these results for the first few harmonics of a tube with constant diameter to those for the flute, above. We know from Fourier analysis that more overtones have to be present to get the more complicated wave shapes shown below. So a changing tube width will greatly affect the timbre of the instrument. 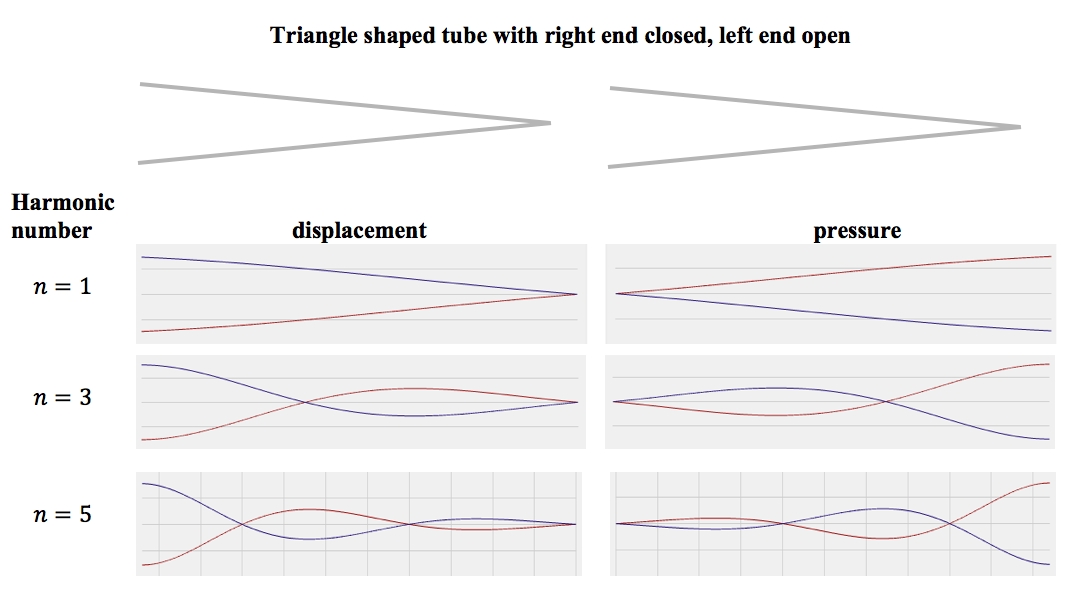