Brass instruments use the vibration of the player's lips with the proper embouchure to initiate the sound. As in the case of a reed instrument, buzzing the lips creates a broad spectrum of sound. Resonances in the instrument select one of these frequencies to be the fundamental of a note. Unlike most reed instruments in which the vibrating part is blown closed, for brass instruments the lips are blown open. Air rushing between the lips lowers the pressure and the lips close. Then pressure builds up and the lips open again. Blown open and blown closed vibrators both depend on the Bernoulli effect; moving air has lower pressure causing the reed or lip to close.

We know that tubes of different lengths have different resonant frequencies. Brass instruments change the length of the tube using one of two mechanisms. Slide trombones have a set of double tubes that slide over each other to make the length longer. Trumpets, french horns, tubas and other brass instruments use a set of valves to change the length of the tube. There are usually three and occasionally four valves on most brass instruments. The diagram below shows one of several ways to construct a valve that changes the effective tube length. Pushing the valve down causes the air path to detour through a section of pipe making the total path longer. 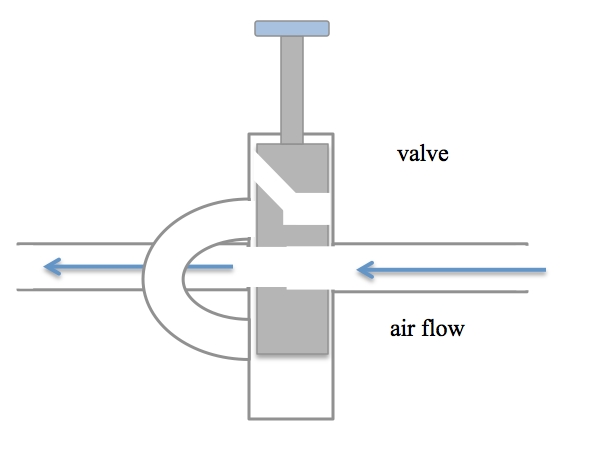 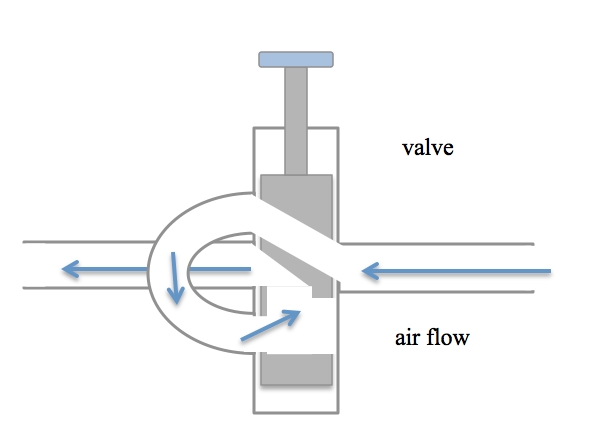 Brass instruments tend to have large bells and are louder than woodwinds on average because of better impedance matching as mentioned above. End effects due to the large bell also tends to shift the frequency spectra significantly from what would be expected from a simple tube. Although we expect a tube closed on one end to only have odd multiple overtones, the measured frequencies of a trumpet are harmonic. The table below compares the predicted frequencies of a simple tube of length \(1.4\text{ m}\) (the approximate length of a trumpet) and the measured frequencies of a real trumpet. Notice that the predicted overtones are odd multiples of the fundamental but the real instrument has all harmonics.

Why do the frequencies shift so much? For higher frequency overtones the standing wave extends further out into the bell region as shown in the diagram below. Since in effect higher harmonics 'see' a longer tube, the frequency of these overtones are shifted downward a little. The fundamental, because it 'sees' a shorter tube shifts up a little. The impedance mismatch for different overtones will also be different because of this effect. Higher frequencies escape more easily than lower frequencies because higher frequencies extend out further into the bell region of the instrument (as mentioned above, the amount of reflection at the end of a tube is affected by the diameter of the tube relative to the wavelength - so longer wavelengths reflect further out from the end of the bell). This means the overtones of a brass instrument are louder than in the case of a saxophone or clarinet. The effects of the bell on various overtones also gives brass instruments their unique timbre in addition to shifting the frequency spectrum. 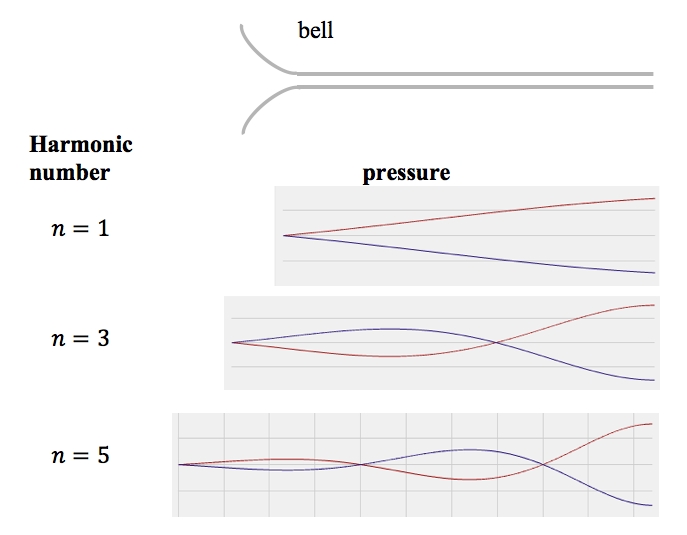 The mouthpiece also has an effect on the frequencies present in a brass instrument. The mouthpiece forms a small Helmholtz cavity with a volume resonance with a low Q-factor. As you may recall from Chapter Four on resonance, a low Q-factor means a very broad resonance. For modern instruments this resonances tends to weaken the lower harmonics (including the fundamental) so that the higher harmonics have a larger effect on the timbre.

As a final complication, brass instruments sometimes use mutes to change not only the volume but also the frequency spectrum radiated by the instrument. A mute does not seal up the bell end of a brass instrument but it does weakly produce extra frequencies corresponding to a tube that is closed on both ends. This changes the timbre of the instrument in addition to reducing the volume.