The following diagrams are the first eight modes of a circular membrane, clamped along the outer edge (seen in the previous simulation). The mode numbers and frequencies are also given for each one. The figures are shown in the order of increasing frequencies rather than increasing mode numbers. In the figure the green area is moving towards you while the red area moves away; then these areas switch and go in the opposite direction. 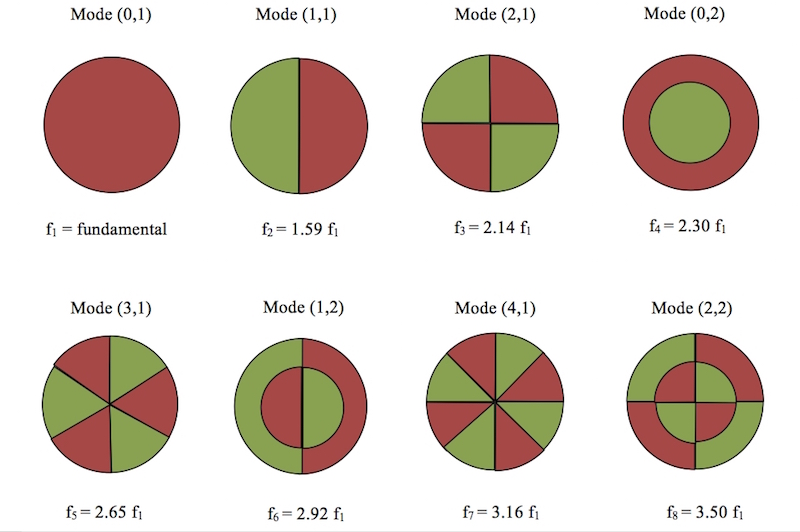 A second feature of percussion instruments is the short duration of the sound. As mentioned in Chapter 9 on Fourier analysis, the uncertainty principle comes into play for short pulses of sound. A short pulse requires many frequencies and few of these additional frequencies are multiples of a fundamental frequency as can be verified by a Fourier analysis of a cymbal or drum strike. Combinations of frequencies which are not multiples of some fundamental frequency usually sound like noise to our ears. Examples of sound sources that have lots of frequencies which are not harmonics include slaps, cracks, crashes, hand claps and thunder claps.

Thunder is formed when there is an electrical discharge from a thundercloud that suddenly heats air to nearly \(30,000\:^{\circ}\text{C}\) along the path of the discharge. The air can reach a pressure ten times that of normal atmospheric pressure in a few microseconds. The sudden expansion causes a shock wave to propagate away from the region of discharge. Due to irregularities in the path and heating of the air, a large range of frequencies centered around \(100\text{ Hz}\) are produced. Variations in air density in the storm and local topographical features also affect the range of frequencies and what someone on the ground will hear. Some frequencies are below \(20\text{ Hz}\) and cannot be heard by humans but can be felt. As a result we do not hear thunder as a discernible tone.

Just like in the case of a string, the location of the initial displacement of a membrane activates different modes. Below are some images from a simulation of a circular membrane. The modes which are activated are shown in the columns below the membrane; the first column is \(n=0\) and \(m\) equal to one, two, three, etc.; the second column is \(n=1\) and \(m\) equal to one, two, three, etc. In the first picture the mouse was used to "strike" the membrane in the center. Notice that mostly modes in the first column are activated (modes \((0,1),\: (0,2),\: (0,3)\) etc. as you go from top to bottom) with a few in the third column (modes \((3,1),\: (3,2),\) etc. This is the case of a drumstick with a relatively large end (a mallet) hitting the center (note that the displacement is broad). The second picture is the case where a drumstick with a smaller profile made an indention on the drum head at the center (the "poke" selection in the simulation). For this case the fundamental modes are almost exclusively activated (only the first column is lit up). In the third picture the drum head is struck off center. Now many higher modes are activated (as indicated by the colors in the squares at the bottom). This tells us that, even though we still may not hear a pitch (because the overtones are not harmonic) the drum will sound different because there are different overtones. This is very similar to the case of a string that is plucked or bowed; the initial shape determines which specific modes of vibration (overtones) are activated. 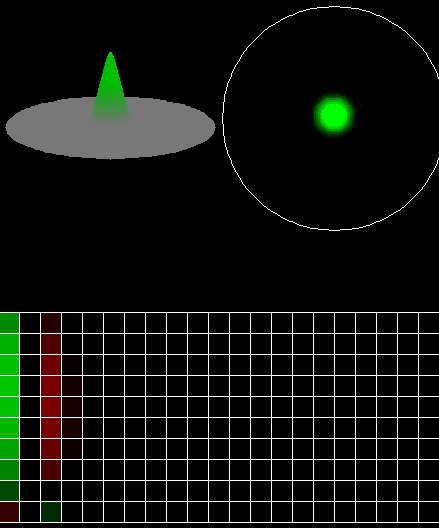 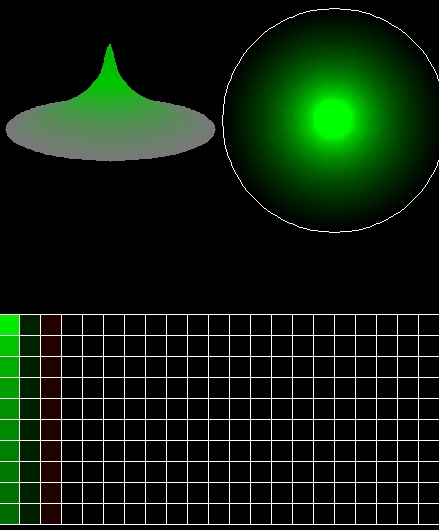 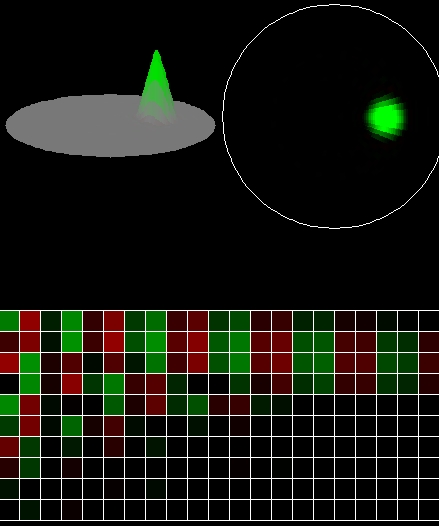 Most drum membranes are stretched over a hollow body, often cylindrical in shape. This configuration allows for two different types of resonances. The air cavity inside the drum will have a set of resonance frequencies determined by its shape and size. Like the air resonances in a guitar body or in a tube, this will emphasize some frequencies at the expense of others and this effect may even be strong enough to give the drum a pitch (see the next section). The body of the drum also has its own modes of vibration as shown in the following diagram of the cylindrical sides of a drum. Here, green is an area moving towards the center of the drum while the red area moves away from the center. This means, again, that some of the membrane's overtones will be reinforced by resonance while others are not, much like the body of a guitar or violin reinforce some (but not all) of the string harmonics. 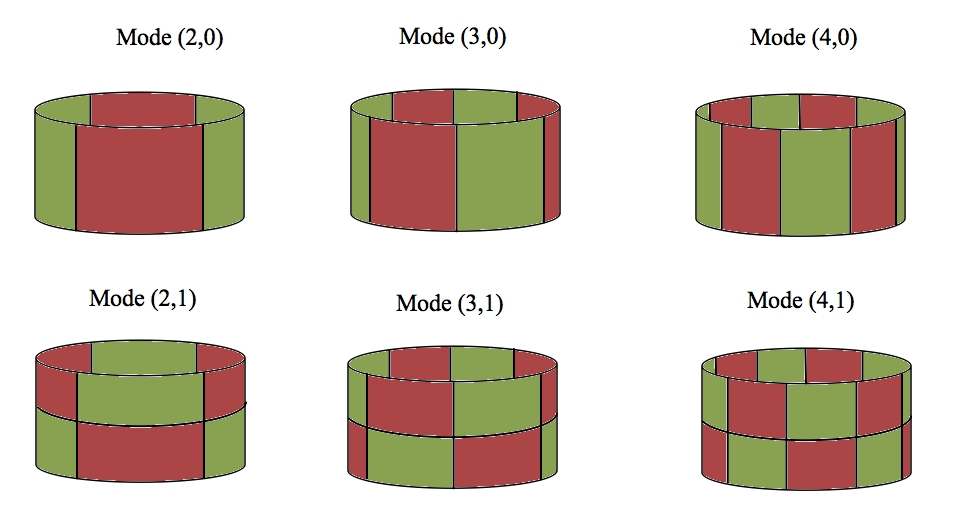 The body of the drum has one further function in that it controls how sound coming from the top surface of the membrane interacts with sound from the bottom of the surface. As shown in the following figure, with no body these sounds would tend to cancel due to destructive interference (as the surface moves it creates a pressure wave from the top that is exactly out of phase with the pressure wave from the bottom). If, instead, the sound from the underside has to travel through the drum body so that it comes out in phase (half a wavelength behind) then there is constructive interference. This will depend on the wavelength produced so a body of a given size will emphasize some frequency modes and tend to cancel others. This is why tall drums and drums with irregular shaped sides (like conga drums) sound different than shorter drums, even if they have the same drum head. 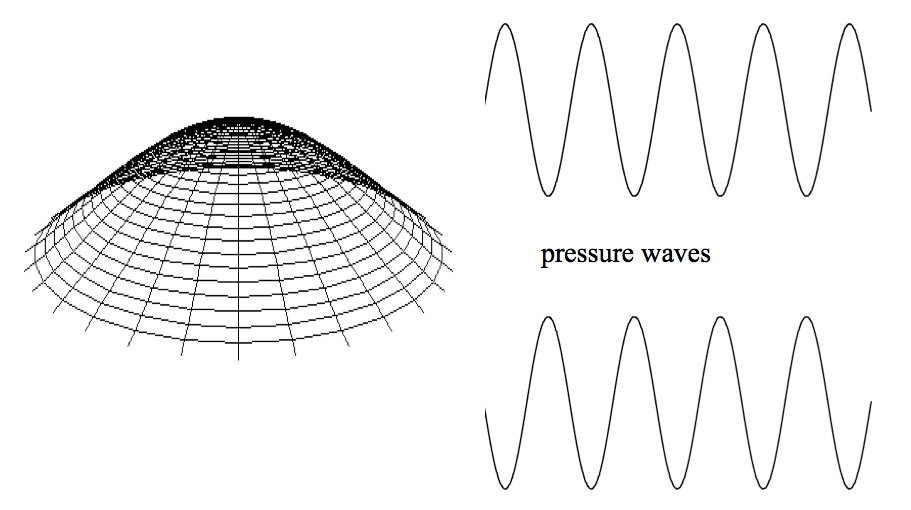 Here is a YouTube of a cymbal crash in slow motion. The modes are not the same as for a drum head because the edges of the cymbal are free instead of clamped and the cymbal is not flat. Because they are made of metal, which is stiffer than a drum head, the frequencies produced are higher. But the same sort of thing happens; the overtones are not harmonics so the cymbal does not have a fixed pitch.