If we want a percussion instrument to have a perceptible pitch there are two choices. We can activate only one single mode so that there is just one frequency present or we can modify the instrument so that at least some of the overtones are harmonic. The tabla is an Indian drum where the head changes thickness from the outer edge inwards which can be done by rubbing material into the drum head. This shifts the overtones to be harmonic so that the tabla has a specific pitch, as can be heard in this tabla YouTube video.

The tympani or kettle drum used in symphony orchestras also has a distinctive pitch. These drums have a closed, bowl shaped body which may be hemispherical or parabolic in shape. The air trapped inside tends to lower the overtones because it cannot move freely. This plus the shape of the body ends up causing the drum to have harmonics at a fifth (ratio of three to two), a major seventh (a ratio of \(15\) to eight) and an octave (ratio of two to one) above the fundamental. These harmonics are enough to cause our ears to hear a pitch instead of noise.

Many percussion instruments are composed of a series of bars of different lengths that are struck. The xylophone, vibraphone, glockenspiel, triangle, and marimba are examples. As a first approximation of these instruments we consider the modes of vibration of a rod. In general the modes do not produce harmonics but if the main fundamental has a larger amplitude than the other modes it will be perceived as a pitch.

The following pictures are the first four modes of a free rod. The displacement is exaggerated; real xylophone bars, for example, are much too stiff to bend that much. The first mode has a node at the center so the left side will go down while the right side moves up and the middle stays fixed. The second mode has a two nodes at one quarter (\(0.25\)) and three quarters (\(0.75\)) of the way along the length. Mode three has nodes at about \(0.16,\: 0.50\) and \(0.84\) (meters if the rod is one meter long). You can see higher modes and the vibrational motion of these modes with the simulation of vibrations of simple systems from Wolfram (you may need to download their plug in to play with this demonstration). Click on the + sign under time in the simulation to view the controls for simulating the mode vibrations over time. Here is a simulation of vibrations of a bar.

The xylophone, vibraphone, glockenspiel and marimba have rectangular bars that have the similar modes as the ones shown above for a rod. The bars are of different lengths and are usually suspended at the nodes of the second vibrational mode. This helps damp out other modes so that each bar has a predominant frequency, usually the first overtone (second vibrational mode). The rates of decay of different modes are not the same for these instruments. This means that the initial tone may sound harsh because it has a large number of anharmonic overtones (not multiples of the fundamental) but the tone may improve in the next few milliseconds as some overtones fade away more quickly than the first overtone. Like strings and other instruments, striking the bar in the middle is more likely to excite the lower overtones. Marimbas and vibraphones also have resonating tubes of different lengths beneath each bar which acts as a resonator.

Marimbas originally were made with gourds as resonators but these have been replaced by tubes in modern instruments. Without these tubes the sound from the top of the bar would be exactly out of phase with sound from the bottom and tend to cancel since the top and bottom move in the same direction when struck (as was the case for a drum head without a body, mentioned above). The tubes create a resonance sound wave exactly out of phase with the sound from the bottom of the marimba bar, canceling it. This accentuates the fundamental frequency from the top of the bar and also produces harmonics for that frequency. This is part of the reason why marimbas and vibraphones are more melodic sounding but the xylophone, which does not have resonators, has a harsh sound. A final characteristic of the bars on a marimba that give it its distinctive sound is they are not precisely rectangular. The under surface of the bar is carved and tuned by ear to produce higher harmonics. The smaller mass of the bar where it is being struck also decreases the impedance mismatch between the bar and the mallet, allowing more energy to go into the bar from the mallet. The cross sectional shape of a marimba bar is shown below. 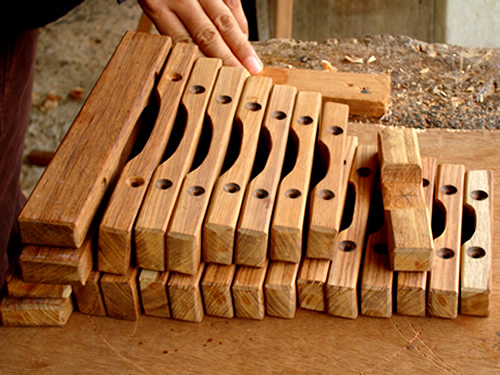 The orchestral triangle is, in effect, a rod fixed at one end and bent into three sections. Here are the first four vibrational modes for a rod fixed at one end. Notice that the left end is fixed and stays does not move. The vibrations of these and higher modes can also be seen using the Wolfram simulation of vibrations of simple systems or with this simulation of a vibrating bar.

Orchestral chimes (sometimes called tubular bells) are tubes of different lengths that are struck at the top with a light, soft hammer. An interesting property of these instruments is that the fundamental frequency does not (and in fact none of the vibrational frequencies) correspond to the perceived pitch (called the strike tone). The vibrational modes are similar to a free rod and it turns out that modes four, five and six are approximately in the ratio two to three to four (there are frequencies at \(2f,\: 2.9f\) and \(3.9f\) of the perceived strike tone, with frequency \(f\)). This is an example of virtual pitch (or missing fundamental which was discussed in Chapter 10). Our ear/brain system interprets the harmonics as belonging to a fundamental frequency that is not actually present.

Bells have been around as musical instruments almost as long as flutes. The vibrational modes depend on the diameter of the bell, the thickness and the exact shape. These modes are tuned by trimming material from the inside of the bell so that there are harmonics of the fundamental frequency, giving the bell a distinct tone. Even so the modes of vibration are quite complicated as shown in these animations of bell modes. Many higher bell modes can be seen in these holograms of ancient Chinese bells and in this animation of ancient bell modes. In the hologram pictures the center of the circular regions are anti-nodes. Notice that some centers are dark at the same time other centers are light. This indicates that they are moving in opposite directions (are \(180\text{ degrees}\) out of phase). Some of the bells pictured here were made as early as \(1766\text{ BCE}\). The different modes can be excited by striking the bell in different locations so that one bell can play more than one note.

Steel drums or steelpans are traditionally made by bending and stretching the top part of a large, \(55\) gallon oil drum to play different notes at different locations on the head. They became popular in the immigrant, former slave communities of the Caribbean in the 1930s. Each region of the surface of the drum is stretched until it has the harmonics of the desired note.

The gamelan is an orchestra of instruments from Indonesia that consists of a large number of mostly percussion instruments (occasionally stringed instruments and voice are included). Each player in the orchestra strikes one or more different instruments in turn to produce the melody. The tuning has five notes to a scale and so sounds odd to western ears (western music uses an eight tone scale).