Reverberation is the combined effects of multiple echoes in a room or concert hall as heard by a listener. Nearly all indoor spaces have reverberation but it is often missing at outdoor venues. If the walls of the room are hard there will be repeated echoes which may begin to overlap and cause the musical sound to be mushy or muddled. If the walls absorb too much of the sound the room will sound dead. We rely on reverberation to give us a sense of how large the room is; large concert halls have a different reverberation time than a small room.

In most of the simulations, animations and drawings of waves in this book (and others) it is assumed that the amplitude (and hence the loudness) of a sound wave doesn't change much as it travels. If the wave front is from a distant source it will be approximately flat (a so called plane wave) and the amplitude does not change as the wave propagates. However for a local source the wave front spreads out in a spherical shape and the further away you are from the sound source the softer it sounds. In other words, the amplitude of a small sound source obeys an inverse square law as it spreads out into open space (Chapter 8). This means the sound intensity decreases as \(1/r^{2}\) where \(r\) is the distance from the source. As a result of the inverse square law the direct sound arriving at the listener will be slightly less loud than the sound at the source and all reflected sound will be even softer. Doubling the distance from the sound will cause the amplitude to be \(1/2^{2} = 1/4\) as intense. Likewise tripling the distance means the intensity will be \(1/9^{\text{th}}\) as much.

In the room without carpet in the demo (above) a sudden sound (a clap) was made in one location. It takes sound, traveling at \(345\text{ m/s}\) a few milliseconds to reach the receiver (a video recorder in this case). This is the direct sound and is slightly less loud than the original sound at the source. Split seconds later echoes start to arrive at the receiver. Each echo arrives later and with lower volume than the previous one because it travels a bit further. For example the first echo might come off the ceiling, the next from the nearest wall, the next from the wall behind the receiver, etc. A graph is shown below of the initial sound (blue at \(t_{1}\)) followed by the direct sound (green at \(t_{2}\)) and then the echoes (red, \(t_{reflected}\) and afterward). Only the first few echos are shown. 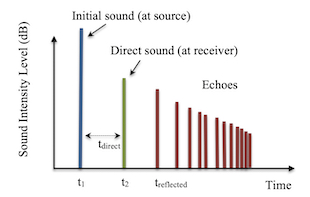 Suppose a continuous sound is made at the front of an auditorium for some length of time instead of a clap like in the demonstration video. The first graph below shows the sound at the source, starting at time \(t_{1}\), ending at time \(t_{f}\) and lasting a length of time, \(T\). A listener will experience a slight delay until the sound reaches them (\(t_{direct}\) in the second graph) and hear the sound as starting at \(t_{2}\). A split second after the listener hears the sound directly from the source they will begin to hear echoes off walls, floor and ceiling, causing the sound to be slightly louder (the stair steps in \(\text{SIL}\) starting at \(t_{reflected}\)). The listener does not hear the sound start to decay until a time \(t_{direct}\) after the sound is turned off (sound is still traveling to the listener for a brief time after the source is turned off). After a length of time \(T\) the listener hears the direct sound stop (at time \(t_{decay}\)) and only the echoes remain and they start to decay. The time it takes the sound to drop in volume by \(60\text{ dB}\) from when it starts to decay is called the reverberation time (\(T_{r}\) in the graph).

The decay of sound in the graph is fairly linear; it pretty much drops off in a straight line (the \(\text{SIL}\) scale is logarithmic so an exponential decay in intensity appears as a straight line in an intensity level graph). Real decay curves can have this shape or may be curved or may be irregular shaped. In part this depends on the shape of the room and the materials present which we investigate next.

Table \(\PageIndex{1}\): Actual values will vary depending on the exact makeup of the material. Sources: D. E. Hall, Musical Acoustics, 2002

As we saw in Chapter 7, a path difference can cause destructive or constructive interference due to a phase difference. If there is strong reflection it can be the case that reflected sound and sound coming directly from the stage may reach a listener out of phase and thus cancel destructively for a particular wavelength as shown in the diagram below. 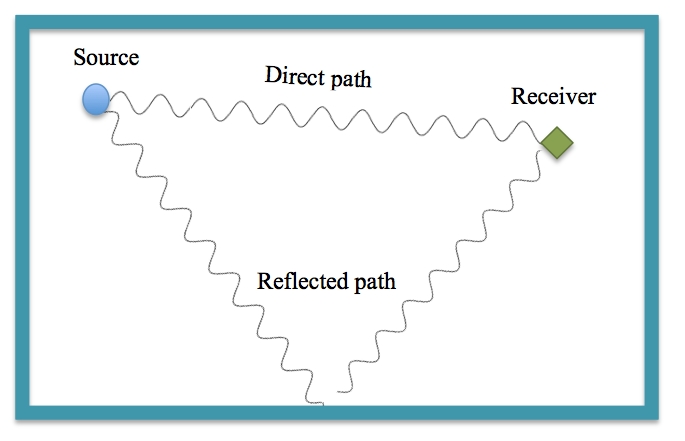 The effect depends on the amount of delay and can result in peaks and dips in the frequency spectrum at the listener location. This is sometimes called the comb effect and can be produced artificially by adding a recording to itself but with a slight delay. This can also lead to locations in a concert hall called dead spots, where the range of frequencies in the original sound source is not heard correctly. As a result of interference between the direct sound and reflected sound, different kinds of music sound better with different reverberation times. Medieval music was often performed in cathedrals with very long reverberation times, sometimes as long as \(13\text{ seconds}\). The composers and musicians of the time gradually modified the music to fit the venue. This type of music is usually very simple and uses lots of harmonic notes so that the echoes would harmonize with and reinforce the notes being sung. Pipe organ music generally sounds better with more reverberation for the same reason. In general, symphony music sounds best with less reverberation than pipe organs but with more reverberation than chamber music. Symphony halls typically have reverberation times of two to five seconds; \(2.5\text{ seconds}\) is considered optimal. Speech usually sounds best with very little reverberation; too many echoes makes the speaker difficult to understand. Opera houses and speech auditoriums are designed to have reverberation times of \(0.8\) to \(1.5\text{ seconds}\). A typical living room in a house has a reverberation time of \(0.4\text{ seconds}\).

Reverberation can be artificially added to recorded and live music using electronic equipment (sometimes referred to as comb filters). This may be done, for example to a voice to give it a more full bodied sound or to make an outdoor concert sound like it is indoors. Reverberation may also be added to give a recording a sound as if the listener was in a larger auditorium when in fact they are listening from headphones. The sound tracts of most modern recorded music, movies and TV programs are heavily processed to overcome deficiencies in the sound quality due to the acoustics of the recording location.