As we saw in Chapter 11 on stringed instruments, the equation for the Helmholtz frequency modes inside a rectangular container with height \(H\), length \(L\) and width \(W\) is \(f_{n,l,m} = v/2 ((n/L)^{2}+(l/H)^{2}+(m/W)^{2})^{1/2}\). Here \(v\) is the speed of sound in air and \(n,\: l,\) and \(m\) are mode numbers. For a given set of mode numbers there will be standing waves in the container. You can hear standing waves when you sing in a rectangular shower stall. Stand in the shower stall and, starting with a low tone, gradually increase the pitch. You will find certain notes that sound louder; these are the standing waves for that enclosure. In a rectangular auditorium the possibility of standing waves results in two problems. For a piece of music certain notes will be enhanced while others will not. You can explore these modes in this box modes simulation Applet (notice you can grab and rotate the box to see different modes from different angles).

A second problem when there are standing waves is the occurrence of nodes and anti-nodes. You can often detect these nodes by moving your head slightly to the left or right in a room where there are parallel walls and some ambient noise; you will notice the sound changes a little bit as you move your head. A listener seated at a node hears less of that frequency while a listener at a anti-node hears more. You may have noticed that auditoriums are not perfectly square but have sloping floors and ceilings and walls at an angle to the stage as seen in the picture below of Ríos Reyna Hall in Caracas, Venezuela. This is in part to eliminate or reduce standing waves. However the effects of a non-rectangular room on reflected sound can be complicated and unpredictable. As a result, acoustical design is still somewhat of an art. 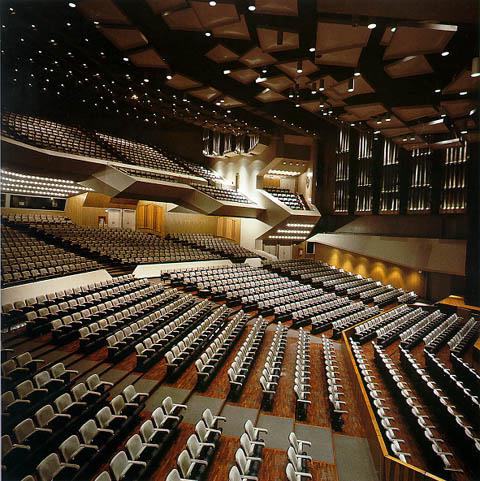 Newly constructed concert halls may be built with floating floors, mounted on springs and dampeners to isolate the space from external vibrations. The walls and ceilings may also be isolated from the surroundings using acoustically isolating connectors to attach them to external walls and ceilings. This 'box within a box' construction greatly reduces interference from external noise.

If the building is already in place it may be possible to improve the sound and remove at least some of the standing waves by using absorbing barriers of various sizes and shapes. Recall from Chapter 7 that, although sound obeys the law of reflection, if the surface has irregularities of the same size as the wavelength the reflection will be diffuse instead of specular. Obviously objects like chandeliers, seating, and lights will also interact with sound wavelengths of the same size causing diffuse reflection. Diffuse reflection tends to help prevent standing waves and dead spots.

Although it is not known if the Echea of Marcus Vitruvius Pollio actually reinforced the sound of the actor's voices onstage, a similar type of resonance cavity is used today to reduce unwanted sound from fans in air ducts. If a resonance cavity is attached to an air duct and has a resonance frequency just below the fan frequency the cavity will produce a sound wave exactly out of phase of the sound from the fan. This tends to cancel the unwanted noise from the fan.

As a final aid to getting sound from the stage of a concert hall to the listeners, a orchestral or band shell is often used. As we saw in Chapter 7, waves emitted from the focal point of a concave mirror are reflected outward in parallel beams. An orchestra shell is half a concave parabolic mirror. The orchestra or band performs at or near the focal point of the curved surface and the surface projects the sounds out in even parallel paths to the audience. These shells can be used indoors or, as in the picture below, outside. 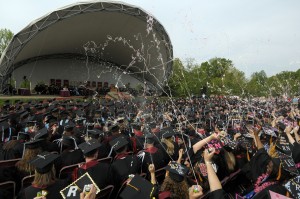