Definition of a Vector

Just being able to put numbers on physical quantities is not sufficient for describing nature. Very often physical quantities have directions. For example, a description of something’s motion is incomplete if you merely state how fast it is going. [Okay, so an asteroid is moving at 35,000 miles per hour, but is it headed for Earth?!] We therefore have the following definition for physical quantities that exhibit both these properties:

A vector is a quantity with both magnitude and direction.

There is no way to compare magnitudes of different physical quantities. If a distance vector is drawn as an arrow on the same page as a velocity vector’s arrow, the relative sizes of the two arrows are meaningless.

There are a few other things that we should say about vectors and the arrows that represent them:

One other thing... When we write a symbol for a vector quantity, we will do so with a small arrow above the letter, like this: \(\overrightarrow A\). Variables with the same letter as a defined vector that do not include an arrow, are assumed to represent the magnitude of that vector. So for example, when used in the same context, the variable A represents the magnitude of \(\overrightarrow A\).

For these mathematical quantities we call vectors to have any value to us, they have to allow for simple mathematical operations, such as addition. The directional nature of vectors makes addition much trickier than simply summing the two magnitudes. It turns out that a well-defined vector addition involves simple geometry. It goes like this: Transport one of the vectors (in a parallel fashion, so as not to change its direction) so that its tail is in contact with the head of the other vector. Then fashion a new vector such that its tail is at the open tail and its head is at the open head. 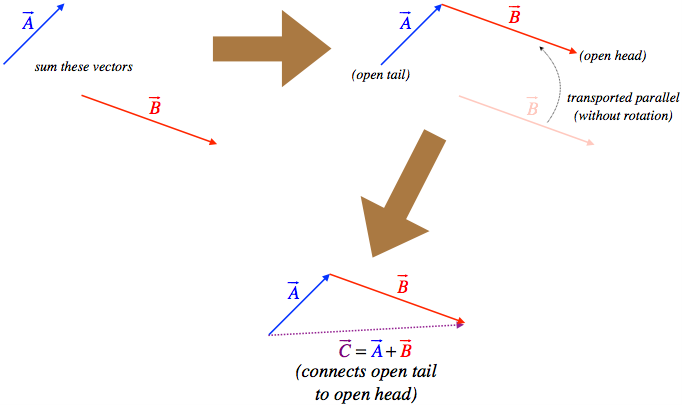 What about subtracting two vectors? Well, we can do this by following the same method as for regular numbers: Whichever vector we wish to subtract we multiply by –1, and then add the result to the other vector, which we do in the manner described above. We already know that multiplying a vector by –1 reverses its direction (and leaves its magnitude unchanged), so this is a well-defined operation for us.

The graphical method of adding vectors are not always convenient. For example, we shouldn’t have to actually measure the length of the new vector, we should be able to calculate it. Well, of course we can do this using some sophisticated knowledge of triangles. For example, given we know the lengths and directions of the two vectors we are adding, we can determine the length of the third leg of the triangle using the Law of Cosines:

With all of the lengths of the triangle legs and one of the angles (the one between \(A\) and \(B\)), we can get the other angles using the Law of Sines.

The magnitudes of the two vectors shown in the diagram below are: \(A=132\) and \(B=145\). Find the magnitude and direction (angle made with the \(x\)-axis) of the vector that is the difference of these two vectors. Using the fact that the negative of a vector is the same vector pointing in the opposite direction along with using tail-to-head vector addition, we get the following diagram for the three vectors:

While we can use these tools to mathematically solve for the sum of two vectors, it turns out that there is another way we can do it that doesn’t require quite as much geometrical reasoning. This method exploits three simple facts: The sums of components are like summing numbers, but only components along the same axes can be added. The results are then more components, which then have to be reconstructed into a vector.

So we can use perpendicular coordinate systems to describe vectors in terms of their components. Essentially this means that to describe a vector in terms of a set of three axes, we need to know three numbers. But it might be useful to actually express these vectors as a single mathematical entity, and that’s where the notion of the unit vector comes in. Vectors have magnitude and direction, and with unit vectors we can mathematically break up the vector into those two parts. The magnitude is just a number (with physical units) without direction, and a unit vector is a vector (without units) that has a length of 1, so that it can be scaled to any length without contributing anything to the magnitude. Therefore we can write a vector as a simple product:

where \(\widehat A\) is the unit vector (usually pronounced “\(A\)-hat”). It is a unitless vector of length 1 that points in the direction of the vector \( \overrightarrow A\). The value \(A\) is a number with physical units that equals the magnitude. The diagram below gives a graphic description of how this construction works for a few common physical vectors. The unit vectors provide a very basic template by defining the direction, and the magnitude fills in the template by contributing the girth and 'flavor' (physical units) of the vector. If we combine this notion with components, we can write any vector as a sum of components multiplying unit vectors in the directions of the three spatial dimensions. By convention, we give these unit vectors the names \(\widehat i\), \(\widehat j\), and \(\widehat k\) for the axes \(x\), \(y\), and \(z\), respectively. So specifically, we have:

Now we can just use this as a mathematical representation of vectors, and we do not have to appeal to geometry at all. For example,

Giving us the same result as we got before for the components of the sum of two vectors.

Repeat the calculation of Example 1.1.1, this time using components.

Breaking the two vectors into their \(x\) and \(y\) components gives:

This matches the answer found in example 1.1.1.

As you read this introduction to unit vectors, it may have occurred to you that the \( \widehat i \), \( \widehat j \), and \( \widehat k \) are essentially placeholders that provide the "that-a-way" to accompany the amount in each direction (provided by the scalar multiplying each unit vector). Of course, there is nothing special about this "hat" notation, and in fact there is another notation that is commonly used – column matrices, with three rows; one for each direction. In other words, we can make these replacements:

This means that a vector can be expressed in these two ways, both of them using the cartesian system:

Both of these notations have their practical advantages. In this text, we will stick with the "hat" notation, but you should be aware that the matrix notation is very common, so you should be comfortable using it and expect to see it frequently in classes to come.