Back in Section 1.6 and Section 1.7, we discussed circular motion at constant speed as motion that occurs because a net force pulling an object toward a central point causes the object's velocity vector to only change direction, and not magnitude. At the time, we hadn't yet discussed momentum, but clearly we can now replace "velocity vector" in the previous sentence with "momentum vector." We can write Newton's second law (Equation 4.1.4) in terms of the changing magnitude and direction of the momentum:

Circular motion at a constant speed would exhibit no change in the magnitude of momentum – the first term in Equation 6.2.1 is zero – while all of the force would go into changing the direction of momentum. As we saw back in Section 1.6, the two terms in Equation 6.2.1 are always perpendicular to each other, which means that the net force on an object going in a circle at a constant speed is always perpendicular to the momentum vector.

We are already aware of how a net torque can change the magnitude of an object's angular momentum – speeding up and slowing down rotation is something we have already looked at in detail. But what if we insist that the magnitude remain constant (the object maintains the same rotational inertia and keeps spinning at a constant rate), while only the the direction of motion changes? That is, what if the first term in Equation 6.2.2 is zero, while the second term is not? How can we construct a physical system that behaves this way? Answering this last question will require quite a lot of facility with the right hand rule, but here goes...

We start with a rotating object. We'll use as our model a bike wheel turning around an axle. The angular momentum vector will point along the axis of the wheel according to the right hand rule. Now we need a net torque that points perpendicular to the angular momentum. We can achieve this by placing on end of the wheel's axle on a support and allowing the weight of the wheel to pull it down as the support pushes up. 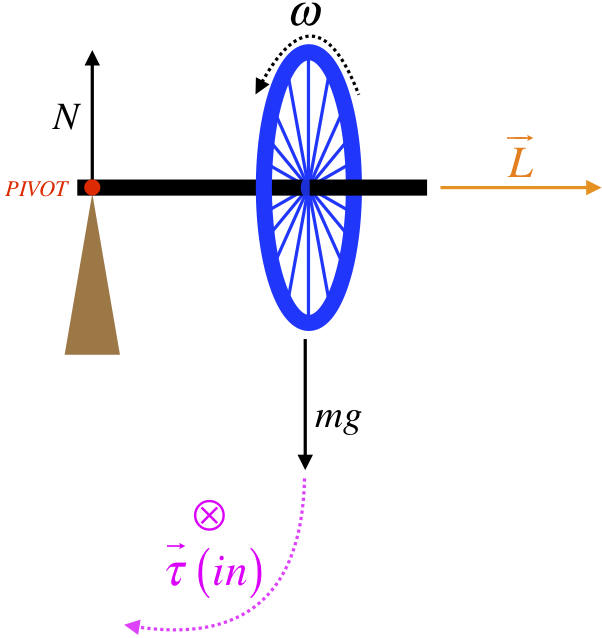 There is clearly a net torque around the pivot at the point of support, trying to turn the wheel clockwise in Figure 6.2.1. But the direction of the torque vector, according to the right hand rule, is into the page. This torque vector points in a direction that is perpendicular to the angular momentum vector, exactly as we required above.

The next question is, how does this system behave? In the case of the object going in a circle at a constant speed, the momentum vector of the object never changed length, it only rotated its direction. The way that it rotated was the change of the linear velocity vector pointed in the direction of the force (see Figure 1.7.1). To follow this same behavior, the point of the angular momentum vector must turn in the direction of the torque vector, which is into the page. That is, to behave Newton's second law for rotations, this wheel should not fall down, but instead should rotate into the page! In fact it does exactly this, rotating around the pivot in a counterclockwise direction as viewed from above. This phenomenon is known as gyroscopic precession.

While this is certainly a striking phenomenon to witness first-hand, it is quite ubiquitous in everyday life. Everyone who rides a bicycle knows that getting it to turn is a matter of leaning, not turning the handle bars. To see how this is an example of gyroscopic precession, consider the following force diagram of a tilted wheel:

The fact that there is only one force in the horizontal direction (the friction force) means that this wheel's center of mass must be accelerating to the left. If this wheel is stationary, then this is certainly happening as the wheel falls over to the left. On the other hand, if the wheel is rolling forward (into the page), and this tilt is a result of turning, then it is not falling over, but its center is mass is still accelerating to the left (centripetally, toward the center of the turn).

This explains how the tilt results in a change of the wheel's direction of motion, but not its change of orientation. That is, why does the wheel turn as its center of mass changes direction? For an explanation of this, we can look at the torques and the angular momentum vector. Again assuming that the wheel in the diagram is rolling into the page, the angular momentum vector measured around the center of mass points to the left (and slightly downward). A counterclockwise net torque gives (through the right hand rule) a torque vector that points out of the page. This causes a change in the angular momentum vector out of the page, according to the second law. For \(\overrightarrow L_{cm}\) to gain a component pointing out of the page, the wheel has to turn left.

It turns out, however, that the change of angular momentum of the spinning wheel about its center is not the only way that this phenomenon is manifest here. In fact, it's not even the greatest contributor to turning-by-leaning. Consider ice skaters. They too change direction by leaning, but they don't have rotating wheels to perform this gyroscopic effect for them. In this case, the diagram is the same (to avoid sketching an entire ice skater, we'll draw just the ice skate): Note that the bicycle has this same thing going on – the center of mass of the bike + rider has an angular momentum relative to the point where the wheel contacts the ground, and leaning to one side or the other will turn the entire system, not just the wheel.

Let's return to the original example of the precession of a wheel pivoted about an end of its axle. The torque remains constant in magnitude, which means that the angular momentum vector changes at a constant rate – the wheel therefore precesses around the pivot at a constant rate. Let's see if we can determine the rate of this precession, i.e. its rotational velocity around the vertical axis (not around the axle of the wheel - we already know that). Rather than try to slog through all the vector calculus, let's do this by following our circular motion analogy.

Figure 6.2.5 depicts a stone tied to a string going in a counterclockwise circle at a constant speed. The four diagrams are snapshots of the motion at four different times, separated by one-eight of a rotational period. Below each diagram is a depiction of the net force vector on the stone and its linear momentum vectors at that moment in time (note these vectors are always perpendicular, as they should be).

Figure 6.2.5 – Force and Momentum Vectors for Stone in Circular Motion That's quite compact! Okay, let's follow precisely this path for the precessing wheel. We start with a similar diagram of a top view (gravity is acting into the page). The main difference that jumps out between Figure 6.2.5 and Figure 6.2.6 is that for the stone, the momentum is tangent to the circle while the force is radial, while for the wheel, the angular momentum is radial and the torque is tangent. Other than that, however, these follow each other exactly – the force/torque is perpendicular to and "leads" the momentum, as they both revolve together. Given that they follow the same behavior and have exactly the same differential relationship (the force/torque is the time derivative of the momentum), it's perfectly reasonable to expect that the rotational frequency would have the same relationship. Namely:

If you are not comfortable with this "derivation by analogy," then you can reach the same result quickly using Equation 6.2.2.  The rate at which the wheel is spinning about its axle doesn't change, which means that the magnitude of its angular momentum remains constant, and the first term is zero. Solving the remainder of the equation for the rate at which the direction is changing requires only a division of both sides by the magnitude of the angular momentum, giving the same result as above.

A wheel whose axis is vertical (i.e. the plane of the wheel is parallel to the ground) rotates clockwise as viewed by someone looking down at it. If a small nudge is given to the top of the axis of this wheel toward the south, which way does the top of the axis move in its immediate response to this nudge?

Using the RHR, the clockwise rotation when looking down on it corresponds to an angular momentum vector that points downward. Imagine you are facing the spinning wheel from the north side (i.e. you are facing south), and push it at its top with the fingers of your right hand pointing upward. Your right hand will curl such that your thumb is pointing to the left, and that is the direction of the torque you are imparting on the wheel. The angular momentum vector that points down will change in the direction of the torque, so the axis of the wheel will tilt such that its bottom rotates in the direction of your thumb, which means the top of the axis will rotate the other way (to your right). If you are facing south, then a tilt to the right is toward the west.

A central force is a force (which can act on many objects) that is directed directly toward or directly away from a single fixed point in space.

And from the preceding discussion, we saw that whenever the force vector is parallel to the position vector, if we choose the “source” of the force to be our reference point, we conclude:

Central forces do not exert torques (relative to the central point) on the objects they influence, and therefore angular momentum around the central reference point is conserved.

A rock is tied to a \(0.50m\) string whose other end is held fixed at the origin, and is then set into circular motion in the \(x–y\) plane (there is no gravity present). While the rock is moving at a constant speed in a circle, the force described above is turned on. At one moment the rock (still under the influence of the string and the force above) is moving at a speed of \(4.0\frac{m}{s}\), when suddenly the string breaks. A little while later, the rock crosses the \(+x\)-axis a distance \(2.5m\) from the origin at a speed of \(5.8\frac{m}{s}\). Find the angle the velocity vector of the rock makes with the \(x\)-axis at this time.

This force can be rewritten in terms of the position vector relative to the origin as:

Clearly this force points directly away from a single point (the origin), which makes it a central force. This means that it exerts no torque around the origin, which also means that it cannot change the angular momentum relative to this point. When the force is turned on, it therefore has no effect on the speed of the rock while the rock remains attached to the string. When the string breaks, the rock will neither follow a straight line, nor will it maintain a constant speed, but with only the central force acting on it, the angular momentum remains constant. We can easily compute the angular momentum it started with. It is:

When the rock reaches the \(x\)-axis, its position on the axis and the angle its velocity vector makes with the axis are related to the perpendicular distance \(r_\bot\), as can be seen in this diagram: