An ellipse is a figure that can be drawn by sticking two pins in a sheet of paper, tying a length of string to the pins, stretching the string taut with a pencil, and drawing the figure that results. During this process, the sum of the two distances from pencil to one pin and from pencil to the other pin remains constant and equal to the length of the string. This method of drawing an ellipse provides us with a formal definition, which we shall adopt in this chapter, of an ellipse, namely:

An ellipse is the locus of a point that moves such that the sum of its distances from two fixed points called the foci is constant (see figure II.6).

The longest axis of the ellipse is its major axis, and a little bit of thought will show that its length is equal to the length of the string; that is, \(2a\). The shortest axis is the minor axis, and its length is usually denoted by \(2b\). The eccentricity is related to the ratio \(b/a\) in a manner that we shall shortly discuss.

is called the ellipticity if the ellipse. It is merely an alternative measure of the noncircularity. It is related to the eccentricity, and we shall obtain that relation shortly, too. Until then, Figure \(\text{II.7}\) shows pictorially the relation between the two. and this is the Equation to the ellipse. The reader should be able, after a little bit of slightly awkward algebra, to show that this can be written more conveniently as

The reader can also now derive the relation between ellipticity \(η\) and eccentricity \(e\):

In figures \(\text{II.9}\) I have drawn ellipses of eccentricities 0.1 to 0.9 in steps of 0.1, and in figure \(\text{II.10}\) I have drawn ellipses of ellipticities 0.1 to 0.9 in steps of 0.1. You may find that ellipticity gives you a better idea than eccentricity of the noncircularity of an ellipse. For an exercise, you should draw in the positions of the foci of each of these ellipses, and decide whether eccentricity or ellipticity gives you a better idea of the "ex-centricity" of the foci. Note that the eccentricities of the orbits of Mars and Mercury are, respectively, about 0.1 and 0.2 (these are the most eccentric of the planetary orbits except for comet-like Pluto), and it is difficult for the eye to see that they depart at all from circles - although, when the foci are drawn, it is obvious that the foci are "ex-centric". \(\text{FIGURE II.9}\): The number inside each ellipse is its eccentricity. \(\text{FIGURE II.10}\): The figure inside or below each ellipse is its ellipticity.

The distance \(\text{F}_2 \ \text{A}\) is the aphelion distance Q (pronounced ap-helion by some and affelion by others − and both have defensible positions), and it is equal to

A line parallel to the minor axis and passing through a focus is called a latus rectum (plural: latera recta). The length of a semi latus rectum is commonly denoted by \(l \)(sometimes by \(p\)). Its length is obtained by putting \(x = ae\) in the Equation to the ellipse, and it will be readily found that

The circle whose diameter is the major axis of the ellipse is called the eccentric circle or, preferably, the auxiliary circle (figure \(\text{II.11}\)). Its Equation is In orbit theory the angle \(v\) (denoted by \(f\) by some authors) is called the true anomaly of a planet in its orbit. The angle \(E\) is called the eccentric anomaly, and it is important to find a relation between them.

is on an ellipse of semi major axis \(a\) and semi minor axis \(b\). These two Equations can be regarded as parametric Equations to the ellipse. They can be used to describe an ellipse just as readily as

and indeed this Equation is the \(E\)-eliminant of the parametric Equations.

In figure \(\text{II.11}\), the distance \(r\) is called the radius vector (plural radii vectores), and from the theorem of Pythagoras its length is given by

The inverse formulas may also be useful:

There are a number of miscellaneous geometric properties of an ellipse, some, but not necessarily all, of which may prove to be of use in orbital calculations. We describe some of them in what follows.

Tangents to an Ellipse

The answer to this question is to be found by substituting \(mx + c\) for \(y\) in the Equation to the ellipse. After some rearrangement, a quadratic Equation in \(x\) results:

is tangent to the ellipse. Now the product of the slopes of two lines that are at right angles to each other is \(−1\) (Equation 2.2.17). Therefore, if we replace \(m\) in the above Equation by \(−1/m\) we shall obtain another tangent to the ellipse, at right angles to the first one. The Equation to this second tangent becomes (after multiplication throughout by \(m\) )

If we eliminate \(m\) from these two Equations, we shall obtain an Equation in \(x\) and \(y\) that describes the point where the two perpendicular tangents meet; that is, the Equation that will describe a curve that is the locus of the point of intersection of two perpendicular tangents. It turns out that this curve is a circle of radius \(\sqrt{a^2 + b^2}\), and it is called the director circle. 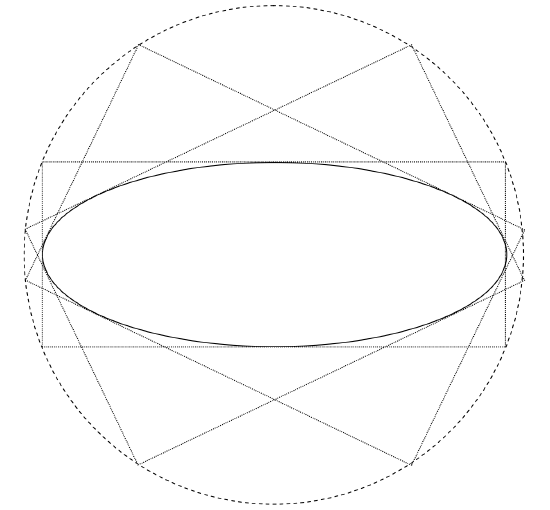 The ellipse has the property that, for any point \(\text{P}\) on the ellipse, the ratio of the distance \(\text{PF}_2\) to a focus to the distance \(\text{PN}\) to a directrix is constant and is equal to the eccentricity of the ellipse. Indeed, this property is sometimes used as the definition of an ellipse, and all the Equations and properties that we have so far derived can be deduced from such a definition. We, however, adopted a different definition, and the focus-directrix property must be derived. This is straightforward, for, (recalling that the abcissa of \(\text{F}_2\) is \(ae\)) we see from figure \(\text{II.14}\) that the square of the desired ratio is

Another interesting property of the focus and directrix, although a property probably with not much application to orbit theory, is that if the tangent to an ellipse at a point \(\text{P}\) intersects the directrix at \(\text{Q}\), then \(\text{P}\) and \(\text{Q}\) subtend a right angle at the focus. (See figure \(\text{II.15}\)).

The left hand of figure \(\text{II.16}\) shows a circle and two perpendicular diameters. The right hand figure shows what the circle would look like when viewed at some oblique angle. The circle has become an ellipse, and the diameters are no longer perpendicular. The diameters are called conjugate diameters of the ellipse. One is conjugate to the other, and the other is conjugate to the one. They have the property - or the definition - that each bisects all chords parallel to the other, because this property of bisection, which is obviously held by the perpendicular diameters of the circle, is unaltered in projection.

No book on elementary applied mathematics is complete without a ladder problem. A ladder of length \(a + b\) leans against a smooth vertical wall and a smooth horizontal floor. A particular rung is at a distance \(a\) from the top of the ladder and \(b\) from the bottom of the ladder. Show that, when the ladder slips, the rung describes an ellipse. (This result will suggest another way of drawing an ellipse.) See figure \(\text{II.17}\). If you have not done this problem after one minute, here is a hint. Let the angle that the ladder makes with the floor at any time be \(E\). That is the end of the hint.

The reader may be aware that some of the geometrical properties that we have discussed in the last few paragraphs are more of recreational interest and may not have much direct application in the theory of orbits. In the next subsection we return to properties and Equations that are very relevant to orbital theory - perhaps the most important of all for the orbit computer to understand.

Polar Equation to the Ellipse From the cosine formula for a plane triangle,

On equating these expressions we soon obtain

The left hand side is equal to the semi latus rectum \(l\), and so we arrive at the polar Equation to the ellipse, focus as pole, major axis as initial line: