We are here probably considering a small sphere falling slowly through a viscous liquid, with laminar flow around the sphere, rather than a skydiver hurtling through the air. In the latter case, the airflow is likely to be highly turbulent and the resistance proportional to a higher power of the speed than the first.

We'll use the symbol \( y\) for the distance fallen. That is to say, we measure \( y\) downwards from the starting point. The equation of motion is

where \( g\) is the gravitational acceleration.

To obtain the first time integral, we write the equation of motion as

DON'T! In the middle of an exam, while covering this derivation that you know so well, you can suddenly find yourself in inextricable difficulties. The thing to note is this. If you look at the left hand side of the equation, you will anticipate that a logarithm will appear when you integrate it. Keep the denominator positive! Some mathematicians may know the meaning of the logarithm of a negative number, but most of us ordinary mortals do not - so keep the denominator positive!

This is illustrated in Figure VI.5. Students will have seen equations similar to this before in other branches of physics - e.g. growth of charge in a capacitor or growth of current in an inductor. That is why learning physics becomes easier all the time, because you have seen it all before in quite different contexts. Perhaps you have already noticed that third-year physics is easier than second-year physics; just think how much easier fourth-year is going to be! At any rate, \( v\) approaches the terminal speed asymptotically, never quite reaching it, but reaching half of the terminal speed in time \( \frac{\ln2}{\gamma}=\frac{.693}{\gamma}\) (you have seen that before while studying radioactive decay), and reaching (\( 1-e^{-1}\)) = 63% of the terminal speed in time \( \frac{1}{\gamma}\).

If the body is thrown downwards, so that its initial speed is not zero but is \( v=v_{0}\) when \( t=0\), you will write the equation of motion either as Equation \( \ref{eq:6.3.10}\) or as Equation \( \ref{eq:6.3.11}\), depending on whether the initial speed is slower than or faster than the terminal speed, thus ensuring that the denominator is kept firmly positive. In either case, the result is 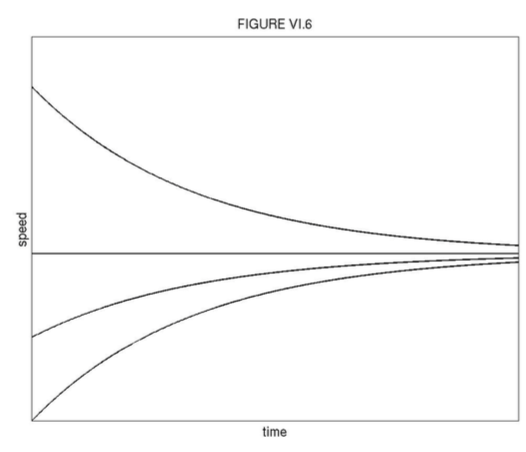 Returning to the initial condition \( v=0\) when \( t=0\), we readily find the second time integral to be

You should check whether this equation is what is expected for when \( t=0\) and when \( t\) approaches infinity. The second time integral is shown in Figure VI.7. The space integral is found either by eliminating t between the first and second time integrals, or by writing \( \ddot{y} \) as \( v\frac{dv}{dy}\) in the equation of motion:

This is illustrated in Figure VI.8. Notice that the equation gives \( y\) as a function of \( v\), but only and suddenly we find that it is not as easy as expected!

The equation can be written

For Newton-Raphson iteration we need

and, after some rearrangement, the Newton-Raphson iteration \( (t\rightarrow t-\frac{f}{f'})\) becomes

The Newton-Raphson process \( (t\rightarrow t-\frac{f}{f'})\), after some algebra, arrives at

This time Newton-Raphson does not allow us the luxury of an exceedingly stupid first guess, but we know that the answer must lie between 0 and 5 m s-1 , so our moderately intelligent first guess can be \( v\)=2.5ms-1 .

Draw, by computer, a graph showing \( t\) (the dependent variable, plotted vertically) versus y (plotted horizontally) for the five values of \( \gamma\) in question 3.

These four problems are in order of increasing difficulty. The first is merely an exercise in solving an implicit equation (Equation \( \ref{eq:6.3.14}\)) numerically, and might serve as an introductory example of how, for example, to solve an equation by Newton-Raphson iteration (I make the answer 1.8656 s.) The last two, if started from scratch, could well take up an entire afternoon before it is solved to one's complete satisfaction. It might be observed that the graphs of question 4 could be drawn fairly easily by calculating \( y\) explicitly as a function of \( t\), thus obviating the necessity of Newton-Raphson iteration. No such short cuts, however, can be made for constructing the table of question 3.

In fact I solved questions 3 and 4 in just a few minutes − but I did not start from scratch. As you progress through your scientific career, you will become aware that there are certain operations that you encounter time and time again. To do questions 3 and 4, for example, you need to be able to solve an equation by Newton-Raphson iteration; you need to be able to construct a table of a function \( y=f(x\quad;\quad a)\), or in this case \( t=f(y\quad;\quad \gamma)\); and you need to be able to instruct a computer to draw graphs of tabulated values. I learned long ago that all of these are problems that crop up frequently, and I therefore long ago wrote short programs (only a few lines of Fortran each) for doing each of them. All I had to do on this occasion was to marry these existing programs together, tailored to the particular functions needed. Likewise a student will recognize similar problems for which he or she frequently needs a solution. You should accumulate and keep a set of these small programs for use in the future whenever you may need them. For example, this is by no means the last time you will need Newton-Raphson iteration to solve an equation. Write a Newton-Raphson program now and keep it for future occasions!