So far we’ve considered a variety of examples in which the metric is predetermined. This is not the case in general relativity. For example, Einstein published general relativity in 1915, but it was not until 1916 that Schwarzschild found the metric for a spherical, gravitating body such as the sun or the earth.

When masses are present, finding the metric is analogous to finding the electric field made by charges, but the interpretation is more difficult. In the electromagnetic case, the field is found on a preexisting background of space and time. In general relativity, there is no preexisting geometry of spacetime. The metric tells us how to find distances in terms of our coordinates, but the coordinates themselves are completely arbitrary. So what does the metric even mean? This was an issue that caused Einstein great distress and confusion, and at one point, in 1914, it even led him to publish an incorrect, dead-end theory of gravity in which he abandoned coordinate-independence.

With the benefit of hindsight, we can consider these issues in terms of the general description of measurements in relativity given in section 3.4:

The main factor that led Einstein to his false start is known as the hole argument. Suppose that we know about the distribution of matter throughout all of spacetime, including a particular region of finite size — the “hole” — which contains no matter. By analogy with other classical field theories, such as electromagnetism, we expect that the metric will be a solution to some kind of differential equation, in which matter acts as the source term. We find a metric \(g(x)\) that solves the field equations for this set of sources, where \(x\) is some set of coordinates. Now if the field equations are coordinate-independent, we can introduce a new set of coordinates x', which is identical to \(x\) outside the hole, but differs from it on the inside. If we reexpress the metric in terms of these new coordinates as \(g'(x')\), then we are guaranteed that \(g'(x')\) is also a solution. But furthermore, we can substitute \(x\) for \(x'\), and \(g'(x)\) will still be a solution. For outside the hole there is no difference between the primed and unprimed quantities, and inside the hole there is no mass distribution that has to match the metric’s behavior on a point-by-point basis. We conclude that in any coordinate-invariant theory, it is impossible to uniquely determine the metric inside such a hole. Einstein initially decided that this was unacceptable, because it showed a lack of determinism; in a classical theory such as general relativity, we ought to be able to predict the evolution of the fields, and it would seem that there is no way to predict the metric inside the hole. He eventually realized that this was an incorrect interpretation. The only type of global observation that general relativity lets us do is measurements of the incidence of world-lines. Relabeling all the points inside the hole doesn’t change any of the incidence relations. For example, if two test particles sent into the region collide at a point x inside the hole, then changing the point’s name to x' doesn’t change the observable fact that they collided.

Another type of argument that made Einstein suffer is also resolved by a correct understanding of measurements, this time the use of measurements in local Lorentz frames. The earth is in hydrostatic equilibrium, and its equator bulges due to its rotation. Suppose that the universe was empty except for two planets, each rotating about the line connecting their centers.13 Since there are no stars or other external points of reference, the inhabitants of each planet have no external reference points against which to judge their rotation or lack of rotation. They can only determine their rotation, Einstein said, relative to the other planet. Now suppose that one planet has an equatorial bulge and the other doesn’t. This seems to violate determinism, since there is no cause that could produce the differing effect. The people on either planet can consider themselves as rotating and the other planet as stationary, or they can describe the situation the other way around. Einstein believed that this argument proved that there could be no difference between the sizes of the two planets’ equatorial bulges. 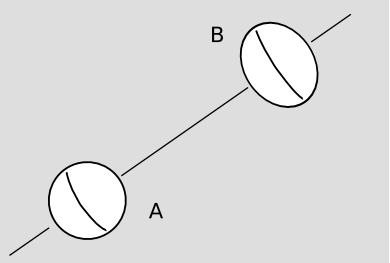 Figure \(\PageIndex{2}\) - A paradox? Planet A has no equatorial bulge, but B does. What cause produces this effect? Einstein reasoned that the cause couldn’t be B’s rotation, because each planet rotates relative to the other.

The example is described in Einstein’s paper “The Foundation of the General Theory of Relativity.” An excerpt, which includes the example, is given in Appendix A.

The flaw in Einstein’s argument was that measurements in local Lorentz frames do allow one to make a distinction between rotation and a lack of rotation. For example, suppose that scientists on planet A notice that their world has no equatorial bulge, while planet B has one. They send a space probe with a clock to B, let it stay on B’s surface for a few years, and then order it to return. When the clock is back in the lab, they compare it with another clock that stayed in the lab on planet A, and they find that less time has elapsed according to the one that spent time on B’s surface. They conclude that planet B is rotating more quickly than planet A, and that the motion of B’s surface was the cause of the observed time dilation. This resolution of the apparent paradox depends specifically on the Lorentzian form of the local geometry of spacetime; it is not available in, e.g., Cartan’s curved-spacetime description of Newtonian gravity.

Einstein’s original, incorrect use of this example sprang from his interest in the ideas of the physicist and philosopher Ernst Mach. Mach had a somewhat ill-defined idea that since motion is only a well-defined notion when we speak of one object moving relative to another object, the inertia of an object must be caused by the influence of all the other matter in the universe. Einstein referred to this as Mach’s principle. Einstein’s false starts in constructing general relativity were frequently related to his attempts to make his theory too “Machian.” Section 8.3 discusses an alternative, more Machian theory of gravity proposed by Brans and Dicke in 1951.