3. The ignition circuit of an automobile is powered by a 12-V battery. How are we able to generate large voltages with this power source?

4. When the current through a large inductor is interrupted with a switch, an arc appears across the open terminals of the switch. Explain.

5. Does self-inductance depend on the value of the magnetic flux? Does it depend on the current through the wire? Correlate your answers with the equation \(NΦ_m=LI\).

7. Discuss how you might determine the self-inductance per unit length of a long, straight wire.

8. The self-inductance of a coil is zero if there is no current passing through the windings. True or false?

9. How does the self-inductance per unit length near the center of a solenoid (away from the ends) compare with its value near the end of the solenoid?

14.4 Energy in a Magnetic Field

12. When the current in the RL circuit of Figure 14.12(b) reaches its final value \(ε/R\), what is the voltage across the inductor? Across the resistor?

13. Does the time required for the current in an RL circuit to reach any fraction of its steady-state value depend on the emf of the battery?

15. At what time is the voltage across the inductor of the RL circuit of Figure 14.12(b) a maximum?

16. In the simple RL circuit of Figure 14.12(b), can the emf induced across the inductor ever be greater than the emf of the battery used to produce the current?

17. If the emf of the battery of Figure 14.12(b) is reduced by a factor of 2, by how much does the steady-state energy stored in the magnetic field of the inductor change?

18. A steady current flows through a circuit with a large inductive time constant. When a switch in the circuit is opened, a large spark occurs across the terminals of the switch. Explain. 14.6 Oscillations in an LC Circuit

21. Do Kirchhoff’s rules apply to circuits that contain inductors and capacitors?

22. Can a circuit element have both capacitance and inductance?

23. In an LC circuit, what determines the frequency and the amplitude of the energy oscillations in either the inductor or capacitor?

24. When a wire is connected between the two ends of a solenoid, the resulting circuit can oscillate like an RLC circuit. Describe what causes the capacitance in this circuit.

25. Describe what effect the resistance of the connecting wires has on an oscillating LC circuit.

26. Suppose you wanted to design an LC circuit with a frequency of 0.01 Hz. What problems might you encounter?

27. A radio receiver uses an RLC circuit to pick out particular frequencies to listen to in your house or car without hearing other unwanted frequencies. How would someone design such a circuit?

(a) What is the mutual inductance of this system?

(b) The outer coil is replaced by a coil of 40 turns whose radius is three times that of the solenoid. What is the mutual inductance of this configuration?

32. A 600-turn solenoid is 0.55 m long and 4.2 cm in diameter. Inside the solenoid, a small (1.1cm×1.4cm), single-turn rectangular coil is fixed in place with its face perpendicular to the long axis of the solenoid. What is the mutual inductance of this system?

36. The current shown in part (a) below is increasing, whereas that shown in part (b) is decreasing. In each case, determine which end of the inductor is at the higher potential.

38. When a camera uses a flash, a fully charged capacitor discharges through an inductor. In what time must the 0.100-A current through a 2.00-mH inductor be switched on or off to induce a 500-V emf?

41. A coil with a self-inductance of 3.0 H carries a current that decreases at a uniform rate \(dI/dt=−0.050A/s\). What is the emf induced in the coil? Describe the polarity of the induced emf. 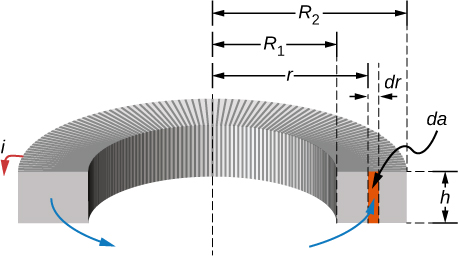 45. What is the self-inductance per meter of a coaxial cable whose inner radius is 0.50 mm and whose outer radius is 4.00 mm?

14.4 Energy in a Magnetic Field

48. Solenoid A is tightly wound while solenoid B has windings that are evenly spaced with a gap equal to the diameter of the wire. The solenoids are otherwise identical. Determine the ratio of the energies stored per unit length of these solenoids when the same current flows through each.

51. A current of 1.2 A is flowing in a coaxial cable whose outer radius is five times its inner radius. What is the magnetic field energy stored in a 3.0-m length of the cable? 54. The current in the RL circuit shown here increases to 40% of its steady-state value in 2.0 s. What is the time constant of the circuit? 55. How long after switch \(S_1\) is thrown does it take the current in the circuit shown to reach half its maximum value? Express your answer in terms of the time constant of the circuit. 56. Examine the circuit shown below in part (a). Determine \(dI/dt\) at the instant after the switch is thrown in the circuit of

(a), thereby producing the circuit of

(b). Show that if I were to continue to increase at this initial rate, it would reach its maximum \(ε/R\) in one time constant.

57. The current in the RL circuit shown below reaches half its maximum value in 1.75 ms after the switch \(S_1\) is thrown. Determine

(a) the time constant of the circuit and (a) the switch S is first closed,

(b) after the currents have reached steady-state values, and

(c) at the instant the switch is reopened (after being closed for a long time). (a) immediately after switch S is closed,

(b) a long time after S is closed,

(c) immediately after S is reopened, and

(d) a long time after S is reopened. 14.6 Oscillations in an LC Circuit

(a) the maximum energy stored in the magnetic field of the inductor,

(b) the peak value of the current, and

(c) the frequency of oscillation of the circuit.

63. The self-inductance and capacitance of an LC circuit are 0.20 mH and 5.0 pF. What is the angular frequency at which the circuit oscillates?

64. What is the self-inductance of an LC circuit that oscillates at 60 Hz when the capacitance is \(10μF\)?

(a) What is the period of the oscillations?

(b) How much time elapses between an instant when the capacitor is uncharged and the next instant when it is fully charged?

(a) What is the frequency of the oscillations?

(b) If the maximum potential difference between the plates of the capacitor is 50 V, what is the maximum current in the circuit?

(a) the frequency of the resulting oscillations,

(b) the maximum charge on the capacitor,

(c) the maximum current through the inductor, and

(d) the electromagnetic energy of the oscillating circuit. 69. An LC circuit in an AM tuner (in a car stereo) uses a coil with an inductance of 2.5 mH and a variable capacitor. If the natural frequency of the circuit is to be adjustable over the range 540 to 1600 kHz (the AM broadcast band), what range of capacitance is required?

71. In an oscillating RLC circuit with \(L=10mH,C=1.5µF,\) and \(R=2.0Ω\), how much time elapses before the amplitude of the oscillations drops to half its initial value?

73. Show that the self-inductance per unit length of an infinite, straight, thin wire is infinite.

74. Two long, parallel wires carry equal currents in opposite directions. The radius of each wire is a, and the distance between the centers of the wires is d. Show that if the magnetic flux within the wires themselves can be ignored, the self-inductance of a length l of such a pair of wires is \(L=\frac{μ_0l}{π}ln\frac{d−a}{a}\). (Hint: Calculate the magnetic flux through a rectangle of length l between the wires and then use \(L=NΦ/I\).) 76. Suppose that a cylindrical solenoid is wrapped around a core of iron whose magnetic susceptibility is \(x\). Using Equation 14.9, show that the self-inductance of the solenoid is given by \(L=\frac{(1+x)μ_0N^2A}{l}\), where I is its length, A its cross-sectional area, and N its total number of turns.

77. The solenoid of the preceding problem is wrapped around an iron core whose magnetic susceptibility is \(4.0×10^3\).

(a) If a current of 2.0 A flows through the solenoid, what is the magnetic field in the iron core?

(b) What is the effective surface current formed by the aligned atomic current loops in the iron core?

(c) What is the self-inductance of the filled solenoid?

(a) What is the self-inductance of the toroid?

(b) If the current through the toroid is 2.0 A, what is the magnetic field at the center of the core?

(c) For this same 2.0-A current, what is the effective surface current formed by the aligned atomic current loops in the iron core? (a) five cycles later and

(a) What voltage is induced to oppose this?

(b) What is unreasonable about this result?

(c) Which assumption or premise is responsible?

(a) Let current in the inner conductor be distributed only on the surface and find the self-inductance.

(b) Let current in the inner cylinder be distributed uniformly over its cross-section and find the self-inductance. Compare with your results in (a).

83. In a damped oscillating circuit the energy is dissipated in the resistor. The Q-factor is a measure of the persistence of the oscillator against the dissipative loss. (a) Prove that for a lightly damped circuit the energy, U, in the circuit decreases according to the following equation. \(\frac{dU}{dt}=−2βU\), where \(β=\frac{R}{2L}\). (b) Using the definition of the Q-factor as energy divided by the loss over the next cycle, prove that Q-factor of a lightly damped oscillator as defined in this problem is \(Q≡\frac{U_{begin}}{ΔU_{one \: cycle}} = \frac{1}{2 \pi R}\sqrt{\frac{L}{C}}\). (Hint: For (b), to obtain Q, divide E at the beginning of one cycle by the change \(ΔE\) over the next cycle.) 85. A square loop of side 2 cm is placed 1 cm from a long wire carrying a current that varies with time at a constant rate of 3 A/s as shown below.

(a) Use Ampère’s law and find the magnetic field as a function of time from the current in the wire.

(b) Determine the magnetic flux through the loop.

(c) If the loop has a resistance of 3Ω, how much induced current flows in the loop?

86. A rectangular copper ring, of mass 100 g and resistance 0.2Ω, is in a region of uniform magnetic field that is perpendicular to the area enclosed by the ring and horizontal to Earth’s surface. The ring is let go from rest when it is at the edge of the nonzero magnetic field region (see below).

(a) Find its speed when the ring just exits the region of uniform magnetic field.