The image below shows the main parts of the ear. The outer ear or pinna captures sound and funnels it into the auditory canal where it reaches the timpanic membrane or eardrum. The eardrum changes the vibrations in the air into mechanical vibrations which travel through as small set of bones called ossicles (the malleus, incus and stapes) in the middle ear. These bones are connected to the cochlea which is in the inner ear. The cochlea changes the mechanical vibrations into nerve impulses that travel to the brain. 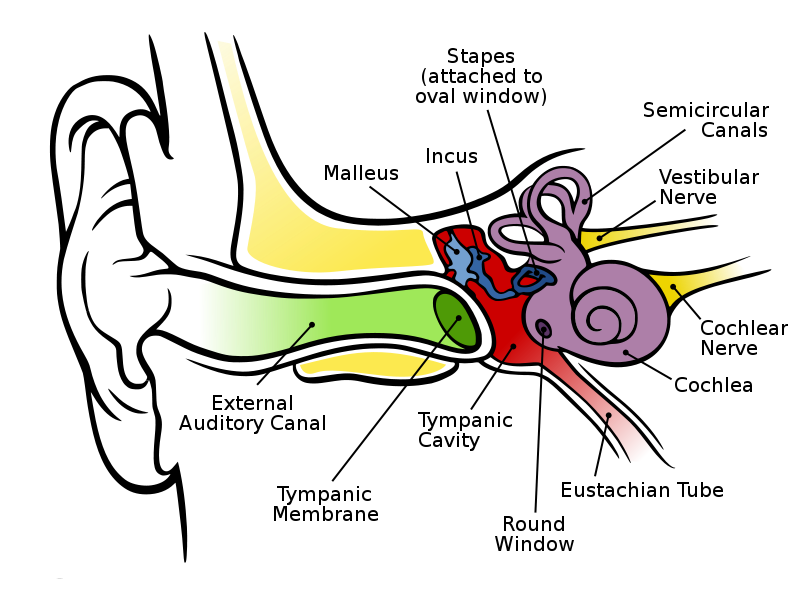 The outer ear or pinna, the part of the ear you can see, funnels sound into the auditory canal which travels to the eardrum. It is thought that the curvature of the outer ear allows us to judge the direction from which sound is coming. Experiments have been done with plastic models of a head with the ears attached backwards or with different shapes and microphones where the auditory canal is located. When recorded sounds from these microphones are played back to a real person using headphones, their sense of where sounds are coming from change drastically, indicating that the shape of the ear does have an effect on the perception of sound direction. A few more comments on how we perceive the direction to a sound source are found in Chapter 16: Acoustics.

When sound reaches the eardrum or tympanic membrane it starts to vibrate. A tiny bone called the mallus is attached to the back of the timpanic membrane and carries the vibrations to the incus and then to the stapes. The stapes connects to the cochlea so that vibrations in the three bones cause fluid in the cochlea to move.

Air vibrates more easily than fluid in the cochlea so there is a problem getting energy to move from the air into the liquid inside the cochlea. The problem of getting vibrational energy to move from a medium to one with different transmission properties is called impedance mismatch and we will talk about this in more detail when we talk about musical instruments. The structure of the middle ear has two mechanisms to overcome this problem. The three bones (together called ossicles) act like levers so that a small movement of the timpanic membrane becomes a larger movement of the stapes. The ratio is about \(1\) to \(1.3\), in other words, if the eardrum moves \(1\text{ mm}\) the end of the stapes connected to the cochlea moves \(1.3\text{ mm}\). Recall from chapter one that pressure is proportional to area. The eardrum has \(17\) times the area of the base of the stapes. Because of the difference in size between the eardrum and the base of the stapes and the extra leverage in the ossicles the pressure at the cochlea is \(17\times 1.3 = 22\) times the pressure on the eardrum. These two mechanisms overcomes the problem of impedance mismatch between the air at the eardrum and the fluid in the cochlea.

The three bones in the middle ear also have muscles attached to them. If a very loud sound comes into the ear the muscles tense up in an automatic reflex to dampen the vibrations of the three bones. This helps protect the inner ear from damage from sudden intense sounds.

The cochlea has two functions. The three semicircular canals are oriented at \(90\text{ degrees}\) to each other and give us our sense of balance. The canals are filled with a fluid. When we move our head the inertia of the fluid causes it to remain stationary while the body moves. This relative motion causes small hairs at locations called ampulla inside the canals to be bent, sending signals to the brain via the vestibular nerve. Two other locations, the utricle and the saccule have similar arrangements of small hairs that detect motion. There are three canals to account for rotational motion along three axes; left to right rotational head motion, up down head motion and tilting head motion to the left or right. The bending of the hair cells in the five ampulla due to motion of the head is shown in the picture on the right. 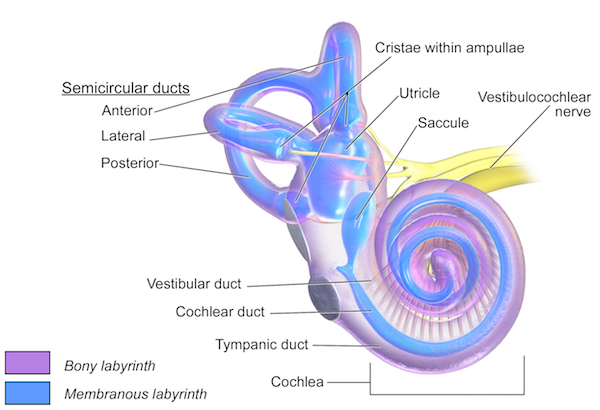 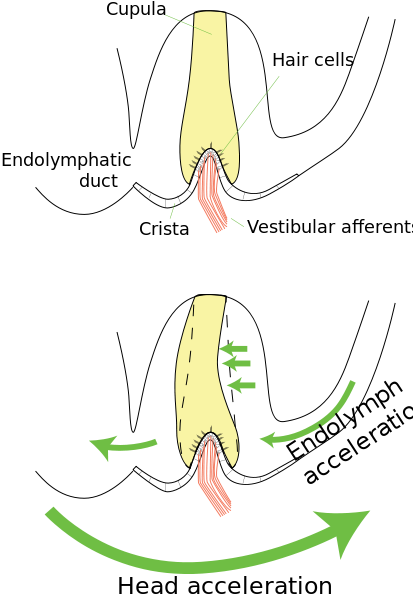 The second function of the cochlea is to convert mechanical vibrations of the fluid inside into nerve impulses that we perceive as sound. The cochlea is basically one long tube, folded over so that sounds go up one side (the scala visibuli) and back down the other (the scala tympani). Vibrations start at the oval window where the stapes is attached and travel through the tube to the apex, then go down the other side until they reach the round window. The tube is coiled and embedded in the bones of the head. The round window is a thin, flexible membrane that keeps pressure from getting too high inside the cochlea. The section between the two halves is called the basilar membrane. The basilar membrane is thickest at the apex where the tube doubles back in the other direction and thinnest at the oval and round window end. 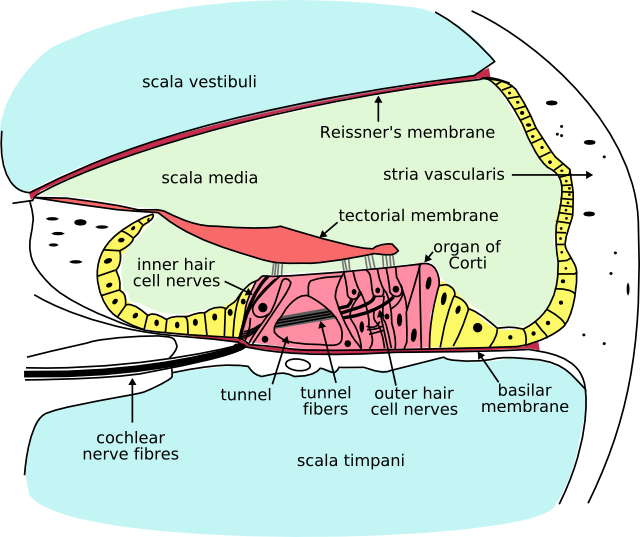 There are about \(16,000\) hair cells on the basilar membrane. Two sets of hairs are found at each location on the basilar membrane, both of which are connect to nerve cells. Bending of the hairs causes a chemical channel to open and the nerve sends a signal to the brain along the auditory nerve. The inner hair cells are mainly responsible for hearing a particular frequency. The outer hair cells also bend and cause nerve impulses to be formed when the basilar membrane vibrates. These impulses, however, act to modify the signals being sent by the inner hair nerve cells. The result of this is a single signal being sent to the brain with information about the frequency being heard.

One interesting property of the outer hair cells is that they react to incoming sound by contracting. This contraction can actually produce sound that can be detected outside the ear. It is possible that the produced sound acts to reinforce and sharpen the response of the inner hair cells. The process of the ear producing sound is called otoacoustic emission and can be used to test for hearing loss. Sharp clicking sounds can be presented to the ear (including the ears of babies and children too young to respond to a hearing test) and if the ear is working correctly, there will be a sound response coming from back from the ear that can be detected with a small microphone near the ear.