Hearing loss can occur at several points along the path between outer ear and nerve impulse sent to the brain. If the outer ear fills up with wax or is damaged, fewer vibrations will reach the ear drum. Very loud sounds may damage or even burst the eardrum. Although a burst eardrum usually grows back, it may grow back with scar tissue that changes its ability to vibrate properly. The inner surfaces of the middle ear can also be damaged by loud sounds and some diseases (for example inner ear infections). This may cause scars to form in the middle ear region that block or modify the transmission of vibrations along the bone passageway.

Another type of hearing loss involves problems with the three bones in the middle ear. If they become disconnected (which could happen because of a very loud sound) or if they get calcium deposits due to aging they may not effectively transmit vibrations to the cochlea. The above types of hearing loss are called conductive losses and they sometimes can be repaired by surgery.

Damage to the cochlea or the auditory nerve generally cannot be fixed by surgery. This type of hearing loss is called sensorineural loss. If a very loud vibration causes the stapes to pierce the cochlea vibrations will no longer be efficiently transmitted to the hair nerve cells. Likewise a very large vibration inside the cochlea may break the hair cells so that they can no longer bend in response to vibrations of the basilar membrane. Aging also affects the hairs by making them gradually become stiffer. This means they do not react the same way to vibrations of the basilar membrane or may even break off.

Everyone gradually loses some of their hearing as they get older. Age related hearing loss is called presbycusis and is the most common form of hearing loss after damage done by loud sounds. Both exposure to loudness and aging generally affect higher frequency perception more than lower frequencies. The typical \(25\) year old male has lost about \(15\text{ dB}\) for frequencies above \(6,000\text{ Hz}\) and the \(25\) year old female has lost \(5\text{ dB}\) in the same frequency range. Recall that doubling the loudness (two instruments instead of one) is a \(3\text{ dB}\) increase so decreasing your hearing ability by \(3\text{ dB}\) decreases the perceived intensity by about half. By the time you reach \(55\) years of age the average person has lost about \(30\text{ dB}\) in loudness for frequencies above \(4,000\text{ Hz}\) if you are male and \(10\text{ dB}\) if female. On the other hand, frequencies under \(1000\text{ Hz}\) are generally not affected much by aging. 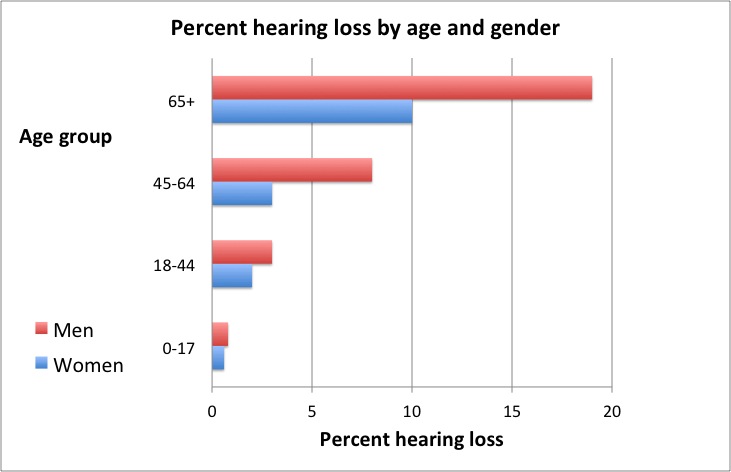 Some types of hearing loss can be overcome by amplifying the sounds before they enter the middle ear. This is done by the use of battery operated hearing aids. Hearing aids generally only amplify sound and so may not be helpful if the loss of hearing is in a certain frequency range. For Sensorineural loss it may be possible to implant wires directly into the cochlea or the auditory nerve region and attaching an external microphone. This is called a cochlear implant.