The ear-brain system is a complex instrument. Currently there are two overlapping theories of how we hear; the place theory of hearing and the temporal theory of hearing. Neither of these concepts alone appears to be sufficient to explain the richness of auditory phenomena that we experience.

We know from the structure of the cochlea that different parts resonate at different frequencies; the end closest to the stapes resonates at high frequencies and the end furthest from the ossicles resonates at low frequencies. Nerves are connected to hairs located along the cochlea which are stimulated when vibrations are present. A logical conclusion is that each place in the cochlea corresponds to the perception of a given frequency. This is called the place theory of hearing

How might the place theory work? Below is a screen shot from the driven springs simulation you experimented with in Chapter 4. There are five masses but only one (number two) has very much of an amplitude at a driving frequency of \(1.5\text{ Hz}\). If we drive the masses at a different frequency one of the other masses will have a large amplitude but not mass number two. In other words mass number two has a resonance frequency at \(1.5\text{ Hz}\). (Go back and experiment with the simulation if you don't remember what was going on in this simulation.).

We can imagine this as a model of the cochlea, straightened out with the stapes end on the right. The less massive parts of the cochlea (to the left- opposite of the masses in the simulation) have high resonance frequencies and the part furthest from the ossicles (to the right in the picture) have lower frequency resonance. A given frequency presented to the cochlea only causes motion in one part of the cochlea. This part of the cochlea sends a nerve impulse to the brain and we perceive that frequency. 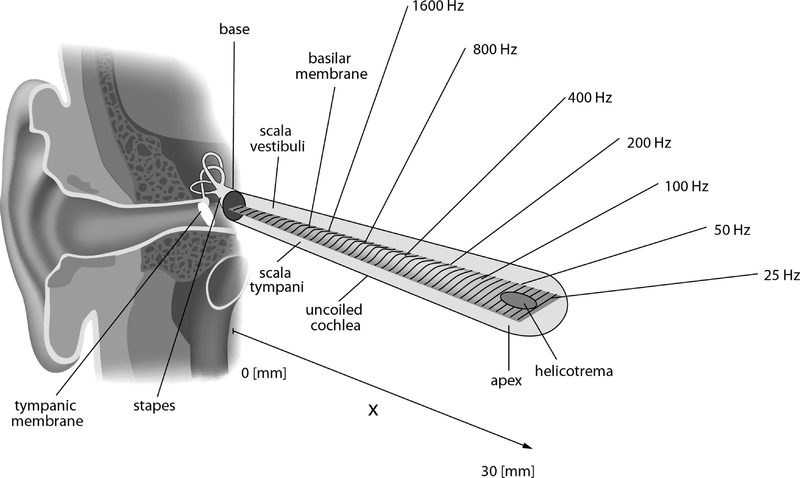 A problem with the place theory is that the resonance curves turn out to be very broad and they overlap, as shown in the graph below (compare with the resonance graph of amplitude versus frequency in Chapter 4). In other words the sections of the cochlea are low Q-factor resonators. This would seem to make it very difficult for the ear to pick out frequencies which are close together but we know that the just noticeable difference in frequency is about \(1\text{ Hz}\) for frequencies lower than \(1000\text{ Hz}\) for most people. If the place theory of hearing was correct we would expect that changing the frequency from, say \(250\text{ Hz}\) to \(240\text{ Hz}\) would shift the region of the basilar membrane that vibrates and trigger different nerve cells. But what actually happens is that the region that vibrates at \(250\text{ Hz}\) overlaps with the region that vibrates at \(240\text{ Hz}\) to such an extent that pretty much the same nerves are firing. The figure below shows four nearly overlapping resonance curves for four different frequencies. 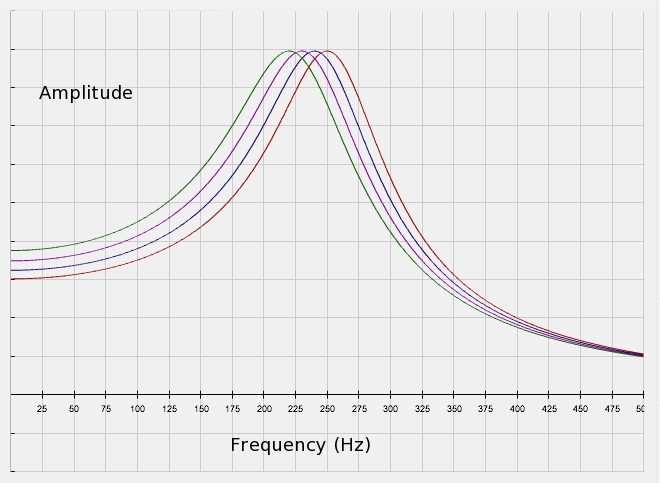 We also know from the uncertainty principle, discussed in Chapter 9, that a sharp resonance would mean less information about the duration of the sound. If sharp resonance peaks (high Q-factor for the cochlea) were the mechanism that enabled us to hear frequencies that are close together, we would not be able to hear sudden changes in frequency. But we are easily able to hear frequencies that change in less than a tenth of second so the resonance peaks cannot be very sharp which means the place theory cannot be the whole story of how we hear different frequencies.

A possible explanation to save the place theory might be that neighboring nerves are inhibited by the nerve firing at the center of the excited region. This is known to happen in touch and vision (for example our touch sensation is more localized than the actual number of skin cells that are activated) but has not been shown to happen in hearing.