One reason that polarization is important is that the polarization state of an electromagnetic wave can be easily manipulated. Two of the most important devices for such manipulation are polarizers and wave plates.

For the transverse oscillations of a string, a polarizer is simply a slit that allows the string to oscillate in one transverse direction but not in the perpendicular direction.

For electromagnetic waves, the most familiar example of a polarizer, Polaroid, was invented by Edwin Land over 50 years ago, partly in experiments done in the attic of the Jefferson Physical Laboratory, where he worked as an undergraduate at Harvard. The idea of polaroid is to make material that conducts electricity (poorly) in one direction, but not in the other. Then the electric field in the conducting direction will be absorbed (the energy going to resistive loss), while the electric field in the nonconductive direction will be unaffected. One way of doing this is to make sheets of polymer (polyvinyl alcohol) stretched (to align the polymer molecules along a preferred axis) and doped with iodine (to allow conduction along the polymer molecules).2

“Wave plates” are optical elements that change the relative phase of the two components of \(Z\). Wave plates are possible because there are materials in which the index of refraction depends on the polarization. This property is called “birefringence.” It can happen in various ways.

For example, the transparent polymer material cellophane is made into thin sheets by stretching. Because of the stretching, the polymer strands tend to be oriented along the stretch direction. The dielectric constant in this material depends on the direction of the electric field. It is easier for charges to move along the polymer strands than across them. Thus the dielectric constant is larger for electric fields in the stretch direction.

The same effect may arise because of the inherent structure of a transparent crystal. An example is the naturally occurring mineral, calcite, a crystalline form of calcium carbonate, \(CaCO_{3}\). Crystals of calcite have the fascinating property of splitting a beam of unpolarized light into its two polarization states. Birefringence can even be produced mechanically, by stressing a transparent material, squeezing the electronic structure in one direction.

Note that in general the phase difference, \(\Delta \phi\), depends on the frequency of the light. Even if \(n_{x}\) and \(n_{y}\) depend on frequency, it would be a bizarre accident if that dependence canceled the \(\omega\) dependence from the explicit factor of \(\omega\) in (12.39). Figure \( 12.5\): Initially unpolarized light passing through a pair of crossed polarizers with a wave plate in between.

and the second polarizer absorbs it.

It is this frequency dependence that produces the interesting patterns of color that you see when you put cellophane or a stressed piece of plastic between polarizers.

represent polarizers along the 1 and 2 axes respectively.

The discussion of (12.39) shows that in general, a wave plate will only be a quarter wave plate for light of a definite frequency. 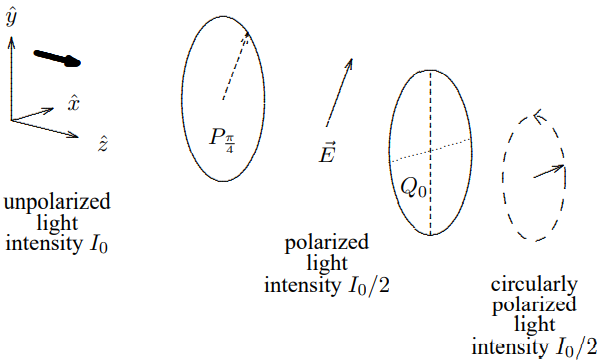 “Optical activity” is a property of many organic and some inorganic compounds. An optically active material rotates the polarization of light without absorbing either component of the polarization. A familiar example of such a material is corn syrup, a thick aqueous solution of sugar that you probably have in your kitchen. If you put a rectangular container of corn syrup between polarizers, as shown in Figure \( 12.7\), and rotate the second polarizer until the intensity of the light getting through is a maximum, you will find that direction of the second polarizer is not the same as that of the first. The plane of the polarization has been rotated by some angle \(\theta\). The rotation angle, \(\theta\), is proportional to the thickness of the container, the length of the region of syrup that the light goes through. Figure \( 12.7\): A rectangular container of corn syrup between polarizers.

Clearly, the optical activity of corn syrup cannot depend on crystal structure, because the stuff is a perfectly uniform liquid, completely invariant under rotations in three-dimensional space. It can have no special axes, or any such thing. Optical activity must work very differently from birefringence.

You can find a clue to the nature of optical activity by considering what it looks like if you look at it in a mirror. If you reflect the system illustrated in Figure \( 12.7\) in the \(x\)-\(z\) plane, by changing the sign of all the \(y\) coordinates, the angle \(\theta\) changes to −\(\theta\). Thus the corn syrup that you see in a mirror must be fundamentally different from the corn syrup in your kitchen. This is not so strange. After all, your right hand looks like a left hand when you look at it in a mirror. The corn syrup must have the same property and have a definite “handedness.” In fact, because of the tetrahedral bonding of the carbon atoms of which they are built, the sugar molecules in the corn syrup can and do have such a handedness.

We can now use our matrix language to see how this leads to optical activity. Up to an irrelevant overall phase, we can choose the phase produced on the left-circularly polarized light to be −\(\theta\) and that on the right-circularly polarized light to be \(\theta\). Then we can represent the action of the syrup on an arbitrary wave by the matrix \[e^{-i \theta} P_{+}+e^{i \theta} P_{-} ,\]

One might wonder about the reason for the handedness of the sugar molecules. In fact, there are physical processes, the weak interactions that give rise to \(\beta\)-radioactivity, that look different when reflected in a mirror3 and thus in principle could distinguish between left-handed and right-handed molecules. However, these interactions are most likely irrelevant to the handedness of corn syrup. Probably, the reason is biology rather than physics. Long ago, when the beginnings of life emerged from the primordial soup, purely by accident, the right-handed sugars were used. From then on, the handedness was maintained by the processes of reproduction. But compare this with the apparently similar situation in which the second polarizer transmits light polarized at \(45^{\circ}\) in the \(x\)-\(y\) plane, as shown in Figure \( 12.9\). Now the wave description tells us that the intensity in region \(III\) is reduced by another factor of 2 from that in region \(II\). This is impossible to interpret in terms of classical particles. To see this, it is only necessary to turn down the intensity so that only one photon comes through at a time. Then the first polarizer is OK. As before, if the photon is polarized in the \(x\) direction, it get through. But now what happens at the second polarizer. The photon cannot split up. Either it gets through or it doesn’t. To be consistent with the wave description, in which the intensity is reduced by another factor of two, the transmission at the second polarizer must be a probabilistic event. Half the time the photon gets through. Half the time it is absorbed. There is no way for the photon in region \(II\) to tell whether it is going to make it! It is random. God plays dice.

2 See Sears, Zemansky and Young, page 813.
3 They violate what is called “parity” symmetry.