Uniform circular motion is a motion in a circular path at constant speed.

Under uniform circular motion, angular and linear quantities have simple relations. When objects rotate about some axis, each point in the object follows a circular arc. The rotation angle is the amount of rotation and is analogous to linear distance. We define the rotation angle \(\mathrm{Δθ}\) to be the ratio of the arc length to the radius of curvature:

Angle θθ and Arc Length ss: The radius of a circle is rotated through an angle \(\mathrm{Δθ}\). The arc length \(\mathrm{Δs}\) is described on the circumference.

Under uniform circular motion, the angular velocity is constant. The acceleration can be written as:

This acceleration, responsible for the uniform circular motion, is called centripetal acceleration.

Any force or combination of forces can cause a centripetal or radial acceleration. Just a few examples are the tension in the rope on a tether ball, the force of Earth’s gravity on the Moon, friction between roller skates and a rink floor, a banked roadway’s force on a car, and forces on the tube of a spinning centrifuge.

Newton’s universal law of gravitation states that every particle attracts every other particle with a force along a line joining them.

Newton’s universal law of gravitation states that every particle in the universe attracts every other particle with a force along a line joining them. The force is directly proportional to the product of their masses and inversely proportional to the square of the distance between them. For two bodies having masses mm and MM with a distance rr between their centers of mass, the equation for Newton’s universal law of gravitation is:

The gravitational force is responsible for artificial satellites orbiting the Earth. The Moon’s orbit about Earth, the orbits of planets, asteroids, meteors, and comets about the Sun are other examples of gravitational orbits. Historically, Kepler discovered his 3 laws (called Kepler’s law of planetary motion) long before the days of Newton. Kepler devised his laws after careful study (over some 20 years) of a large amount of meticulously recorded observations of planetary motion done by Tycho Brahe (1546–1601). Kepler’s 3rd law is equivalent to:

\(\mathrm{T}\) is the period (time for one orbit) and \(\mathrm{r}\) is the average radius. We shall derive Kepler’s third law, starting with Newton’s laws of motion and his universal law of gravitation. We will assume a circular path (not an elliptical one) for simplicity.

Let us consider a circular orbit of a small mass mm around a large mass \(\mathrm{M}\), satisfying the two conditions stated at the beginning of this section. Gravity supplies the centripetal force to mass \(\mathrm{m}\). Therefore, for a uniform circular motion:

Substituting this into the previous equation gives:

In an “ideally banked curve,” the angle \(\mathrm{θ}\) is chosen such that one can negotiate the curve at a certain speed without the aid of friction.

For ideal banking, the net external force equals the horizontal centripetal force in the absence of friction. The components of the normal force \(\mathrm{N}\) in the horizontal and vertical directions must equal the centripetal force and the weight of the car, respectively. In cases in which forces are not parallel, it is most convenient to consider components along perpendicular axes—in this case, the vertical and horizontal directions. 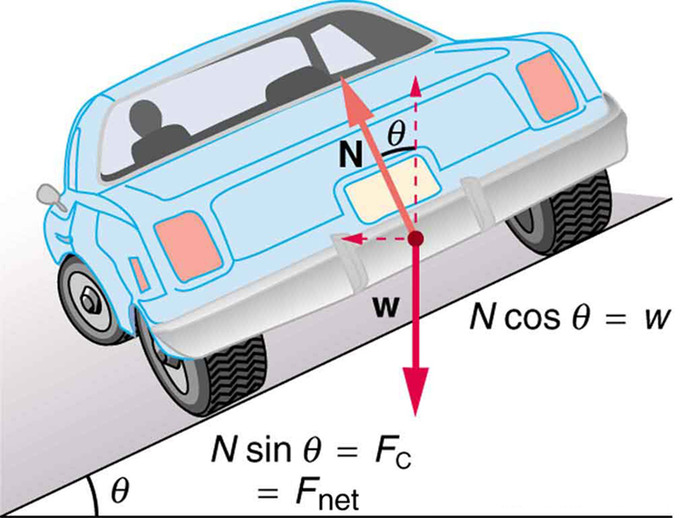 Car on a Banked Curve: The car on this banked curve is moving away and turning to the left.

Above is a free body diagram for a car on a frictionless banked curve. The only two external forces acting on the car are its weight ww and the normal force of the road \(\mathrm{N}\). (A frictionless surface can only exert a force perpendicular to the surface—that is, a normal force. ) These two forces must add to give a net external force that is horizontal toward the center of curvature and has magnitude \(\mathrm{\frac{mv^2}{r}}\). Only the normal force has a horizontal component, and so this must equal the centripetal force—that is:

Because the car does not leave the surface of the road, the net vertical force must be zero, meaning that the vertical components of the two external forces must be equal in magnitude and opposite in direction. From the figure, we see that the vertical component of the normal force is \(\mathrm{N \cos ⁡θ}\), and the only other vertical force is the car’s weight. These must be equal in magnitude, thus:

Dividing the above equations yields:

for an ideally banked curve with no friction.