Atoms with more than one electron, such as Helium (He) and Nitrogen (N), are referred to as multielectron atoms. Hydrogen is the only atom in the periodic table that has one electron in the orbitals under ground state.

In hydrogen-like atoms (those with only one electron), the net force on the electron is just as large as the electric attraction from the nucleus. However, when more electrons are involved, each electron (in the nn-shell) feels not only the electromagnetic attraction from the positive nucleus, but also repulsion forces from other electrons in shells from ‘1’ to ‘nn‘. This causes the net force on electrons in the outer electron shells to be significantly smaller in magnitude. Therefore, these electrons are not as strongly bonded to the nucleus as electrons closer to the nucleus. This phenomenon is often referred to as the Orbital Penetration Effect. The shielding theory also explains why valence shell electrons are more easily removed from the atom. The size of the shielding effect is difficult to calculate precisely due to effects from quantum mechanics. As an approximation, the effective nuclear charge on each electron can be estimated by: \(\mathrm{Z_{eff}=Z−σZ}_\text{eff} = \mathrm{Z} – \sigma \), where \(\mathrm{Z}\) is the number of protons in the nucleus and σ\sigma is the average number of electrons between the nucleus and the electron in question. σ\sigma can be found by using quantum chemistry and the Schrodinger equation or by using Slater’s empirical formula.

For example, consider a sodium cation, a fluorine anion, and a neutral neon atom. Each has 10 electrons, and the number of nonvalence electrons is two (10 total electrons minus eight valence electrons), but the effective nuclear charge varies because each has a different number of protons:

As a consequence, the sodium cation has the largest effective nuclear charge and, therefore, the smallest atomic radius.

A periodic table is the arrangement of chemical elements according to their electron configurations and recurring chemical properties.

A periodic table is a tabular display of the chemical elements, organized on the basis of their atomic numbers, electron configurations, and recurring chemical properties. Elements are presented according to their atomic numbers (number of protons) in increasing order. The standard form of the table comprises an eighteen by seven grid or main body of elements, positioned above a smaller double row of elements. The table can also be deconstructed into four rectangular blocks: the s-block to the left, the p-block to the right, the d-block in the middle, and the f-block below that. The rows of the table are called periods. The columns of the s-, d-, and p-blocks are called groups, some of which have names such as the halogens or the noble gases.

Since, by definition, a periodic table incorporates recurring trends, any such table can be used to derive relationships between the properties of the elements and predict the properties of new elements that are yet to be discovered or synthesized. As a result, a periodic table, in the standard form or some other variant, provides a useful framework for analyzing chemical behavior. Such tables are widely used in chemistry and other sciences. 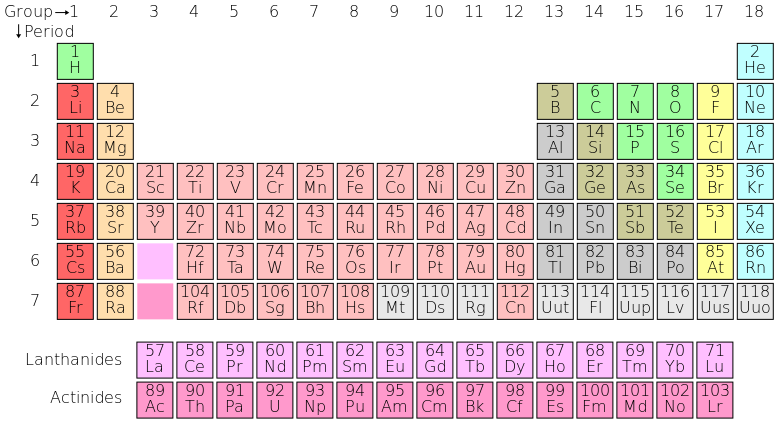 Periodic Table of Elements: The standard form of the periodic table, where the colors represent different categories of elements

The Specifics of the Periodic Table

All versions of the periodic table include only chemical elements, rather than mixtures, compounds, or subatomic particles. Each chemical element has a unique atomic number representing the number of protons in its nucleus. Most elements have differing numbers of neutrons among different atoms: these variants are referred to as isotopes. For example, carbon has three naturally occurring isotopes. All of its atoms have six protons and most have six neutrons as well, but about one percent have seven neutrons, and a very small fraction have eight neutrons. Isotopes are never separated in the periodic table. They are always grouped together under a single element. Elements with no stable isotopes have the atomic masses of their most stable isotopes listed in parentheses.

All elements from atomic numbers ‘1’ (hydrogen) to ‘118’ (ununoctium) have been discovered or synthesized. Of these, elements up through californium exist naturally; the rest have only been synthesized in laboratories. The production of elements beyond ununoctium is being pursued. The question of how the periodic table may need to be modified to accommodate any such additions is a matter of ongoing debate. Numerous synthetic radionuclides of naturally occurring elements have also been produced in laboratories.

Although precursors exist, Dmitri Mendeleev is generally credited with the publication of the first widely recognized periodic table in 1869. He developed his table to illustrate periodic trends in the properties of the elements known at the time. Mendeleev also predicted some properties of then-unknown elements that were expected to fill gaps in the table. Most of his predictions were proved correct when the elements in question were subsequently discovered. Mendeleev’s periodic table has since been expanded and refined with the discovery or synthesis of more new elements and the development of new theoretical models to explain chemical behavior. The electron configuration is the distribution of electrons of an atom or molecule in atomic or molecular orbitals.

In atoms, electrons fill atomic orbitals according to the Aufbau principle (shown in ), stated as: a maximum of two electrons are put into orbitals in the order of increasing orbital energy—the lowest-energy orbitals are filled before electrons are placed in higher-energy orbitals. As an example, the electron configuration of the neon atom is 1s2 2s2 2p6 or [He]2s2 2p6, as diagramed in. In molecules, the situation becomes more complex, as each molecule has a different orbital structure. The molecular orbitals are labelled according to their symmetry, rather than the atomic orbital labels used for atoms and monoatomic ions: hence, the electron configuration of the diatomic oxygen molecule, O2, is 1σg2 1σu2 2σg2 2σu2 1πu4 3σg2 1πg2. According to the laws of quantum mechanics, for systems with only one electron, an energy is associated with each electron configuration and, upon certain conditions, electrons are able to move from one configuration to another by emission or absorption of a quantum of energy, in the form of a photon.

Electronic configuration of polyatomic molecules can change without absorption or emission of photon through vibronic couplings.