Recall that kinetic energy is described by the mass of the object and its speed. For rotating bodies there must be an analog to kinetic energy as well. We already have a relationship between linear and angular speed, which we can use to redefine kinetic energy for rotational motion. Let us simplify our wheel example by observing a few point masses rotating on a massless rod as shown in Figure 7.4.1 below. The pivot shown in the figure defines a fixed point about which the object rotates. In some cases it is an obvious choice, such as in this example since we are assuming rod is help in place at a pilot. In other examples a rotating object might not be fixed at a particular point, but will still rotate about the center-of-mass of the object, which we will discuss later. 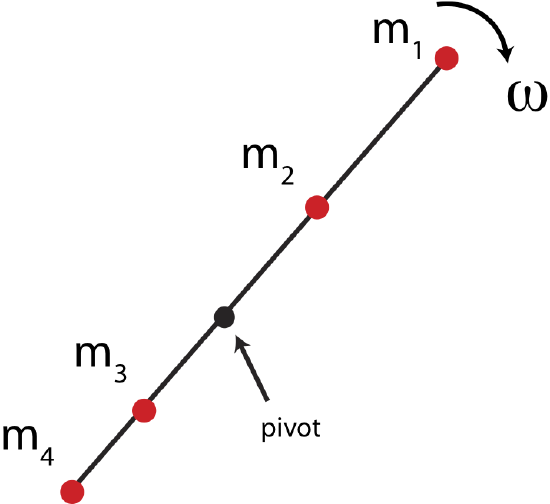 In this scenario the total kinetic energy of the rotating object is the sum of the kinetic energies of the four masses shown. For mass 1, \(m_1\), we can write down the kinetic energy in terms of linear speed, and then use the relationship between angular and linear speeds, \(v_1=r_1\omega\), where \(r_1\) is the distance from the pivot to the location of \(m_1\):

The expression is similar for all the other masses, using the appropriate distances from the pivot and recognizing that all masses will rotate with the same angular velocity, \(\omega\). The total kinetic energy for this rotating object would be the sum of all the individual kinetic energies:

In general, for a set of N masses, the kinetic energy of a rotating object about a fixed pivot becomes:

Let us now use the result in Equation \ref{KE-4ms} to write down the rotational analog of kinetic energy:

where I, is the rotational inertia of a object consisting of point masses:

In general, most objects are not made-up of point masses but are continuous mass. Equation \ref{Ipoint} is a sum which can be turned into an integral in the limit of infinitesimally small mass increments when the mass becomes continuous:

So for a ring and a disk stacked upon each other and rotating about the symmetry axis of both, the rotational inertia is: