Field of a Magnetic Dipole

The attraction and repulsion occur because the there is a field created by one dipole that points in the direction outward from the positive charge, and the field gets weaker with distance, so the other dipole will feel a net force according to whichever of the two charges is closer to the dipole creating the field. In magnetism, we call the end of the magnet from which emerges the outward-going field lines the north pole, and the end into which the field lines converge the south pole. From the figures above, it's clear that the dipoles whenever like poles are brought together, and attract when opposite poles are brought together.

Okay, so this looks like a reasonable explanation for how magnets work, so if we want to isolate the two individual magnetic charges (a "north charge" and a "south charge"), all we have to do is cut the magnet in half, right?

Figure 4.3.2a – Isolating Magnetic Charges from a Magnet – An Attempt 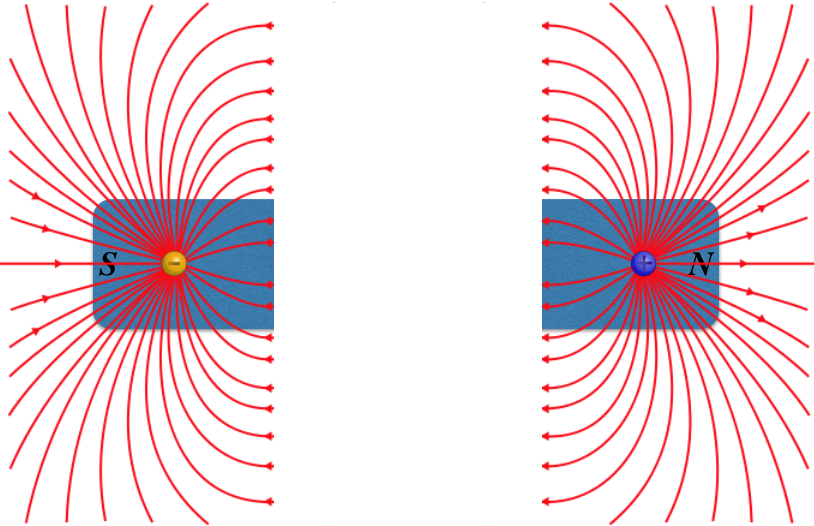 Well, try as we might, this never happens. Instead, every time we cut a magnet with two poles into two pieces, we just get two more magnets with two poles!

Figure 4.3.2b – Isolating Magnetic Charges from a Magnet – What Actually Happens

Outside the dipoles, the fields look the same, but they are clearly different, which we can characterize in the following way:

Put another way, unlike electric fields which form their dipole fields from two monopoles, there don't seem to be any magnetic monopoles. Or at least we have never been able to detect a magnetic monopole, despite many decades of experimental search for them. It turns out that electromagnetic theory doesn't exclude the possibility of the existence of these point charges of magnetism, but ultimately our theories have to agree with what we observe in experiments, so at least for the moment (and for the duration of this class), we will maintain the position that they simply don't exist.

The revelation that our theory of magnetism doesn't include individual magnetic charges has an immediate consequence for the magnetic equivalent of Gauss's law. With magnetic field lines always forming closed loops, any field line that penetrates a Gaussian surface going in one direction (say going into the volume bounded by the surface) must later emerge from that closed surface later in order to form the closed loop. If there is a field line exiting a surface for every field line that enters it, then the net flux must necessarily always be zero. Of course, from Gauss's law, this means that there can never be any charge enclosed, and this makes sense, given that there is no magnetic charge!

Mathematically, we express this Gauss's law for magnetism in either integral or local form:

Field of a Moving Point Charge

When we first started discussing magnetism, we noted a force between two current-carrying wires. From there, we focused on the fact that a magnetic field affects only moving electric charges, but it should be equally clear that the source of a magnetic field must also be moving electric charges. One might object that we just said that magnetic fields don't have point sources, so what difference does it make that we insist that the point source be moving? We will see that this makes all the difference, because this leads to a field that doesn't point directly toward or away from that charge – the direction of the field is determined by the direction of the velocity vector.

Putting all these features together, and including physical constants to make the units work out correctly, we get the following summary:

The physical constant that makes the units work out for the force is called the permeability of free space:

Yes, that is exactly \(4\pi\) in that constant. The unit of Tesla was constructed to come out to Newtons, which explains why the \(4\pi\) cancels-out in Biot-Savart's law. One might wonder why we bother to introduce the constant this way at all, and the answer to this question will become clear later. Right now the short answer is that it will parallel very closely the role that \(\epsilon_o\) plays in electricity.

While it is not obvious from the final form of the equation for the magnetic field, the resulting field is a circle centered at the line passing through the charge along the direction of motion: 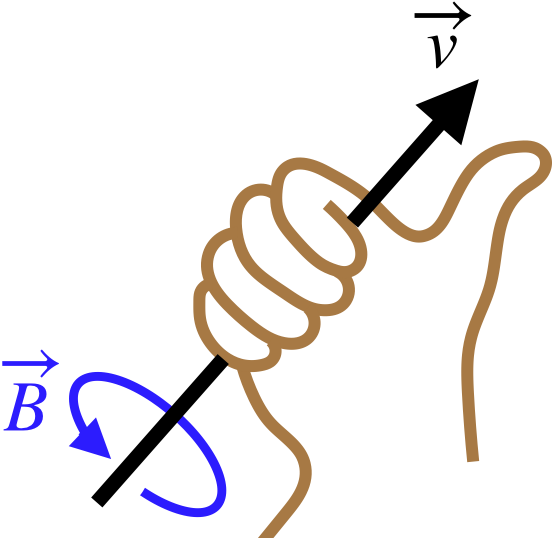 Field of a Current-Carrying Wire

It is far more common to have physical situations where a magnetic field is created by a current-carrying wire than by a point charge. Fortunately, we already know how to convert from moving point charges to current elements:

We therefore get this for a line of current from the law of Biot & Savart:

We can now use this result to continue building our "toolbox" of reusable solutions of common physical sources.