Figure \(\PageIndex{2}\): The muscle in the upper leg gives the lower leg an angular acceleration and imparts rotational kinetic energy to it by exerting a torque about the knee. \(F\) is a vector that is perpendicular to \(r\). This example examines the situation. Figure \(\PageIndex{3}\): (a) An ice skater is spinning on the tip of her skate with her arms extended. Her angular momentum is conserved because the net torque on her is negligibly small. In the next image, her rate of spin increases greatly when she pulls in her arms, decreasing her moment of inertia. The work she does to pull in her arms results in an increase in rotational kinetic energy. 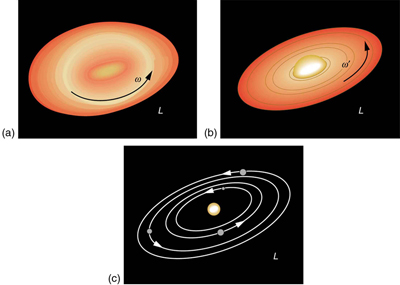 Figure \(\PageIndex{4}\): The Solar System coalesced from a cloud of gas and dust that was originally rotating. The orbital motions and spins of the planets are in the same direction as the original spin and conserve the angular momentum of the parent cloud.