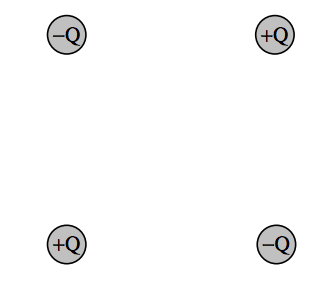 etc., and its matrix representation is

For a continuous charge distribution with charge density \(ρ\) coulombs per square metre, the components will be given by \(q_{xx}=\int \rho x^2 d\tau \), etc., where \(d\tau\) is a volume element, given in rectangular coordinates by \(dx\,dy\,dz\) and in spherical coordinates by \(r^2\sin θ\,dr\,dθ\,dφ\). The SI unit of quadrupole moment is C m2, and the dimensions are L2Q, By suitable rotation of axes, in the usual way (see for example section 2.17 of Classical Mechanics), the matrix can be diagonalized, and the diagonal elements are then the eigenvalues of the quadrupole moment, and the trace of the matrix is unaltered by the rotation.