After all this tedious algebra, let us look at a possible physical realization of such a system. In order to do that, I shall have to talk a little bit about semi-conductors. A semiconductor is a quantum system where the so-called valence electrons completely fill a valence band, and are separated by a gap from a set of free states in a conduction band. These can both be thought of a continuous set of quantum states. The energy difference between the valence and conduction bands is different for different semi-conductors. This can be used in so-called quantum-well structures, where we sandwich a thin layer of, e.g., \(\ce{GaAs}\) between very thick layers of \(\ce{GaAlAs}\) (Figure \(\PageIndex{1}\)). 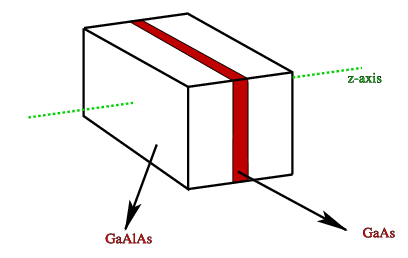 Figure \(\PageIndex{1}\): A schematic representation of a quantum well

Since the gap energy is a lot smaller for GaAs than for GaAlAs, we get the effect of a small square well (in both valence and conduction bands). The fact that we can have a few occupied additional levels in the valence, and a few empty levels in the conduction band can be measured. The best way to do this, is to shine light on these systems, and see for which frequency we can create a transition (just like in atoms).