New and nontrivial phenomena arise when we generalize from 1+1 dimensions to 3+1.

How does a Lorentz boost along one axis, say x, affect the other two spatial coordinates y and z?

First, we can rule out the possibility that such a transformation could have various terms such as \(t' = . . .+ (. . .)y+. . ..\) For example, if the \(t\) coefficient was positive for \(v > 0\), then the laws of physics would be different from the laws that applied in a universe where the y or t axis was inverted, but this would violate parity or timereversal symmetry. This establishes that observers in the two frames agree on the directions of the y and z axes and on simultaneity along those axes when they coincide.

Now suppose that two observers, in motion relative to one another along the x axis, each carry a stick, represented by line segments AB and CD, oriented along the y axis, such that the bases of the sticks A and C coincide at some time. Due to the vanishing of the types of terms in the transformation referred to above, they agree that B and D are collinear with A (and C) at this time. Then by O3 and O4, either B lies between A and D, D lies between A and B, or B=D. That is, they must agree whether the sticks are equal in length or, if not, then on whose is longer. This would violate L1, isotropy of space, since it would distinguish +x from −x.

Another simple way to obtain this result is as follows. We have already proved that area in the (t, x) plane is preserved. The same proof applies to volume in the spaces \((t, x, y)\) and \((t, x, z)\), hence lengths in the y and z directions are preserved. (The proof does not apply to volume in, e.g., (x, y, z) space, because the \(x\) transformation depends on \(t\), and therefore if we are given a region in (x, y, z), we do not have enough information to say how it will change under a Lorentz boost.)

The complete form of the transformation L(\(v \hat{x}\)), a Lorentz boost along the x axis with velocity v, is therefore:

Based on the trivial nature of this generalization, it might seem as though no qualitatively new considerations would arise in 3+1 dimensions as compared with 1+1. To see that this is not the case, consider Figure \(\PageIndex{1}\). A boost along the x axis tangles up the \(x\) and \(t\) coordinates. A y-boost mingles \(y\) and \(t\). Therefore consecutive boosts along x and y can cause x and y to mix. The result, as we’ll see in more detail below, is that two consecutive boosts along non-collinear axes are not equivalent to a single boost; they are equivalent to a boost plus a spatial rotation. The remainder of this section discusses this effect, known as Thomas precession, in more detail; it can be omitted on a first reading. Gyroscopes and the Equivalence Principle

To see how this mathematical fact would play out as a physical effect, we need to consider how to make a physical manifestation of the concept of a direction in space.

In two space dimensions, we can construct a ring laser, \(\frac{b}{1}\), which in its simplest incarnation is a closed loop of optical fiber with a bidirectional laser inserted in one place (Figure \(\PageIndex{2}\)). Coherent light traverses the loop simultaneously in both directions, interfering in a beat pattern, which can be observed by sampling the light at some point along the loop’s circumference. If the loop is rotated in its own plane, the interference pattern is altered, because the beamsampling device is in a different place, and the path lengths traveled by the two beams has been altered. This phase shift is called the Sagnac effect, after M. Georges Sagnac, who observed the effect in 1913 and interpreted it, incorrectly, as evidence for the existence of the aether.18 The loop senses its own angular velocity relative to an inertial reference frame. If we transport the loop while always carefully adjusting its orientation so as to prevent phase shifts, then its orientation has been preserved. The atomic clocks used in the Hafele-Keating atomic-clock experiment were subject to the Sagnac effect.

Figure \(\PageIndex{2}\) - Inertial devices for maintaining a direction in space: 1. A ring laser. 2. The photon in a perfectly reflective spherical cavity. 3. A gyroscope. 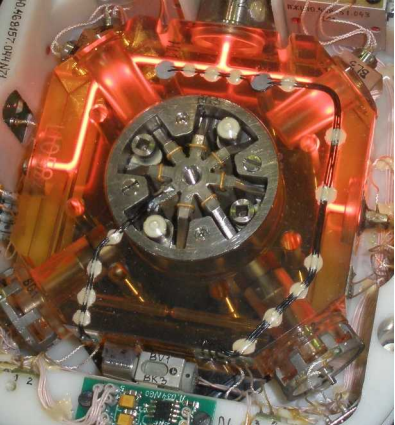 Figure \(\PageIndex{3}\) - A ring laser gyroscope built for use in inertial guidance of aircraft.

In three spatial dimensions, we could build a spherical cavity with a reflective inner surface, and release a photon inside, \(\frac{b}{2}\).

In reality, the photon-in-a-cavity is not very practical. The photon would eventually be absorbed or scattered, and it would also be difficult to accurately initialize the device and read it out later. A more practical tool is a gyroscope (Figure \(\PageIndex{3}\)). For example, one of the classic tests of general relativity is the 2007 Gravity Probe B experiment (discussed in detail in section 5.5 and section 6.2), in which four gyroscopes aboard a satellite were observed to precess due to special- and general-relativistic effects.

The gyroscope, however, is not so obviously a literal implementation of our basic concept of a direction. How, then, can we be sure that its behavior is equivalent to that of the photon-in-a-cavity? We could, for example, carry out a complete mathematical development of the angular momentum vector in relativity.19 The equivalence principle, however, allows us to bypass such technical details. Suppose that we seal the two devices inside black boxes, with identical external control panels for initializing them and reading them out. We initialize them identically, and then transport them along side-by-side world-lines. Nonrelativistically, both the mechanical gyroscope and the photon-gyroscope would maintain absolute, fixed directions in space. Relativistically, they will not necessarily maintain their orientations. For example, we’ve already seen that there are reasons to expect that their orientations will change if they are subjected to accelerations that are not all along the same line. Because relativity is a geometrical theory of spacetime, this difference between the classical and relativistic behavior must be determinable from purely geometrical considerations, such as the shape of the world-line. If it depended on something else, then we could conceivably see a disagreement in the outputs of the two instruments, but this would violate the equivalence principle.

Suppose there were such a discrepancy. That discrepancy would be a physically measurable property of the spacetime region through which the two gyroscopes had been transported. The effect would have a certain magnitude and direction, so by collecting enough data we could map it out as vector field covering that region of spacetime. This field evidently causes material particles to accelerate, since it has an effect on the mechanical gyroscope. Roughly speaking (the reasoning will be filled in more rigorously in Section 4.4), the fact that this field acts differently on the two gyroscopes is like getting a non-null result from an Eötvös experiment, and it therefore violates the equivalence principle. We conclude that gyroscopes \(\frac{b}{2}\) and \(\frac{b}{3}\) are equivalent. In other words, there can only be one uniquely defined notion of direction, and the details of how it is implemented are irrelevant.