As we discussed in the previous section, forces cause objects to move. When a net force acting on a physical system has a component in the direction of its motion, there is work done. Recalling the Energy-Interaction Model, when work is being done Equation 1.2.1 becomes:

When you push a box across the floor, you do work on the box, and the box speeds up. The energy whose indicator is speed is known as kinetic energy, which depends on both speed and mass in the following manner: An object near the surface of the Earth is attracted to the Earth with a force commonly referred to as the force of gravity. This force is proportional to the object’s mass and is nearly constant everywhere on the surface of the Earth. The constant of proportionality is often referred to as “g”, but properly it should have a subscript “E” to indicate that it is the Earth that is interacting with the object, and not, e.g., the moon. If the downward force of gravity is balanced by an upward force acting on the object (object is placed on a surface), then the object’s velocity remains constant (balanced forces). If the object exerting the upward force on the object is a scale or balance, then it reads the “weight” of the object, which is equal in this case of balanced forces, to the gravitational force acting down on the object.

The term weight is often taken to mean the gravitational force. This is OK when forces are balanced and the object’s motion does not change. If the object’s velocity is changing, the weight (what a scale reads) can be very different from the gravitational force. The force of gravity acting on the astronauts in the space shuttle is only slightly less than the force of gravity acting on them when they are standing on Earth, yet they are “weightless” in the orbiting shuttle! (We will study the interesting state of weightlessness in 7B.)

Force of gravity is written as:

Gravitational potential energy, \(PE_g\), exists when two objects interact by the gravitational force. If we are talking about an object near the surface of the Earth and the Earth itself, the energy of this object changes as some other object (perhaps you) does work on the object by raising it to a higher elevation as we saw in Figure 2.3.3. Since the ball and the Earth are interacting, we need to include both in the physical system. Assuming the motion of the ball does not change in this interval (speed is constant throughout), implies that all the work goes into changing the gravitational potential energy. We call this a “potential” energy, because the energy depends only on the relative positions of the object and Earth. It does not depend on the route taken to get to these positions or on the speeds the object and Earth might have. The Energy-Interaction Diagram for the situation in Figure 2.3.3 is: 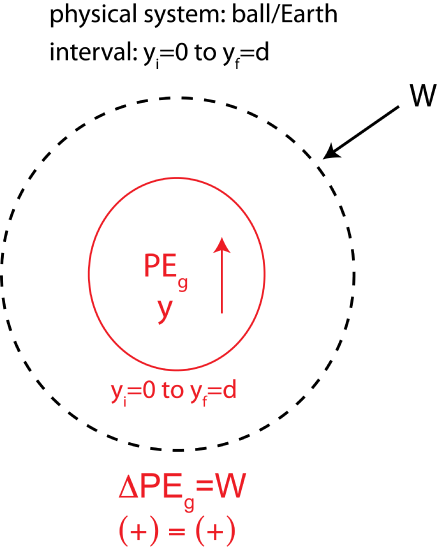 Notice that \(\Delta PE_g \) does not depend on distance moved parallel to the surface of the Earth, but only on the change in vertical distance, since gravitational force points toward the center of the Earth, thus, only has a vertical component.

Instead of lifting the ball, imagine that you now threw it directly upward, giving it some initial speed. You notice that eventually the ball starts to fall back down. Can we figure out the maximum height this ball will reach in term of its initial speed? Let us focus on the interval after the ball was just thrown to its maximum height. At its maximum height, we call d, the speed of the ball goes to zero (in order for an object to turn around, it first has to stop). This situation is depicted in the figure below.

We observe that the ball's kinetic energy decreases, since it slows down and eventually stops at the top of its trajectory. Let us define the physical system to include both the ball and the Earth. If we neglect air friction, we can conclude that the ball/Earth physical system is not interacting with any other objects in the given interval. (Note, the person is not in contact with the ball during this interval.) Therefore, we can conclude that this system is closed, \(\Delta E_{tot}=0\). Since kinetic energy is decreasing, this means that another type of energy must be increasing in the ball/Earth system. It is precisely gravitational potential energy which increases, since the ball's height is increasing.

The Energy-Interaction Diagram for this situation is: Using Equations \ref{kinetic} for KE and \ref{PEg} for PEg we get:

Plugging in values of the indicators for each energy and solving for the maximum height, we find:

One interesting feature of this result is that the maximum height does not depend on the mass of the ball, which at first may seem counterintuitive. How can we explain why a dropped ball hits the ground before a feather dropped at the same time? You will be able to answer this after reading the next subsection. Also, notice that the maximum height is inversely proportional to g. On the moon the value of g is much smaller than on the Earth, this is why astronauts are able to jump much higher on the moon.

You might ask, why did we choose \(y_i=0\) at the height where the ball was thrown? Why not at the ground, which might seem a more logical place for \(y=0\)? When applying the Energy-Interaction Model to various phenomena only the change in a particular energy matters. Our choice of the origin of the coordinate system used to measure “y” does not matter, since we are always subtracting two heights. There will be instances where defining an "absolute" gravitation potential energy, \(PE_g\), rather than a change \(\Delta PE_g\), will be useful. We will see that gravitational potential energy of so many joules will mean it has this amount relative to where we picked the origin of our coordinate system, which is completely arbitrary. We will come back to this point later in Section 2.6.

Let us go back to our example of a person doing work on a box and, thus, increasing its kinetic energy. Instead, let us imagine a situation where the box, while pushed, is moving at a constant speed for some interval. This scenario is plausible from everyday experience. If the box is moving horizontally (\(\Delta PE_g =0\)) and at a constant speed (\(\Delta KE=0\)), implying that \(\Delta E_{tot}=0\), thus the change of energy is zero. So, how can this situation be consistent with the Energy-Interaction Model that states that when work is done on our system there must be a change in the system's energy?

The only solution out of this conundrum is that some other object (except for the person) must be doing work on the system in such a way that it cancels the work done by the person. Another object that the box is interacting with is the surface it is in contact with, which can indeed exert a force, known as friction. Taking friction into account for a box which is moving horizontally at a constant speed, we get:

The force due to friction acts in the opposite direction of motion, \(W_{friction}=-F_{friction}d\), which must be equal and opposite to the work done by the person,

This results in equal and opposite (balanced) forces applied by the person and by the surface generating friction.

Another way to approach this problem is to define the physical system as the box and the surface together. This leaves the person the only outside "object" interacting with our system doing work, \(W_{person}\), on the surface/box physical system. (Note, although the Earth is also interacting with the box, it does not contribute to work when the box moves horizontally, so we do not include it in this scenario.) Since both \(\Delta KE =0\) and (\(\Delta PE_g =0\)) for a box moving horizontally at constant speed, and the net work done is no longer zero for the newly defined physical system, there must be another energy that is changing. We have now included the effects of friction inside our physical system, the interaction between the surface and the box contributes to a thermal energy change of our system. Friction is a complicated force, but for now, we can think about it in terms of subatomic particles applying forces onto each other and, thus, speeding up. As subatomic particles move around faster, the temperature of our system increases, resulting in an increase of thermal energy. The Energy-Interaction diagram for this scenario is: In Chapter 1, we saw that transfer of energy can happen between thermal types of energy. Other transfers of energy can happen between mechanical energies, like ball being throw upward or dropped down (assuming effects of air friction are negligible). And yet, other transfers can occur from mechanical to thermal types of energies, when friction cannot be neglected. If we assume that only mechanical energy transfer is possible for a falling object, the Energy-Interaction Model predicts that a ball and a feather should fall at the same rate, since Equation \ref{thrown.ball} is independent of mass. However, this is clearly not what we observe in our daily experiences. The feather is clearly affected by air friction more than the ball, thus transferring its mechanical energy to thermal energy at a much greater rate.

A roller coaster with mass of 8,000 kg reaches an initial height of 100 m above ground, before plummeting to 10 m above the ground. At the top the roller coaster is at rest. a) Assume the track is frictionless, find the final velocity of the train.

b) You measure the velocity of the train at 10 m to be 2m/s slower compared to what you predicted in part a). Calculate the change in thermal energy of the track/train physical system.

a) The Energy-Interaction Diagram for this process is shown below: The equation below the above Energy-Interaction Diagram in terms of the energy indicators is:

b) The Energy-Interaction Diagram for this process is shown below: The next type energy we take up is so important for future work, that we give it its own model: the Intro Spring-Mass Oscillator Model.